There aren't any release shows this week, but there are still albums making their way online, so we'll be looking at four releases from various artists. --- We'll start today with the latest release from SLC alt-rockers Regiment. There's not a lot to say on the five-piece group, as they've been playing select shows over the past year with only small releases to their name, which includes two EPs and a single that have failed to generate any buzz. The group don't really have a formal Web presence, but have been driving fans to a Jesus-rock-related Website, showing their faith through their music. Earlier this month, the group released the Prodigal Son EP, two tracks that are absolutely free (along with all of their other music) on Bandcamp. 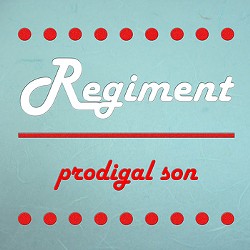 Next up is the debut EP release from The Summer Storm, a solo slowcore project from local producer and musician Nate Housely. Housley has primarily been a behind-the-scenes man for the past few years, but it looks like he's broken out the equipment and created this EP for the masses to check out. You can snag the four-song EP from Bandcamp.

Next up is the latest from King Niko. CW Music Editor Austen Diamond already wrote an in-depth article on the band in this week's issue, so that saves me from having to write a bunch of stuff you already knew. Something that was quietly touched on in the article is that the band have a brand-new single on the market, the song “Guns Up,” which came out this past Tuesday. It's a jumpy little number that shows some progress from the last EP back in late 2010, but what fans really want to see is a brand-new album. How long that will take is only a matter of time, but for now it's nice to hear a taste of what's to come. You can grab a copy for $1 off their Bandcamp page, along with the rest of their discography.

And then, finally, we see the latest release from MC PigPen and Pat Maine! Rather than rehash what we talked about a month ago, I politely direct you to the interview with Pat Maine from my blog back in late December. And while we patiently wait for Maine's new album to drop, we get a taste of it as he collaborates with his favorite MC for this album, The Last Year. If you saw these two at the Utah Arts Festival last year, then you know the kind of performance they (seen above) can deliver, and that action shines on this album as the two play off each other with a fine sampling of beats. 2012 isn't even a month old and we've already got a damned-fine hip-hop album out of it. You can snag the album for just $8 from the duo's Bandcamp page.