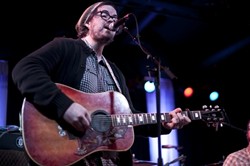 A rare, intimate performance from a treasured troubadour, a passionate, rollicking ride with some Heber rockers and a first look at new material from Utah’s latest major label signees made The State Room showcase this past Saturday one to remember.---

Although we are only halfway through the 2012 CWMAs, seeing Ryan Tanner -- who is usually not a frontman but rather provides support in a number of local bands -- perform his own songs with a cast of skilled players might, quite easily, go down as my overall CWMA highlight this year. The troubadour played around 10 songs, including many of the heartfelt gems off his debut 2011 EP, Seven Years. With a backing band of Dylan Shore (pedal steel, guitar), Paul Jacobsen (banjo), Mark Smith (cello, electric mandolin) and Brian Hardy (keyboard), the songs were delightfully re-imagined, thus creating a lush sonic wall of acoustic strings backing Tanner’s soft croon. And such arrangements make the tunes seem less doleful and gut-wrenching and more emotionally evocative, piercing and perfect. Intermittently, Tanner engaged the crowd with thanks, praise and lots of wry jokes -- including him saying, “Welcome to the CWMAs, or, as I like to call them, the Why is Ryan Tanner Heres?”-- leaving the City Weekly staff hoping that the self-deprecating musician takes the frontman role more frequently.

But Tanner didn’t strictly stick to songs from the EP that landed him in the showcase; he also played a fresh one, written one week ago with friend Dustin Christensen in Nashville, in which he sang, “I’m too tired to fight,” and had that quintessentially humid and twangy Nashville sound. Tanner said this was the first time that the band had actually played together in a live setting, and they pulled it off exquisitely well. (Since they don't have a name, about two beers in, I decided to take liberties in naming them Ryan Tanner & the Bandaloo Bandits, which was the first things that came to mind, for whatever reason. Now, two days removed, I have less conviction it is the “perfect name,” but it seems interesting enough, and, who knows, it's now there's for the taking.) Whatever the name, they also played a tune from Tanner’s former band, Atherton, the title track from the 2007 Skyline Motel, along with Peter Gabriel’s “Washing of the Water” and, quite possibly the best song of the night, “My Madeleine.”


The humble Heber rockers Holy Water Buffalo came on next and cranked things up a notch. The four-piece brought their Wasatch County contingency out in full force for their punchy set. I’ve managed to see them intentionally and by accident 10 or so times of late, and this was their best performance yet. They unleashed songs from their 2010 self-titled debut, including “I’m Alright (It’s Heavy),” “Hands of Dust” “What is Love,” a new jammin’ tune and a couple of heavy instrumentals. 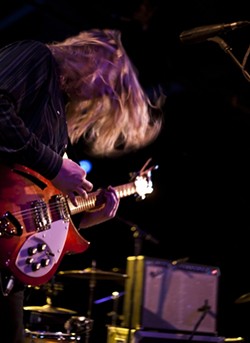 Holy Water Buffalo’s strongest asset is their passion -- from the moment they took the stage, they owned it, and held the audience captive. The tunes are no-frills, straight-up-rock numbers, and once the band continues to develop their songwriting and create more complex arrangements, along with keeping up with their solid work ethic (and amazing hair!), they have more potential for upward growth than many other Utah bands currently going. This is their second year in the CWMAs, and it will be exciting to see where they go from here. The set ended with an all-out jam on “What is Love,” one where frontman Tommy Brunson broke his guitar’s low E string -- no easy feat!


The evening was then taken away by Fictionist, whose set was marked by a couple of exquisite old tunes and the willingness to try out mostly new creations, although the band seemed to lack conviction behind several of them. The Provo-based Atlantic Records signees are in a churn-and-burn phase of songwriting, one where frontman Stuart Maxwell said they needed, "to write 5,000 songs to get five." I have no doubt that the five they land on will be some finely crafted, atmospheric ballads with special attention to the sonic pallate -- after all, one of Fictionist’s strongest assets is their skill with creating interesting tones and sounds -- yet, it might require taking some of the best parts from the songs they displayed on Saturday or a little editing.

The third song of the evening -- the title wasn’t said, or I didn’t catch it -- was their best new one, followed in close second by what I think was called “Tired Ghost.” Other new tunes like “Protector” and “Complicated Cover-up” seemed too poppy, too hurried and too full of Chris Cornell-esque screaming in between non-sticky lyrics. Overall, the band’s stage presence didn’t convince me they like all of the new songs all that much, either. But this was a perfect venue to experiment and be musically vulnerable by sharing works in progress, and, for that, I applaud them.


When Ficitonist did play their old material, like “Swept Away” or encored with “Invisible Hand,” they owned the stage, and affirmed that there might not currently be a better rock band in Utah.

All photos by Dom Darling.