An evening that starts with an indie-afrobeat orchestra, turns towards funky jazz and fried-chicken eating and ends up with everything and everyone covered in glitter -- what more could you ask for on the last night of the 2012 City Weekly Music Awards?---

The No-Nation Orchestra got things off to a fine start. However, at 12 musicians deep, the volume of personnel -- and mics -- proved difficult for the sound system, as there was an abundance of feedback and muddied melodies throughout the set. Despite the circumstances, the band played a couple of gems, like set-opener “More, More, More,” off of the 2011 EP of the same title. The tune has loads of warm tones, interesting syncopation and unfolds with a bevy of breakdowns, and, like many of No-Nation’s tunes, it caps out at well over five minutes, giving plenty of breathing room for frontman Stephen Chai’s vision to unfold. “Holy, Holy” and “Find Me the Savory Sound” were the best songs of the night; similarly, they the golden arrows in the band’s somewhat small quiver. The other songs from the set share an interesting thread: They were super-engaging on the front end, but as the groove and melodies settled, they seemed to plateau -- perhaps, because of an inability to articulate the tune due to sound constraints tonight. It left me thinking that if No-Nation were to trim a little fat in a few songs, and cut down on numbers (get rid of two horn players -- keep the baritone sax and trumpet -- and one of the back-up singers) they would become a tour de musical force in town.

While the music changed to the more hard-bop/funk realm next with The Chickens, the musicians didn’t necessarily change. About 40% of the septet also played in No-Nation (and many of Laserfang’s members played in both of those bands). As the sound issues were resolved, for the most part, the band played punchy tracks from their 2011 self-titled debut, such as “Carlos Caliente” and “4-inch Lift” to start off the set. These are ace players, but the audience was distracted by the one-off frontman Brad McCarley. Before the show, McCarley wrote a Facebook post to foreshadow: “I guarantee you'll say, ‘Wow, that was really ... something.’” Yup, exactly. With a John Travolta-meets-Soultrain-meet-pro-wrestler stage persona, McCarley basked in all the glories of being a frontman without any of the responsibilities -- namely, he got to dance, act crazy and engage the crowd without actually singing or playing an instrument. He even sat on stage during the thick and nasty cut “Eggs” -- the best song of the set -- and ate a bucket of fried chicken, after which he said, “At this point of the show, we give a skinny bitch a piece of fried chicken -- who’s hungry?” And the women he invited on stage just so happened to be vegetarian. The Chickens’ meaty tracks are about as far from silky tofu as it gets though, as heard on more live tracks that came off of their album, like “Afro Pete” and “Tusker,” their most afro-beat numbers. They also pulled out Primus’ “John the Fisherman,” which band leader Dan Nelson said they would be recording today, Sunday Feb. 12, with the engineer who produced the original. 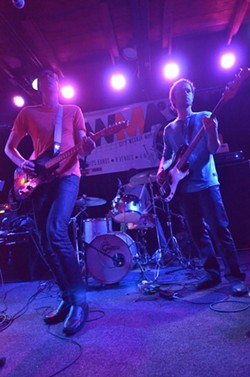 And if the mild crowd didn’t quite know what to do on the dance floor with those funky jazz sounds, they sure did when Urban Lounge favorites Laserfang took the stage. With confidence and swagger, the band produced rich, synthy bass lines along with melodic synth accouterments that exploded from the speakers -- I love the description from their Website: “Escape from NY meets Talking Heads, and then grew up on punk rock together.” That along with Shane Asbridge’s shout-singing lyrics were enough to make the dance floor erupt into a commotion of closed eyes, swinging hips and pumping fists. Oh, and how could I forgot: glitter and face paint -- both of which were provided to anyone fancying a little decoration. And as the five-piece kicked up “Master Control Program” -- a rollicking tune that extends past the seven-minute mark -- a stunning light show was produced. Perhaps Salt Lake City’s premiere live-band experience, Laserfang unfolded giant tunes from their 2010 debut Mammoth well past 1 a.m. -- a sonic roller coaster of epic proportions.