Anthony Green’s show on Friday night at The Complex was a diverse showcase of his many musical projects past and present and a stirring example of a multitalented musician completely in his element.---

Green, the frontman of alternative-rock band Circa Survive, was backed by indie-folk band Good Old War, with whom he collaborated to create his most recent solo album, Beautiful Things. The same musical chemistry heard on the album was also present in the fun jam vibe between Green, Keith Goodwin, Tim Arnold and Daniel Schwartz during the show.

For his set, Green pulled a nearly equal number of songs from both Avalon (2008), his first solo album, and Beautiful Things. Starting out with two oldies, “She Loves Me So” and “Babygirl,” and then transitioning into new tunes “If I Don’t Sing” and “Moon Song” was a nice arc across the two projects and encapsulated the progression of Green’s solo material. Although his solo work is typically characterized by mellower vocals, for this night's show he cranked up his unearthly screams like a man possessed.

A particularly lovely moment during the show was when Good Old War exited the stage to allow Green to play two songs acoustically, “James’ Song” and a wistful version of “How It Goes,” both from Beautiful Things. After playing through the entirety of “James’ Song” (about Green’s young son) to an almost completely silent crowd, he said, “Thanks so much for being so quiet through these more serious songs. I think that’s like the ultimate sign of respect.”

Surprises during the set included “Seven Years,” a fan favorite from Green’s days as the vocalist for post-hardcore band Saosin, with Dan Schwartz backing him on an acoustic guitar. There was also a grooved-out, Good Old War-style version of Circa Survive’s “Get Out” (from Blue Sky Noise), as well as Casey Crescenzo of The Dear Hunter lending his guitar-playing chops on a couple of tunes. A cover of “Diamond Eyes” by the Deftones was a creative, effective interpretation.

Salt Lake City was the second-to-last stop on Green’s tour in support of Beautiful Things. During the show, he said that even though he was tired and looking forward to a break from touring, he was going to miss the opportunity to play his solo songs. He also thanked the crowd for supporting “me, my family and my friends.” 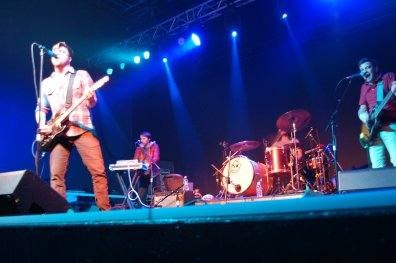 The concert was a rare chance to see the charismatic musician perform free from the style of any one of the many bands he’s been involved with, and, instead, present his own introspective solo songs, along with reinvented gems from his diverse musical career, with incredible stage presence.