The tradition of March is to arrive like a lion, and that's no different with the music, as we have eight local releases to talk about today in what's looking to be a very active month. --- First off, we're going to start with a surprise release from the band Bramble. We haven't heard a lot from them since their 2010 debut EP H.A.G.S. and the departure of Chaz Prymek and Steve Schmit from the group later that same year. Since that time, the group has pressed on, being led by James Miska and Ian Accord with random SLC musicians filling in from time to time as performances warranted. Some of you film-fest fans may have seen them playing the streets of Park City as they do every year when Sundance kicks off. By all accounts, it seemed like the group wasn't looking to release music anytime soon, and then, boom -- last week we see this brand new EP of works titled Clever Raven, followed by dates for a Midwest tour. You can download the album for a “name your price” tag on Bandcamp.

While we're talking about surprise works from Feburary, let's look at a few that slipped in under the radar, and we'll start with the latest from Gysklar, the one-man project from Bountiful musician Riley Parsons. There's not a lot to really say about Parsons, as he's just starting to make his way into the music scene; most of his work is found online via his Bandcamp page, which, until last month, was mostly singles. A couple of weeks ago, he dropped his debut full-length album Sympathetic Vibrations, a collection of ambient jazz/rock/jam music with a hint of synth. It's a pretty good collection, but I'd like to see if it could be replicated live before fully giving him props for the work. You can download the full thing from Bandcamp for just $5.

Moving to rock, this past Tuesday we saw the release of the latest album from American Hollow. Ever since their debut full-length album Whisper Campaign came out in the spring of 2010, the group have been going nearly nonstop around the state playing gigs whenever they can and making an impact with the crowds at Liquid Joe's and the now-departed Club Vegas. Now the progressive rockers (seen above, photo by Ethan Killian) have returned with their follow-up EP, Screaming Into The Void. This EP was written almost immediately after the first album was released, and recorded and produced over most of 2011 at The Annex in Draper. It's a good progression from the group following their debut, and though the radio-rock feel may not appeal to everyone, it's worth checking out at least once. You can buy the EP off the group's Bandcamp page or from iTunes.

Next up is a little hip-hop EP from SLC artist Tage. I wish I could tell you more about this guy but there isn't much out there. Tage is currently signed to Utah-based label Illmatic Music, but that's kinda where it ends, as the man himself is nowhere to be found on social networks or any official pages -- not even a Reverb Nation page. Our previous e-mails to Illmatic haven't even been returned yet, so until we hear more, Tage is a bit of an enigma. What isn't is the four-track EP Love This... This hip-hop album has elements of R&B and soul, but it almost feels like a neo-pop/rap album from the decade gone by. It's at least worth checking out for musicianship alone. You can download the whole EP for free off the label's Bandcamp page.

Sticking with hip-hop, we check out the latest release from Burnell Washburn. 2012 is looking to be the year of Washburn, as he has a few releases planned over the year, but for now we'll focus on his latest release of instrumental music. Mt. Olympustrumentals is comprised simply of beats and background music for, as Burnell himself stated on Facebook, “your listening or rhyming pleasure.” While not directly stated, it is hinted that the album is green-lit for anyone to sample as a way to get their creative juices flowing. The album was released via Washburn's Wasatch Renaissance company, but finding the album has been sketchy as of late. Be on the lookout for this when the download becomes official!

Next up is the debut full-length release from SLC rock project The Squatches. The band is mostly a solo project from musician Dave Dangerfield under the persona of “Dick,” with backing vocals from a woman only mentioned as K. Dangerfield. The band released the single “Apologetics” back in January with a two-track EP in February titled Valentine's 2012. But a couple of weeks ago, the project's debut album, Ashby, was released online and so far there hasn't been much promotion for the album or reaction from listeners. It's simply just been put out there without any more effort to get the word out. For what it's worth, it's pretty damned good for a solo project; not trying to overpower or underwhelm the listener with too much or too little of something, as many projects tend to focus on the strengths and hide as many weaknesses as they can. This is a well-rounded album with a little something for everyone. You can download the full album for $10 off their Bandcamp page, as well as purchase a physical copy for $12 there or from Create Space. 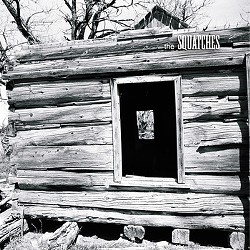 While we're on the topic of solo-projects, a few weeks ago we also saw the debut EP from Built Of The Architect, the Christian acoustic project from Orem singer/songwriter Garrett Garfield, who makes no apologies and totally embraces the influence of Jesus Christ and the gospel for his music. BOTA has been gaining a lot of fans in Utah County, and has actually done really well for a musician who hasn't played a lot of venue shows, or shows in general, beyond U.C. The debut EP Hold To Hope made its way onto Bandcamp back in late February, with major praise on Facebook from diehard fans. Music-wise, it's well produced and very sweet-sounding, but a little difficult to hear what his range is in just four songs. If you're into Christian-themed music, this will be right up your alley.

And finally, we get to the one new-release show this week, as we see the debut EP from Lady Murasaki. I was prepped to write about this, but if you look at the CW Website you'll see that Austen Diamond beat me to the punch, complete with a photo from the show and interview I did with the band back in January. Oh well, that saves me time to tell you that the self-titled EP sounds pretty damned smooth. Recorded and produced entirely with Camden Chamberlain (The Suicycles) at Kitefishing Studios, this four-track release shows the band's range and true sound that, until now, had been distorted by standard SLC-venue practices of having to crank the monitor volume to drown out talking audiences. (Seriously, what the hell, SLC? This happens too damned much at every venue! You all have Facebook and Twitter; talk about “your day” elsewhere.) Anyway, it's a cheap buy and pretty good; you should probably pick it up. You can snag a copy at the band's release show tonight at at Bar Deluxe, as they'll be playing alongside Michael Gross & The Statuettes and The Swinging Lights. Just $6 starting at 10 p.m.