A look at Caputo's tasting class

Meat and beer -- is there a finer duo?--- OK, maybe wine and cheese, but Tony Caputo's Food Market & Deli also offers focused tasting classes on that subject matter, as well.

On Monday night, as part its ongoing tasting and cooking classes (see schedule here), the market teamed up with Epic Brewing to showcase artisanal salumis (a subset of salami) and craft beers. It was an informative, enjoyable evening that left students with an aptitude to fear no future salumi case.

With her wry humor and unparalleled culinary knowledge (which, thankfully, lacks the pretentiousness often associated with foodaphiles) Vanessa Chang, Caputo's education director, along with Michael Malachowski, Epic's national sales director, led us through 11 meats and four beers during the evening. Each brew was paired with about three meats.

First up: Creminelli Casalingo (pictured above). But, wait, you're not allowed to scarf it as soon as it's passed out. "We're going to learn how to savor. We're going to learn how to taste," Chang said. That's one of the beauties of Caputo's classes: the slowing down and talking about certain flavor profiles to help train student's palates. As a side note: Matt Caputo has said that tastings with the Chocolate Society (read more here) have excelled his tasting skills more than anything else he's ever done. It works! Chang then said that as students began to describe flavors, they were not allowed to use two words: good and bad.

Without getting into the minutia of the class in this blog (you'll have to go to a class yourself), Chang chomped into informative tangents like the history of salumi, what casing is all about and the importance of mold.

Creminelli, a local company owned and operated by Cristiano Creminelli, and OLLI were featured. There are handmade, no-additive, no-nitrate, meaty delights.

The Casalingo is a coarse-grind small-sized salumi that has a mild funk smell (like on a cheese rind) and has light salt-and-sweet flavor profile. This, along with the more fatty Supresa (wine aromatics, garlic and salt with a tangy brighness) and the Wild Boar (my favorite of the night) were paired with the Hopulant IPA because the hops cut through the fat and they help cleanse the palate.

Temperature matters. These meats were left out at room temperature for an half hour. When served properly, the meats' flavor profile is accentuated. As such, the Creminelli Trartufo's truffles came out in full effect -- funk or, as Tyler Florence would say, the taste of sexy socks (which is way better than it sounds). Cross Fever Amber was paired because its sweetness works nicely with truffles, but that brew also went well with the next two meats -- Creminelli Capicola and OLLI Lomo (sweet and spicy; pictured above) -- which marked a transition from fermented, cured meats to whole cuts that have been cooked.


The next transition came with the variety of pig. OLLI, a Virginia-based company, uses Berkshire pork -- across the country, they are chefs' darlings right now -- as opposed to Creminelli's Duroc pigs. The OLLI Prosciutto was phenomenal, probably the best American-made prosciutto out there. At this point, the sour, tart Apple Saison was passed out, which was supposed to be paired with the Lomo, but things got wacky for a sec. I drank it with the Prosciutto (which was supposed to be paired with the Impreial Red), but it wasn't so bad, actually. OLLI Speck was a super-fatty cut, and that was too much for me. This was the only instance when the beer was best paired with more beer - -mmmm, more Imperial Red. But the Pancetta, which came next, was creamy and just melted in my mouth -- the opposite happened: Who cares what it went with, this meat is better than candy. 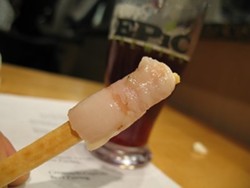 OLLI Lardo (pictured; yes, that's basically all fat) was paired with the Barley Wine Ale. And the evening ended on the only meat that you have to pay to sample at Caputo’s. The Paleta is the “cheaper” cut of the Pata Negra; it comes in at $80 a pound, rather than about $175. This pig eats well: You can taste the diet of roasted acorns and hazelnuts. I don't want to mess with the perfect taste by drinking a beer with it. This is the pinnacle of pig. And a fine way to end an educational evening.