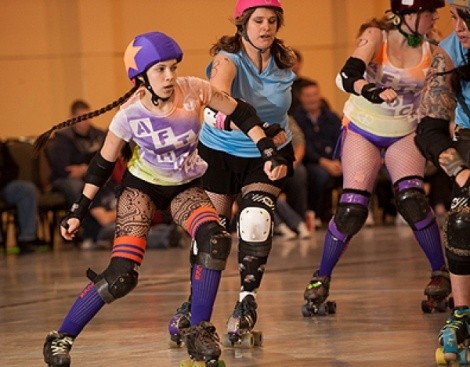 Saturday, March 17: The Junction City Roller Dolls’ 2012 season kicked off on St. Patrick’s Day, and there are just way too many good luck/bad luck jokes to drop. ---

The Aftershocks, JCRD’s newest home team, couldn’t catch a break Saturday night against the Hilltop Aces, the league’s 2011 champions who obviously haven’t lost any momentum during the winter off. From the first whistle at Layton’s Davis Conference Center, the Aces made it clear they weren’t just out to win, but to crush. Malibu Harpy and, to a lesser extent, new Ace, Pickle, took multiple scoring leads as the Aftershocks’ uneven defense flailed against the onslaught. The Aftershocks’ Wreck N’ Glamour and Josie Cansockaho are talented jammers, but they’d made little scoring progress by the chaotic end of the bout’s first half. Score at halftime: Hilltop Aces 50, Aftershocks 12.

The Malibu Harpy/Pickle attack continued into the second half, the Aftershocks falling further and further behind until they were 100 points down—pretty much the point of no return, unless you’re in basketball or The Walking Dead. A late-period scoring rally by the Aftershocks’ Canadian Bacon lifted the finally tally out of the Truly Embarrassing zone, at least. Final score: Hilltop Aces 139, Aftershocks 45.