While the music scene in SLC has continued to grow in size, the number of venues hasn't due to lack of liquor licenses, proper spaces and motivation from potential business owners. --- Now while that works to the advantage of those places currently open, knowing full well they may never have an empty night during the week, it leaves many bands out of the loop without a stage to call home for months.

Last year, sporadic shows started popping up in a small unofficial venue going by the name of Stale Street Underground -- an all-ages location, free of charge, that gives many of the upstart, unestablished and underground bands a location to hook up their gear and play to a loving crowd. Today, we chat with the small independent-location founders about the place and their thoughts on local music.

(For this interview, the members chose to be interviewed as a group.)

Gavin: Howdy, guys. First off, where did that name Stale Street Underground come from?

SSU: We named our street after the heap of stale bread our neighborhood hoarder feeds his pigeons with. So when we started putting on shows, we just carried over the name. What makes it The Underground is the local underground-music collective that makes it happen.

Gavin: How did you each become interested in the local music scene and what were some early influences on you?

SSU: We were already involved with music; we grew up in Utah, so naturally, we wanted to see what was going on locally. The trash pit caught our eye, and all the psychos that came out of that.

Gavin: You're all involved with the band The Sleepwalkers & Super 78. How did you get together to form the band?

SSU: The Sleepwalkers live at the Stale Street Underground, but SSU includes everyone involved with making the shows happen. Super 78, our sister band, is also who helped start and is involved in the planning and executing of the shows, as well as our video projectionist, Patrick Rodgers, and all of the other performing artists who are part of the show. Both bands formed the same way simply enough: we all liked each other and liked the same music. We all had the similar and different visions that caused us to form the two completely different bands.

Gavin: Being relatively new, how is it performing together and playing around the city?

Gavin: Real quick, any plans for a release this year or are you focusing more on gigs?

SSU: Both. We record whenever the juices are flowing and we don’t pressure ourselves to record. It helps the process feel more natural. We release single songs on the Internet and to friends, but for an actual CD or demo, we’ll just see. But at the shows we try to do something new every time, not just a drunken bar party; you know, we try to make it more of an event and get people involved with making something out of each event.

Gavin: How did the idea come about to start up your own localized venue?

SSU: We played around at other venues, but we wanted to make our own rules for the shows. We don’t like the idea of our friends having to pay to get in and we made a place to do that. We didn’t like the vibe of most of the bars and venues -- dealing with jerk-off sound guys with a schedule, the vibe of playing your set and getting off the stage immediately got old. Don’t get me wrong, we like some of the bars around and venues around town. And we also keep a schedule SSU, but it doesn’t have the feeling of some guy's annoying day job. It's nothing perfect but it’s a start. That’s why we started SSU; it was time we did things our own way.

Gavin: What made you choose the location you're at rather than seek out a bigger place?

SSU: Stale Street is not so confined to one place by one band. An SSU show can happen a lot of different places. The house we are at is just a house where we can be loud. It wasn’t so much about the ideal venue, but the idea of free, all-ages shows that the crowd had more to do than drive up, watch the show and leave.

Gavin: What was it like putting the place together as a venue for shows and getting the best out of the space?

SSU: We rented out the house together mainly because of the basement so we could continue having a place to record, write, play, screen print, and you know, just a workshop. But then it just turned into a place for people to come listen. I don’t know how to answer; I wouldn’t say we got the best out of the space yet, but we make it work, and its always developing. We didn’t do much to the basement, but the mix of people and the video projections create an atmosphere. The only downside is it’s a small place and so many people are coming to the events lately. Which is nice -- we want to get out to as many people as we can but, it’s a big group. 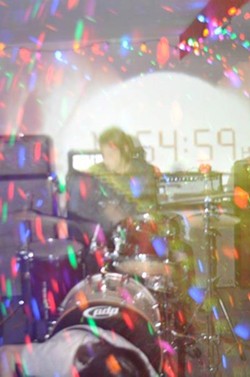 Gavin: You've also highlighted the place as a home for underground art. Why did you decide to make it into a gallery, as well?

SSU: Most everyone we know has a somewhat creative mindset, new ideas for the future. But it's no gallery here. There’s art on the walls from us and other people, but we haven’t had any exhibitions. However, it is a home for anyone to present anything, not just music or a painting, but art in any way; any kind of experiment can go into SSU and we’ll accept anyone’s ideas that are thinking -- we’d like more people to contribute their ideas for the shows. Lock a hundred people in one dark room for 10 hours, we don’t care, that’s art to us.

Gavin: Who are some of the people you've currently got on display to check out?

SSU: Come to the shows and you will find out. Some people on display you may like, some maybe not. It’s not a competition or singular scene; it’s a variety.

Gavin: One of the most important things is that it's not just all-ages, it's also a free venue. Why no cover?

SSU: Why would we try to take a couple of bucks from the people we want to experience this? We work hard, yes, we would take any support offered, but charging would just make us another venue. Besides, we already have enough on our minds to have to stress the legalities of running a “venue.”

Gavin: You've been running a few months, mostly by word-of-mouth. How has it been putting on shows at the place and getting kids out to shows?

SSU: We started out small, and we still are. At first, it was just all our friends and people we knew real well, but lately there are more new faces. Word just spreads like a weed, it seems. Some of the shows in the future we will try to make more exclusive to guests. And other shows will be open to just whoever hears the word.

Gavin: What's the goal you have in mind for Stale Street ,and what do you hope people will get out of the place?

SSU: Stale Street will go anywhere it wants to -- our plan is not to have SSU stay in SLC forever and turn into another venue; i'ts something we want to share with all of the minds around us. Next year, it may be a totally different thing; maybe it will be in Cambodia, who knows? Some people will come just for the music and art, some people come for a party. It's all up in the air what others will get out of it; let them take what they want out of it. The idea is not to pigeonhole the shows to cater to one specific group.

Gavin: Moving on to more local material, what's your take on the local music scene, both good and bad?

SSU: It's good and bad, just like any other city. I don’t know where each local band is coming from.

SSU: Yeah, more of a variety in what they put out, I suppose; not 10 bands that sound the same.

Gavin: Who are some of your favorite bands coming out of Utah today?

SSU: There’s a few, but I won't say; don’t want to leave anyone out or toot anyone’s horn, though.

Gavin: What's your opinion on the art scene in SLC and the work coming out of it?

SSU: There is some really good “art” coming out of it; I don’t really know about the “scene” of it to give an opinion. Copper Palate and Captain Captain have always blown us away.

Gavin: What do you think of the other all-ages venues around Utah and the work they're doing to get music to people under 21?

SSU: They’re a place for anyone to learn and start pushing their music out to someone, and seem to be doing what usual venues have done for a long time.

Gavin: What can we expect from all of you and Stale Street over the rest of the year?

SSU: More shows, about once a month coming out of SSU. The summer is going to bring out a lot more ideas for creative performances that we’ve been preparing to execute. The Stale Street Feed is also something to look forward to, it's just articles and free writes, art pictures, documenting what happens at the shows at SSU and more. The difference is it's not just a magazine full of bar ads. It’s not even a magazine, it’s for us, or whoever else, to look back on and because we all have a short-term memory. Also, more songs coming out on the Internet from The Sleepwalkers, Super 78 and other Stale Street bands as well.