Saturday, March 31: The Happy Valley Darlins played the third bout of their first season at the old Food 4 Less building (you know the one) in Spanish Fork; home teams Rollin’ Rebellion and Sirens of Steel facing off for the second time in two months.---

The last time the two teams played, the Sirens came out on top 131-89; on Saturday, it wasn’t immediately clear to the capacity crowd (or at least capacity for aisles 6-12 of Food 4 Less) which would rule the night. For a new league, HVDD has some serious talent in its ranks—like BrakeHer 1/9, who put the Rebellion on the scoreboard first with a series of aggressive jams. But, just when it looked like the Rebellion might be rolling toward a blowout, Sirens jammers Cookie and Pain In the Nikki dragged their team into the lead with 7-and 14-point jams, respectively. From there, the top score was traded back-and-forth until Su-Su Sudio turned in a 15-point jam that put the Sirens comfortably ahead at the half. Score at halftime: Sirens of Steel 61, Rollin’ Rebellion 40.

That lead didn’t last long, nor did Su-Su Sudio: She went down hard in the fourth turn midway through the second half and didn’t get back up, bringing the bout to a lengthy halt before EMTs rolled her out on a stretcher with a broken left leg. With one of the Sirens’ strongest jammers out of the picture, the Rebellion took full advantage when play resumed; Bloody 2 Shoes soon inched her team into the lead, then Chiquita WabamYa returned the Rebellion to their earlier dominance with a 20-point lead. Sirens Cookie and Pain In the Nikki again poured on the speed in a handful of last-ditch jams, but couldn’t catch the Rebellion before the last whistle. Final score: Rollin’ Rebellion 106, Sirens of Steel 100.

Shots from Saturday’s bout by Liquor’n Shooter (Rollin’ Rebellion in purple, Sirens of Steel in orange): 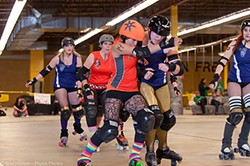