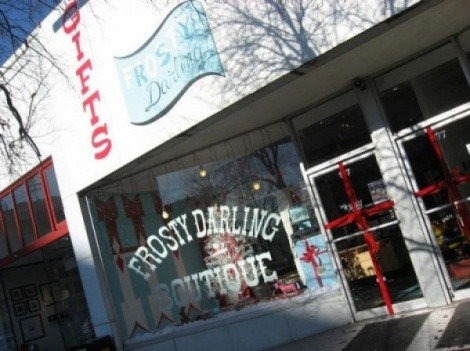 It's been a bummer day for fans of quirky local businesses, as it was announced that downtown's Frosty Darling will be closing at the end of April, while Clearfield's Read Cat Bookstore will be moving to Kanab at the end of the month.---

Gentry Blackburn's Frosty Darling (177 E. Broadway) has been operating in Salt Lake City for five years, selling candy and quirky gifts—many of which are made by local crafters and artists—and hosting cupcake socials and other events. The store, adjacent to Kayo Gallery, has been a fixture in the local artistic scene and has been featured in City Weekly several times, winning a Best of Utah award in 2008 and 2011 and having its unique items featured in CW's annual gift guide for the past two years.

The Read Cat Bookstore, a small shop in a Clearfield strip mall, has been in business for four years and boasts a selection of 25,000 used books from every genre, as well as new copies of some popular book series. What set the shopping experience here apart for me (besides the bounty of Agatha Christie novels) was the very personal approach taken by the proprietors—I only ever saw one woman behind the register, who was usually sorting through and pricing new books, as well as ringing up customers, and the shop's Facebook page was frank in addressing the various ups and downs of running a bookshop. And "quirky" applies here, too, as all the signs indicating the genres feature photoshopped cats. Here's the Adventure cat:

Late 2011 saw the permanent closure of SLCitizen, a store in Library Square that sold items exclusively made by locals—many of whom never had an Etsy.com shop. Now, with Frosty Darling closing, that's two fewer places local creators and crafters have to sell their work. Trolley Square's Hive Gallery and Sugar House's Unhinged both devote a lot of space to local artists, and there's always Craft Sabbath, but gosh, I'll miss having the adorable Frosty Darling as a part of our city.

As reader/book addict, I mourn whenever a good bookstore closes, and I feel a strange sense of guilt every time any good local shop closes down. When I visit a nice local business and am the only customer, I feel a compulsion to buy everything in the shop, even though I usually can't afford to. It's frustrating to see someone execute their dreams and visions to the best they can and not find permanent success.