Nobody Makes Fun of Quidditch ... Nobody | Buzz Blog

Nobody Makes Fun of Quidditch ... Nobody

Quidditch is still pretty cool, right? Or has the Harry Potter-inspired sport involving broomsticks wedged in your crotch always been lame? This might be a dumb question, but let me remind you that we live in an age where what’s considered cool is always subjective.--- Shit, people wear TOMS shoes with no socks, and for some reason in SLC, this haircut attracts the other sex. I don't even know anymore. That being said, I decided I had to meet some Quidditch players. So last Saturday afternoon, I hung out with the Crimson Fliers at Reservoir Park to see if I’ve completely lost my shit.

When I arrived I had one pressing question. “Be honest, are you just doing this to meet chicks?” I asked Matt Williams, a University of Utah Junior majoring in Communications. “Well, originally I joined the team because a friend told me about it and I thought it would be cool. But I did meet a girl on the team. There’s a term in Quidditch called “Quidcest,” which is when you date someone from your own team. It’s a pretty common thing.”


Now, I know what you’re thinking, but Quidditch isn’t just about scoring with humans. Quidditch is a sport, damn it, a sport centered around flying around on broomsticks, Snitches and tossing balls through hoops. I guess you could say it’s a mixture of basketball, dodgeball and lacrosse. Shit, I’m not going to explain how to play Quidditch; just watch the clip:


It would be a lot more interesting if the Snitch were a stray dog or squirrel.


As previously mentioned, this particular team is called the Crimson Fliers, a University of Utah student group (receiving no funding from the school) that consists of about 14 students from both UofU and BYU. Surprisingly enough, they’re ranked seventh out of about 200 Quidditch squads in the country, according to the International Quidditch Association.

This organization is the official governing body of Quidditch, and coming up in July, it’ll be hosting its first convention in Chicago, appropriately dubbed QuidCon. Unfortunately, the convention is strictly business and there won’t be any sweet cosplay costumes.

“It’s gonna have some workshops, referee training, how to recruit players, stuff like that,” explained Jen Jewell, a Crimson Flier and BYU student who hopes to someday work for the IQA. “I noticed you didn’t mention any Harry Potter training,” I said. “Is Quidditch trying to distance itself from the books/movies?”


“Quidditch is very separate from the books,” she pointed out. “It’s its own entity. People don’t play it because of the books.” This was shocking to hear. "Okay, so how did you get into Quidditch?” Jen thought about this for a second and rolled her eyes. “Well, the books … listen, no one plays because they think they can fly. Yes, we have some players who write fan fiction and are huge Harry Potter nerds, myself included, but most of us just like the sport of it. Some people get way into the Harry Potter aspect of Quidditch and it’s situations like that that give the sport a bad rap. It makes people think we’re all nerds.”

Coincidentally, and I shit you not, while we were talking, a guy in a black Honda Fit drove by and shouted “Neeeeeeerrrrds!”

I looked over at Jen. “Uh, does that bother you?” “I’m used to it," she said. But yeah, it’s frustrating. I think if people just gave it a shot they would see that it’s a lot of fun.” I took her advice and observed the Fliers practice for about 45 minutes. As they ran some drills and played a short scrimmage, I thought about how Quidditch isn’t any stupider than all the other fictional games I’ve ever wanted to play -- meaning, if someone said, “Hey, Colin, wanna join me after work for a little Rollerball action?“ I would probably nod in the affirmative. I don’t know, maybe people hate Quidditch because of our ingrained contempt for the British, or maybe it’s the brooms. Either way, it’s not that bad. 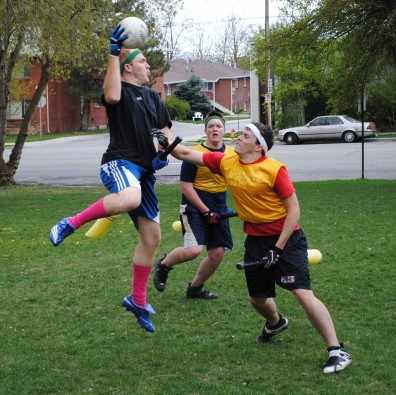 Don't have a broom? Just use a stick.


When practice was done, I approached Jen with one last question. "Do you think people would be more accepting of Quidditch if you didn't have to ride brooms? Why not just get rid of the brooms?" Jen shook her head defiantly, “Nope. Not gonna happen. The brooms are what make it Quidditch. Without the brooms, we’re just running around throwing balls through hoops.” At that moment the asshole in the Honda Fit returned and shouted, “Fuuuuck yeeeeeeaaaaahhhh!” Like I said before, it’s all subjective.

Wolf is also the author of City Weekly's daily blog, Glad You Asked.