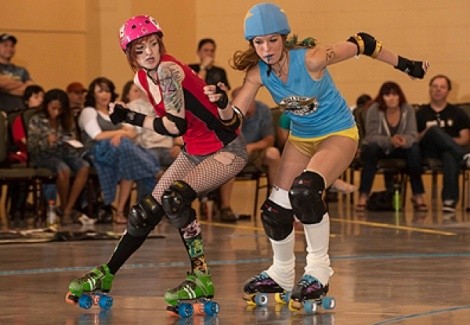 Saturday, April 21: The Junction City Roller Dolls’ 2011 champs Hilltop Aces continued their undefeated streak in the league’s second bout of the season, this time against the Railway Banditas—the team they took the JCRD tiara from last year. ---

Even more so than in Junction City’s 2012 premiere bout last month, Saturday night at Layton’s Davis Conference Center was the Pickle Show for the Hilltop Aces, who played their newest jammer Pickle almost exclusively over both periods. Between her and Malibu Harpy, the Aces’ points went barely answered by the Banditas, who couldn’t find a groove—offensively or defensively—until the midpoint of the period. Railway Banditas jammer Smashleigh (whose #32 may refer to how much she weighs in skates and gear) slid through the Hilltop Aces’ Wall of Blue a handful of times, followed by Donkey Key Punch, Tic Tac Flo and team captain Killa Patra, whose 19-point late-period jam finally put her team in the game. Score at halftime: Hilltop Aces 65, Railway Banditas 46.

Smashleigh ripped a few more chunks out of the Hilltop Aces’ lead early in the second period, and the Railway Banditas’ defense was finally tightening up—but then, the Pickle Machine kicked back into gear. Like any other team sport, it’s not all about the few scoring the points; it’s also about the defensive line keeping the other side in check, and roller derby is no exception: Aces blockers Lez Zepplin and Violence Vicksen are the toughest D duo in local derby; when they’re working in sync (which is 99.9 percent of the time), getting past them is a minor miracle. The Banditas had none of those up their sleeves, scoring few points after their earlier surge as Pickle and Malibu Harpy racked up the numbers. Final score: Hilltop Aces 118, Railway Banditas 99.