Ali3 Kitt3n scored first for the Midnight Terror, followed by a series of point-piling jams by Moon Raker and Harry Slaughter; by the time Pepper Slay finally got Pike’s Peak on the board with 3, it was looking like a potential blowout for WRD. But midway through the first period, amid a handful of chaotic jams, PPDD cranked the defense and Audi Myway turned in a 15-point run that put her all-stars on top of the Midnight Terror—albeit briefly. Visibly shaken from cockiness to panic, WRD refocused while Ali3 Kitt3n powered through her own 15-pointer to put the Terror back in the lead for the remainder of the period. Score at halftime: Wasatch Roller Derby 87, Pike’s Peak Derby Dames 50.

Early in the next period, against PPDD’s brutally tight defense, the Midnight Terror cracked 100 while Pepper Slay and Kamilla Bloodspilla struggled to score. Even more of a struggle was the sheer amount of timeouts being called—approximately 196 (give or take) in the bout’s second half; at one point, the audience wondered if they’d be out in time for Sunday brunch. Pike’s Peak lagged until Kamilla Bloodspilla fired off a series of late-period scoring jams (including a final 29-pointer), but they couldn’t quite catch up to the Midnight Terror. Final score: Wasatch Roller Derby 183, Pike’s Peak Derby Dames 148.

Shots from Saturday’s bout by O’Durgy (WRD in blue, PPDD in pink): 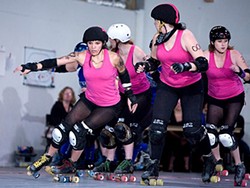