Social Distortion’s set on Friday night at the Depot was a searing, powerful showcase of the band’s timeless, rockabilly-infused flavor of rock & roll.---

Frontman Mike Ness, looking dapper in a fedora and suspenders, started off the night’s rowdy proceedings with blasting renditions of “I Was Wrong” and “Bye Bye Baby,” proving that turning 50 has done nothing but concentrate the musician’s fiery energy, charismatic stage presence and ability to command a sold-out show. With swagger to spare, Ness and company worked the audience into a rock-induced, beer-spilling, moshing frenzy with “Far Behind,” “Machine Gun Blues,” “Bakersfield” and the anthem of tattooed, leather-jacket-wearing, hell-raising fellas everywhere, “Sick Boys.”

The set was a satisfying span across Social Distortion’s discography, with songs from albums including 1990’s self-titled; 1992’s Somewhere Between Heaven & Hell; 1996’s White Light, White Heat, White Trash; newer releases like 2011’s Hard Times & Nursery Rhymes and everything in between. Ness is the only original member of Social Distortion still in the band, but the current lineup of guitarist Jonny Wickersham, bassist Brent Harding and drummer David Hidalgo Jr.(son of David Hidalgo of Los Lobos) did an excellent job capturing Social D’s classic sound, with solid performances by all. Wickersham busted out an especially tasty solo during “Nickels & Dimes.”

During the encore, Social Distortion paid homage to their blues, rockabilly and country influences with covers of Johnny Cash’s “Ring of Fire” and Carl Perkins’ “Let the Jukebox Keep on Playin’,” which included use of a stand-up bass and accordion. One song that definitely won’t be played at Saturday’s all-ages show is “Ready for Love,” a blues-soaked, unabashedly sexy tune that got everyone riled up. 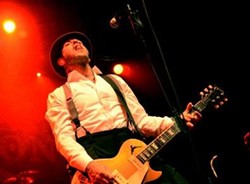 With their aggressive, no-holds-barred set, punk powerhouse Social Distortion proved they not only still rock, but their unique rockabilly- and blues-infused signature sound ain’t going away.

(All photos by Meredith Newsome.)