It might come as a surprise for you to know that one of the longest-running art collectives in SLC is relatively hidden to much of the community, including some who frequent downtown. --- In what's either a testament to the secrecy of the city or the ignorance of the community at large for not knowing, Guthrie Studios on 2nd South has remained a staple of downtown for over 35 years with some of the state's biggest talents passing through its doors. The entrance is sandwiched between what it currently Este Pizza and FICE, and the second and third floor of the Guthrie Building house nearly 20 artists creating an array of works from artists making a living off their craft.

This Friday, the collective will open its doors during Gallery Stroll for an open exhibition of all the current artist's works, on display throughout the halls on both floors, with many on hand to talk about their work and the building itself. Before that event kicks off tomorrow night, we chat with resident painter Christian Michael about his artwork and career, the work that will be seen this week, thoughts on the art scene and a few other topics.

Gavin: Hey, Christian. First thing, tell us a little bit about yourself.

Christian: Hi, my name is Christian Michael and I am new to Salt Lake City. I have been here just over a year now, and I am mostly a painter, although I make a lot of drawings and also screen prints occasionally.

Christian: I have always been into creating art as early as my memories go back. My father is an artist and jewelry designer by occupation and my stepfather is a painter also, but made his living by painting signs. I always watched as cool things were being made, as well as picking up books on art around the house and trying to learn to get better at painting and drawing realistically, as well as trying to figure out what these artists were trying to express with their imagery. Salvador Dali was probably the biggest influence on me at a young age. I also really liked a lot of the psychedelic art on my parents record collection. Comic books were also huge for me, too. Bill Sienkiewicz and Frank Miller were influences. It felt like high art inside a comic book with unconventional themes and super-distinctive drawings and airbrushing styles that you did not see in typical comics.

Gavin: Knowing that it was a part of your family's heritage, do you believe that's what made you a painter, or were you drawn to painting in a different way?

Christian: I realized early that every artist has their own symbols and obsessions. From watching my stepfather and his friends who were painters, I saw that each artist had their own personality that spilled onto the canvas. They were really into Frank Frazetta, Boris Vallejo and illustrators and all kinds of different art. I always liked the Surrealists and all kinds of cool art and illustration books lying around my stepfather's oil-painting studio.

Gavin: Focusing on your art for a moment, what's your process like when making a new piece, from the idea to the finished product?

Christian: Any piece can change at any time. Sandpaper or paint can cover or remove any part or parts of a painting. They are never finished. People pay us to take a piece away before we end up overdoing it and ruining it. Usually, I draw a lot and something will become a piece, but I have been using a lot of experimentation and watching how some of my friends do their process, and it has broke me out of a lot of old habits that I feel were holding me back. Every artist paints and approaches their work differently. Also, I have been learning a lot also from several of the old masters in our building. Their skill level is really high.

Gavin: Are you the type of artist who will mess with the work throughout or do you try to stick to your original idea?

Christian: I basically stick to the idea because I don't like sanding surfaces over and over, but I have been revisiting a few pieces with sandpaper that I thought were finished.

Gavin: What eventually brought you to Utah ,and what made you decide to stay rather than move on shortly after?

Christian: I was on vacation and thought it was an interesting and unique place even though it is a small city. I thought that by me separating myself from my environment I was too comfortable in, I could concentrate on my work more.

Gavin: Who are some of the residing artists people may be familiar with at The Guthrie, and what's it like for you as an artist to work on your own material in that kind of a creative environment?

Christian: Our studios are unquestionably painter dominated. It has been a tradition here for 36 years now. Our current roster includes some very well known artists, from local fame up to international. Randall Lake, Michael Bernard, Spencer Barton, James Baker, Deborah Brinckerhoff, Trevor J. Dopp, Matt Monson, Simone Simonian, those are my painterly people and really my favorite artists in the building and people who are pretty consistent with working on their craft and constantly producing work or doing live painting at local venues or whatever. Our lineup is really strong right now.

Gavin: Even though Guthrie, as a studio, has been around for decades, it really wasn't known as a destination spot for exhibitions or Stroll nights. What made you decide to start monthly showcases featuring other artists?

Christian: It is just more publicized now because of the amount of highly prolific, full-time artists currently working here. Actually, there have always been openings during these Gallery Strolls, but we have never officially been placed on the map. It always ebbed and flowed here. Someone would kind of step up and take responsibility and bring what they and their friends did into the light. People have always bought paintings, drawings, etc. from here. There have been some incredible artists through this building, the list is long. Skylar and Tom, who in addition to owning these studios also own Captain Captain Studios, have been really supportive in what we are trying to do here. Salt Lake City has some good and supportive people in the art community.

Gavin: What kind of a challenge was it to bring people into a building for those shows when many outside the art community didn't even know it existed?

Christian: It wasn't really challenging. Everyone just opened their doors and invited their friends and it pretty much spread by word of mouth -- cross-contamination, if you will. There has always been an audience of people coming to buy art, including important local collectors.

Gavin: This Friday, you'll have another studio exhibition, featuring the work of residing artists. Tell us a little about what will be on display and what people can expect if they've never been to The Guthrie.

Christian: This Friday will be a group exhibition and you can expect a lot of interesting and varied work as you roam the two floors of the building and see unique works in the artists studios in various stages of development, as well as finished works lining the space outside. We have shows every month from artists inside and outside our building, and each season is a group showing of works exclusively to current artists. We have been doing these shows consistently, and bringing a new show each month for over a year now.

Gavin: Moving on to local art, what are your thoughts on our art scene as a whole, both good and bad?

Christian: Who am I to criticize your art community? I think there are some super-talented and dedicated people doing their thing here. There is a certain magic to this particular art community ... that's all I really have to say about it.

Christian: That’s up to all the artists how prominent they want to be.

Gavin: What's your opinion on the galleries around SLC in general and the work they're doing to promote local art?

Christian: Around here? SLC? John Andrews. He's an artist from the Copper Palate Press collective and is really awesome and has really good presentation with what he does. He will be having a show here at Guthrie Studios next month, the third Friday, the time of month that we always have a new show. Meg Charlier has some really phenomenal work. She is having a show here in October. People are excited about them both showing here.

Gavin: What's your take on Gallery Stroll as a whole and how it's doing today?

Christian: Gallery Stroll is often criticized about the galleries left off the map because they didn't pay a fee. I think it doesn't matter if you are on this map if you are in the right location. It seems a lot of art galleries are right around here, this area, 2nd & 2nd.

Gavin: Being in Utah with all the festivals and markets we have, what are your thoughts on the way local art is shown and sold at those events?

Christian: I think its great to support local art and art in general. Hopefully, people recognize how awesome it is to have original one-of-a-kind pieces and show support and encouragement to these emerging artists in Salt Lake City. Work with your artists. They want you to have these pieces. Don't subscribe to the myth that you have to be rich to have an art collection. 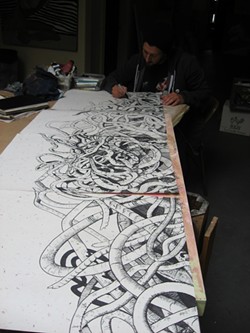 Gavin: What can we expect from both yourself and The Guthrie over the rest of the year?

Christian: You can expect some really stellar shows till the end of the year if you come to Guthrie Studios. As for me, I will be having a show at Blonde Grizzly soon. I just recently joined the Oyster Pirates collective, a San Francisco Bay art collective that includes local Salt Lake City artists Sri Whipple and Steve Larson, and former Salt Lake City artist Jason Wheatley. We are pushing for an Oyster Pirates show at the end of the year, and, hopefully, that will happen.