It’s common knowledge that people love to rip on the post-grunge band Nickelback. For the past few years, the Canadian quartet has become a nonstop punch line for music critics, bloggers and web-trolls.--- Remember last year, when Detroit Lions fans petitioned to have the band not play at the Thanksgiving day halftime show? Or how about last week, when writer Josh Gross of the Boise Weekly penned a hilarious/awful write-up suggesting that instead of buying a ticket you should buy a bunch of hammers, hang them from your ceiling and bang the demons out of your dome? Oh yeah, and if you haven’t done this yet, look up lead singer Chad Kroeger on Urban Dictionary, where you'll be pleasantly surprised to find out that his name is actually a type of self-fellatio.

Legend has it, Chad Kroeger's hair is made of ramen.


But, despite all the hatin', no one can deny that Nickelback is insanely successful and somehow, miraculously, they have a huge fanbase. The band started back in 1995 and, according to Last.fm, since their inception they’ve been nominated for six Grammys (hit this button), sold nearly 30 million records worldwide (hit it again) and they’re ranked as the second-highest-grossing foreign act in the U.S. behind the Beatles (just mash your face against the mouse).

Now don't get me wrong, I’m a big fan of most rock (including crap rock and wuss rock) but honestly, I'd rather watch someone do this for an hour than go to one of their shows. I guess I figured that other people felt this way, too; that's why my mind was truly blown when I found out that Nickelback has over 13 million fans on Facebook and I don't know a single one of them, not a soul. So, when I heard they were performing at Energy Solutions Arena as part of their Here and Now Tour, I figured this would be the perfect opportunity to find out: A) Why people hate Nickelback more than kidney stones, B) Who the hell are these fans? and C) Does anyone like Creed anymore?


So, how long have you guys been Nickelback fans?

Austin: Not that long. The first time I heard ‘em was that song they had in the Transformers movie, "Burn it To The Ground.”

Doesn’t it piss you off that Chad Kroeger starred in Dawson’s Creek?

Kali: I didn’t know that!

You guys didn’t know he was in Dawson’s Creek? This is him, check it out.

Why do think people are always ripping on Nickelback? I mean, they’re not as shitty as Marcy Playground.

Kali: Yeah, I don’t know! I posted on Twitter that I was going to this show and everyone was like, “Eww, that’s so lame”

Austin: I guess people just gotta hate on something.

OK, true or false: Scott Stapp from Creed and Chad Kroeger are the same guy?

Are you sure, check out these two photos side by side.

Austin: Yeah, they do look alike, the hair. Facial features are pretty close, too.


How long have you guys been Nickelback fans?

What songs are you looking forward to tonight?

Chelsey: I love all of their songs. We like them all, we can’t get enough of Nickelback!

Why is that? What is it about Nickelback?

Chelsey: Okay, don’t take this offensive, but I think he has a super-sexy voice, as long as you don’t look at his face.

Danica: Shhh, don’t say that! What if he listens?!

Chelsey: OK, he has a sexy man voice. But he’s a butter face.

OK. What genre of music is Nickelback?

Chelsey: Wait, I didn’t even hear what you just said. It sounded like Spanish.

What kind of music is Nickelback?

Chelsea: Oh, that one, the right, is Nickelback … that one is Creed.

Oh, shit. How did that get in there? Sorry. OK, last one -- which one is Chad Kroeger and which one is a banana? 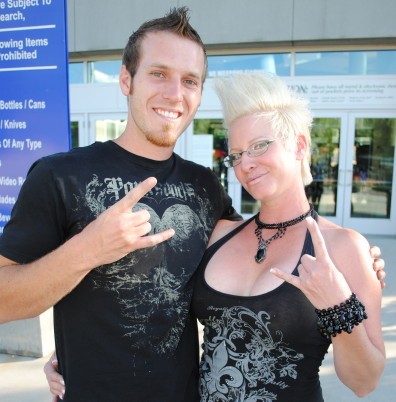 
How long have you two been Nickelback fans?

Justin: Oh, a long time. Since the beginning.

Dee Dee: Check out my tattoo!

Oh, Damn, so you guys are huge fans. Tell me, why are people always hating on Nickelback?

Dee Dee: Because they’re delicious. I guess because they're Canadian and they're super.

Justin: Probably because they have their hands in every genre.

I’m just gonna throw this out there, but... how hot is Chad Kroeger? One to ten.

What kind of music is Nickelback?

Dee Dee: Ah, they are in a class all their own. Are you kidding me?! I’ve been a huge Ratt and Motley Crue fan but I’ll tell you, Nickelback stands alone.

Justin: I’d have to agree.

Dee Dee: They don’t give a shit what’s going on out there!

Sooo, you’re saying Nickelback is the best thing to come out of Canada?

Dee Dee: Yes … except for Celine Dion. I’m not kidding.

What about Canadian bacon?

Oh, crap, I just hit your boob with my mic. I’m really sorry.

Dee Dee: You break, you buy it, motherfucker! Hahaha!

Dee Dee: Oh, hell no. They’re older than you, honey.

OK, this is a visual question. No peeking … Who looks better with a perm?

Dee Dee: Chad! But it’s not a perm it’s naturally curly … that picture used to be my screen saver.

Really? Not the dog? Look at those those floppy ears.

Dee Dee: Nope. Chad is too hot. He is walking sex.