Velour's Battle Of The Bands: Summer 2012

Hey, boys and girls, did you know there's this little ol' competition down in Provo that's produced more bands and musicians to make it onto the national indie scene that anything else in Utah?--- Once every six months, dozens upon dozens of bands sign up for this musical competition in which Velour, a handful of knowledgeable judges and, most importantly, the fans choose who is the best of the best. At least once a year, I make it down to Provo to help judge and see who the Utah County fans believe is the best of the best. For this edition, I traveled down with Esther Meroño of SLUG Magazine (who was also judging), listening to interesting stories of her recent trip through the American Northwest and the most overrated city in that area. Guess which city and you'll win a thumbs up! Upon hitting Utah County, we decided we needed some food and hit up Guru's, a cafe somewhere between quaint and popular, where I picked up this lovely Caesar Chicken wrap. Ted, I found your next review!

We skipped over karaoke (yes, karaoke at the cafe), which, to my shock, was a popular event to be attended at Guru's. But then again, I am also aware of ComedySportz on the same street, so it wasn't that shocking. A small jaunt and we were at Velour. For some reason, Muse Music was closed on this evening and a brand-new theater popped up in the area (more on that another time). We met the other judges and the bands before everything officially kicked off, watching the audience pour into the all-ages venue with anticipation. I believe this needs some outstanding clarification: This isn't just “some show to go to,” like SLC audiences tend to treat shows of this type; this is an anticipated event in Provo. People don't just show up because it's a thing to appear at, they WANT to be there. They pay the bands respect between songs with an actual response, and keep their mouths shut when the music is playing -- something SLC crowds could take a lesson from.

First up were The 2:13's, a rock/blues trio from Provo comprised of Vid Nelson, Brandon Barnes and Spencer Moore. The group have been around less than a year with a handful of tracks online, but they've clearly become a Velour staple, as the crowd were familiar with their songs. Every band gets 30 minutes and you could tell they weren't going to waste theirs, cranking out songs that got the audience jumping, like “Glass Head,” showing off Nelson's quick hands and Southern-rock-influenced picking. The band kept a steady groove going and served as a fine opening act.

Keeping with the rock vibes, next up were SLC garage rockers The North Valley, another band who hasn't been around a full year yet, but one with a little more experience and an EP under their belts. The recorded material doesn't do their live show justice, and in fact, after seeing them live, I'd say their EP is rather tame compared to what they had to show Provo. The lead guitarist and bass player switched instruments between songs and kept the room guessing as to whether the next track up would be easy-going folk or down-and-dirty garage. The SLC group managed to win over a number of new fans who might not have checked them out before.

Next on the list was the four-piece Provo/Logan group Gils, made up of two women holding down two keyboards, with a guitarist on backup and a drummer providing a light beat throughout most every song. These guys had their harmonies down pat with little variation or sign of deviation; very melodic and, at times, beautiful to listen to. However, my favorite moment came when the band pulled out copies of the pseudo-vampire-romance novel Twilight and tore pages from the book over half of the song, letting chapters cascade onstage to the delight of the entire Velour audience. Many of us suffering from the heat did the wise thing and took pages to fan ourselves off.

The fourth band on the bill was Malik, a straight-up rock band with their own little twist -- three-piece suits. The Murray-based group had the audience on the first song, encouraging them to dance from the onset with high-energy songs and a commanding stage presence. Singer/guitarist Oskar Buie definitely won the award for frontman of the night, going out into the crowd and playing to the microphone with a passion that no one else could match. The band were pure energy from start to finish; drenched in sweat by the end of their half-hour, they came up and gave the audience something that you could tell some newcomers had never experienced: a rock show with excitement. 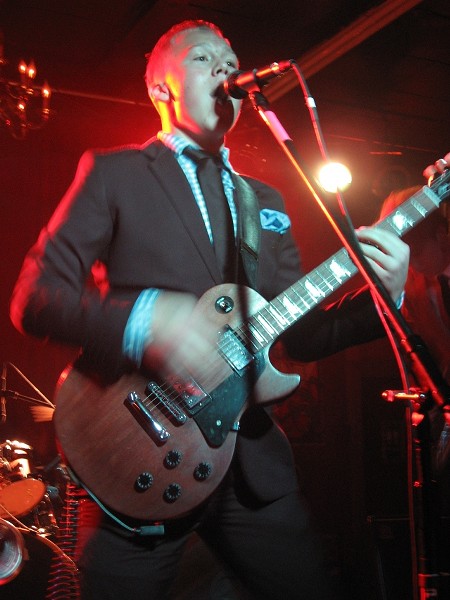 The final group to close out the show and clearly the most well-known of the five were The Arcadians. The indie-alt band from Provo, previously known as Friends & Friends, came out with a mix of loud rock and soft vocals, led by lead singer/guitarist Matt Orr with his disarming and almost modest presence. In some respects, the band are a contradiction, a frontman who invites you in accompanied by a band who echo power playing and border on hard-rock tendencies. It's an interesting mix to see live, as you think the band is headed in one direction and then they completely change course. My description doesn't really do it justice; I suggest seeing them live.

At the end of the night, the judges tally up their scores, the audience dunk their one-band vote into a ceramic Santa Claus head and the scoring begins. This year was a first for Velour -- while they've had many close calls, this is the first time they ended up with a tie! It all came down to audience voting, and at night's end The Arcadians were crowned the Summer 2012 winners, with Malik taking a close second place. The group earned the usual cash prize, free pizza, studio time and a few other perks. Overall, it was a really fun evening that a lot of music fans should not miss out on next time. You can check out over 350 photos from the evening in this gallery here. The Velour BOTB is usually held in June and December every year, and if you actually give a damn about local music and aren't just showing up to places to “keep up appearances,” you need to head down to Provo for at least one of the six showcases they put on during these competitions. You never know what each evening will bring, or whom you may see become the next big thing out of Utah.

Music Culture Velour Battle Of The Bands The North Valley Gils Malik The 2:13's The Arcadians
Prev
Next