I saw uncountable Primus tour T-shirts, a dozen or so tie-dye shirts, two bare-chested bros and one air-playing guy in a penguin costume -- and he was the one who seemed the most oriented for Tuesday’s dynamic stage and music production.---

The packed crowd -- with at least one superfan in attendance -- chanted the band’s iconic mantra “Primus sucks!” over and over again, but the chants of jubilation were only heard by two 40-foot-tall astronauts on stage. As the three-piece took the stage, those figures came to life with a projected face on each mask. In fact, the whole set was alive with a projection screen playing video clips (here's an example) and backlighting silhouetting the players so that the focus was on the music and the overall aesthetic and not the band, comprised of Les Claypool (bass), Larry LeLonde (guitar) and Jay Lane (drums).

The NorCal rock veterans thrilled the crowd with two sets, each approximately an hour long, of bass-y jamness. Overall, their sets were very much groove-oriented. Some fans said afterwards, “That was the chillest pit I’ve ever been in,” meaning that everyone was respectful, but it was also a mellow-er night than other Primus shows.

It started off strong with “Groundhog’s Day” and “To Defy the Laws of Tradition,” which bled into the first spacey jam of the night. When I interviewed Claypool (although this didn’t make the feature), he said that several songs on the band’s latest Green Naugahyde were written to allow for improvisation during the live set. While that album wasn’t broken into until the second set, where they played it in full, that same sensibility for improvisation was the evening’s theme. 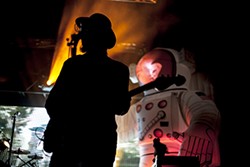 I was surprised the first set didn’t hold more heavy-hitting classics from Suck on This, Frizzle Fry or Sailing the Seas of Cheese, because those early years, even before the former, were when Lane played with and wrote for the band. However, towards the end of the first set, they played sing-along thumpers “Mr. Krinkle” (when Claypool donned his famous pig mask for the first time) and “Jerry Was a Race Car Driver,” which were, in and of themselves, worth the admission.

Even when the set went jammy, the trio showed off skill and expertise, as did the video production/film wiz, Agent Ogden (pictured below). He spliced and diced vintage black-and-white cinema clips, controlling the cut to the bounce of Claypool’s melodic bass; he also worked in some stop-motion animation and Clint Eastwood’s badassery in The Good, The Bad & The Ugly, among other stunning, sometimes witty, eye candy. And with attention to the details, Ogden played a classic Popeye cartoon during the set break.

In hindsight, I wish Primus would have performed Green Naugahyde for the first set, and the classics the second. It was noticeable that some fans felt the same way, as the venue cleared out in a minor way during the second set -- and this was not a late-night show. Claypool stated that they’ve been playing the album in full at each stop during this tour cycle, which was coming to an end after a few more stops, so this was one of the last times they’d play Green Naugahyde in full.

And, while not as enticing as some of the classics, they killed it -- each musician took his turn to add a searing solo to the structured jam sessions. It seemed like this was the set where LeLonde (pictured above) totally shined.

After the second set concluded, the crowded again yelled a “Primus sucks!” chant until the band re-emerged for a two-song encore. The last song of the night left the crowd smiling from ear to ear and enlivened the pit one last time. They ended on “Wynona’s Big Brown Beaver.”

All photos by Dom Darling.