What Do You Mean You Can't Text And Drive? LOL! | Buzz Blog

What Do You Mean You Can't Text And Drive? LOL!

When I was a teenager, my dad didn’t trust me to use the DVD player let alone operate a car. In fact, the day I got my driver’s license he said to me, “A car is like a guided missile. Remember, YOU’RE DRIVING A GUIDED MISSLE!” ---Obviously, that scared the adolescent shit out of me. I still wrecked a few cars in my day. But who hasn't? When you’re young and dumb, nothing will stop you from driving like an idiot.

Since the invention of the automobile, teenagers have always found stupid things to do while driving and thusly, at this very moment, texting and operating a car is what everyone seems to be angry about. Which is fine, because anything we can do to keep these little bastards from running me off the road is good a thing.


Except for this; this inspires me to text my way into a smelting plant.

In response to this issue, the University of Utah Traffic Lab has been asking themselves a very serious question over the past year, “How do we reach these kids? Since their budget won’t cover the construction of their own Justin Bieber, they did the next best thing and designed a driving simulator that lets people witness firsthand how awful their reaction time is while driving and texting.

I know what you’re thinking, but the University of Utah is a dry campus.


This $250,000 machine is the first driving simulator of its kind to integrate micro-simulation (complicated nerd stuff programmed into the computer) and user-generated info. Basically, every time someone straps into the computer and drives around digi-land, that info is stored. “We’re using all that data to get average reaction times in different driving conditions," said Milan Zlajkovic, a graduate student at the lab. The computer is helpful in gauging dangerous driving conditions, like texting and driving, icy roads, rain, screaming kids and plugging everything you own into the cigarette lighter. 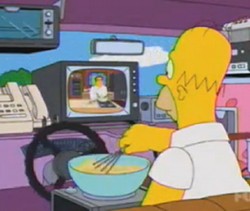 The possibilities for this simulator are endless. (Fox: screenshot)


Last Tuesday, the lab invited myself and a group of junior high and high school kids (as part of a BioInnovation Summer Camp) to stop by and test out the simulator. Now, we all know that teenagers suck at driving, but this demonstration was flat-out Carmageddon. For example, I asked a kid if he'd ever gotten into an accident. “Yeah, I rear-ended a guy once,” he said. “Do you think you’re a better driver now?” I asked. “Yeah, for sure.” A few minutes later, I watched as he sat in front of the computer and demolished every car that crossed his warpath. On the other hand, as an adult, this is what it felt like to drive the simulator.

“This was just to show them that distracted driving can be dangerous,” pointed out Zlajkovic. “Really, it could be anything besides texting. Even loud music. In fact, we played music for one group and some of them said that it was more distracting than texting, ” That’s a lot of blood on your hands, Bieber.


Studies have shown that Pure Moods actually makes you a better driver.

Zlajkovic also said that the kids who were distracted were involved in collisions "four times more than drivers who were not." On average, their reaction time was 3 seconds slower than the non-distracted drivers ... on top of just being crappy drivers.

This blog post is unofficially brought to you by the Utah Transit Authority. Buy your Trax passes today!

Inspiring people to not text and drive is great, obviously -- but I think if we want to hammer it home without spending a quarter of a million dollars (or hiring Justin Bieber), why don’t we just force kids to watch this video? We’re missing the big picture here -- texting plus everything is bad. Texting while drunk, bad. Texting in a movie, bad. Texting and walking, bad. Texting while dicing salami, bad. Texting while operating a cherry picker, bad. It's reasonable to assume that the only time it’s safe to text is when you’re pooping. I made a pie chart: 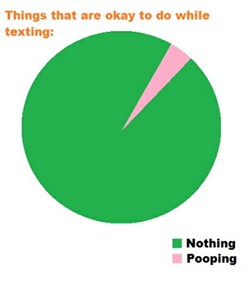 Perhaps we need to broaden the anti-texting PSA campaign a little bit. Instead of just focusing on texting while driving, I’d love to see some ads cover more specific problems: 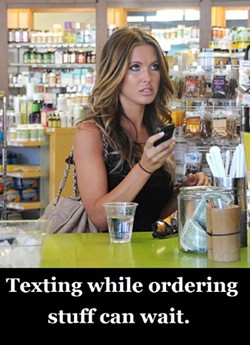 At this point, we know that phones aren’t going anywhere and, therefore, people will never stop texting. Unfortunately, the best thing to do is just deal with it. Hell, London figured this out and created a goddamned padded street, and if you haven't heard, there’s even an app that allows people to text and walk while still viewing the ground in front of them. The bottom line is this: We’re just going to have to learn to live with these assholes.