Hello to all you fireworks-lighting, fire-starting, independence-celebrating, judge-hating, politics-observing, BBQ-ing, what-the-fuck-is-this-weekend-about enthusiasts. --- As you read this today, I'll be sitting at a pre-holiday party, pretending that the rest of the world is a barren wasteland of deserts and toxic fumes and dead plant life, except for the backyard I'm in as I drink and enjoy the company of those who happened to find their way to the area ... and maybe the neighbors because they don't call the cops. Before we dive into events, here's a look at the latest addition to the 337 Memorial Wall.

First up, those crafty crafters (yes, I just wrote that; get over it) in Craft Sabbath will take over the Main Library for four hours of handmade goods and other DIY art. There really isn't a theme this month, which is kind of a shame, but that's okay. Head over and check out the art, and maybe purchase something.

While we're at the Main Library, starting this Tuesday, the Music At Main series will return to the amphitheater, affectionately referred to as The Round. The poster below only gives the July showcases, but we've got the full summer lineup for you here! July 3 – Gary Stoddard & The Usual Suspects; July 10 – Palace of Buddies & Bright Whistles; July 17 – The Animals Know & Dark Seas; July 31 – Matteo & Theta Naught; August 7 – Four Leaves Left & Yours Truly; August 14 – Burnell Washburn, Taken Root & Free Speech Syndicate; August 21 – Birthquake & The Suicycles; August 28 – Color Animal & Tolchock Trio. Go check out some of the best local music of the summer, absolutely free!

Speaking of music, Thursday marks the official return of the Twilight Concert Series. I won't write much about this, mainly because it's already been written about so much, for various reasons, on here. This year marks the 25th anniversary of the series and it looks pretty damned promising. Remember to bring your $5.

If you're not interested in the series kickoff this Thursday, perhaps a little bit of local art would be more your style. That night will also mark Andy Chase's solo showcase at Stoneground. Working the Hive Gallery, the upstairs restaurant has been making strides to showcase the finest in SLC names. You can check out all of Chase's work at the various tables and on the walls of the establishment for the next month; go check her out. 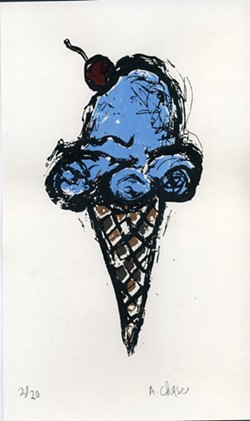 Friday down in Provo will be the next installment of the Rooftop Concert Series, and this one is going to be interesting for a few reasons. The show is Heartbreakers & American Girls: The Songs Of Tom Petty. Much like the Abbey Road show last year that featured various musicians playing Beatles tunes, this one will feature one of the most iconic names in rock, from his early works all the way to his latest album from 2010. The evening will feature members from bands like Neon Trees, Fictionist, The Moth & The Flame, The Devil Whale, Book On Tapeworm, The Lower Lights, The Blue Aces and more. Here's hoping they play “Refugee” somewhere in there.

Next Saturday, the Main Library becomes the hotspot again as the Alt Press Fest makes its return. Home to one of the largest zine collections in North America, the library will play host to dozens of independent zinesters, crafters, printmakers and various other DIY publishers for six hours of underground press -- not to mention music from bands like The Red Bennies, Night Sweats and others. It's totally free; you should go check it out.

Next up on the list, starting on July 9 is a set of free movies! Throughout most of July, the Utah Film Center will have free films to show off at the Gallivan Center. “Thrills ... Chills + Aliens!?!” will be showing off four films: Airport, The Andromeda Strain, The Poseidon Adventure and The Towering Inferno. That's really all there is to this one. Go check out some free movies on a hot Monday night.

Next Thursday, the west desert will become the place to be for 11th annual Element 11 arts festival! If you haven't been to one of these, perhaps you should take a few days off work and go check it out. While we would love to believe this is our version of Burning Man with the burning of objects, it really isn't. But it is actually pretty fucking cool that this exists in Utah and has had such an impact on the local art community. The Bonneville Seabase will be the three-day home for sculptures, light shows, artistic projects, and, of course, fire at the end. This little blurb doesn't do the event justice-- just take my advice and visit its website for details and camping info, and try to be a part of this event.

Then next Friday, we'll have a pair of events happening in downtown SLC. The first is the Damn These Heels! Film Festival, which makes its grand return in style by moving the event to the Rose Wagner -- that's right, more space and chances for people to view these LGBT-centric films from one of the longest-running festivals of its kind in the Rockies. Check out its website for ticket info and showtimes.

Meanwhile, at Bar Deluxe will be the latest Underground Gypsy Cabaret. We partially covered this a short time ago with an interview with Juana Ghani, who will be releasing their latest album at this event (more on that later). Check out some of the finest from belly dancers, hanging performers, a magic show, live music and more from this multi-performance showcase.

In two weeks, Saturday July 14 will be hopping with events. The first I can't speak much on, being as how SLUG Magazine is my dayjob (for full disclosure), but it'll be holding its Summer Of Death skate competition at Crossroads Skatepark in Ogden. You should just visit the website for more details.

If you can't make it to Ogden, there will be plenty of skating down in SLC with the Derby Extravaganza happening at the Derby Depot. Starting at 10 a.m. The Wasatch Roller Derby will be holding clinics, scrimmages, a BBQ and a screening of the film Derby Baby. If you're a derby girl or a derby love, I can't see how you would want to pass up this chance to connect with the derby community. Spectators just pay $10; the clinics cost extra, but the film is just $5 to watch.

Meanwhile, across town the Free Speech Zone will play host to the 2012 Ladyfest. The lineup is still being finalized as of this post, but the point of Ladyfest is to celebrate women in music, featuring many of Utah's finest all-female bands or solo performers. If you fit that criteria, might I suggest getting a hold of Raphael at the FSZ to perform? If tradition holds, this event will be free to attend.

And then finally that evening, The Rail Event Center will have a massive local-reunion show. Two weeks from tonight marks the return of Swim Herschel Swim and Stretch Armstrong. Two of SLC most prominent bands throughout the '80s and '90s, both called it quits over a decade ago, most prominently Armstrong, who disbanded right as ska was reaching a peak on commercial radio. But as Herschel listed on their own Facebook page last week, hell is freezing over for this reunion show. The bands will be performing with Insatiable and 2 1/2 White Guys for this all-ages show -- $12 in advance and $15 the night of. Personally speaking, I caught Armstrong for one show in 1996 and have been wanting to see this reunion for years! I strongly urge you to go check this out.

As for the blog: Over the next couple of weeks, we'll look over a T-shirt company, preview an artist at the Alt Press Fest, discuss a new lounge on the way, chat with a comic-book artist, get the lowdown on a local podcast and check out a brand-new theater company. At least, that's the plan; who the hell knows what will happen? But for today I'm not too concerned, as I'll be celebrating my brain's independence from everything else until Sunday morning. As always, we'll see what happens.