Who Wants To Buy Some Old-Timey LDS Polygamy Records? 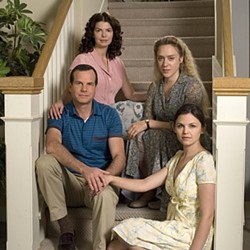 Was your great-grandpa a habitual polygamist? Do your parents refuse to tell you about your dirty old grand-dad? Well, now's your chance to find out because, lucky for you, a Utah resident is currently hawking an original card catalog from the Journal History of The Church of Jesus Christ of Latter-day Saints on eBay. The best part is, the thing is like one big diary of Mormon misbehavin'.--- 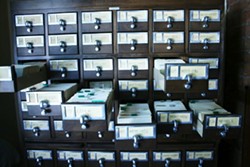 The auctioneer, sarie.jane, purchased the collection from the LDS Church a couple of years ago; she claims on her eBay post that the church didn't have enough room to store these massive catalogs anymore. Lucky for her, some idiot forgot to remove the cards before it was sold, so now there's a whole bunch of Mormon dirty laundry to be purchased. The cards are dated from 1830-1973 and, unfortunately, only contain last names and events between the letters I and O.

"Some of my favorite cards are the ones like Aurelius Miner. This guy kept getting arrested for polygamy or U.C. (Unlawful Cohabitation, which in 1885 equaled polygamy), went on trial, served time, got released and then spoke at the LDS (Tabernacle) church and then the cycle would happen again. There are quite a few instances of upstanding members of the LDS Church continually practicing polygamy, being arrested, being dis-fellowshipped and then back in the good graces of the LDS Church, only to have the cycle of polygamy start again. It must have been a hard habit to break."

"They also kept records of anytime something horrible happened to someone not of their faith. "Baptist Preacher struck by Lightening" "Scientist falls to death" etc. I would guess that these records were kept as proof of theirs being the one true religion."

The bidding price as of today (July 7) is $4,900. It's definitely not cheap, but that's the price you pay for a cabinet filled with so much awesome. I like to imagine that there's a small group of LDS leaders huddled around a computer right now, frantically trying to buy this cabinet back.