Ghosts? No, but The City & County Building Is Scary As Hell | Buzz Blog

Ghosts? No, but The City & County Building Is Scary As Hell

“Is there anyone here? I’m sorry that you’re stuck here, but I’ll listen to you,” shouted Tim Shirley of 4 Element Paranormal Investigations. --- It was 8 p.m. on a Saturday and Shirley’s team of ghost hunters were spread out throughout the City & County Building in Washington Square Park. This decade old Salt Lake City landmark is a hotbed for local paranormal investigators because of one spooky reason: It's scary as hell in there.

The City & County Building is the site of the original 1847 Mormon pioneer camp, and the building has a labyrinth of underground tunnels that used to connect to the old jail (now where the Main Library stands). Apparently, over the years, people have spotted everything from dead kids playing on the third and fourth floors, a ghost mayor who roams the halls, a shadow man, a glowing white woman who appears in windows and even some potty-mouthed ghost inmates down in the tunnels.

This photo was taken with a cell phone by City & County Building security guard Bill Conway in 2006. You can almost make out what appears to be a bearded old man wearing a white jacket. Maybe it's Colonel Sanders.


Shirley and I were set on the fourth floor, attempting to make contact with the two dead kids. He placed a toy car on the tiled floor along with a small bouncy ball. “Are there any kids on this floor? We brought some toys for you to play with, and if you’d like you can turn this light off by hitting this button,” referring to what’s called a Spirit Touch, which is a small LED light that can be turned off and on by touching a small touch pad on the face of the device, essentially allowing one to interact with a ghost.

“I know there’s two of you here,” he yells out, “Can you tell us your age?” We listened. Nothing. I look over at the Spirit Touch and the light was turned off. “Whadda faa?” I say to Tim while pointing at the box. He hastily walks over and switches it back on. “ I see you like the Spirit Touch,” he says as his voice echoes through the hall. “Can you give us a sign? Can you turn it off again?” We waited. Nothing. Next to the Spirit Touch, Shirley placed a digital recorder and an EMF reader, but nothing peculiar was coming up on either device. Less than a minute later, the light turned off again. For the rest of the night this continued, and after awhile it began to lose its luster. If there were a ghost screwing around with this thing, it was starting to get annoying.

The Spirit Touch is the little black box on the right. The device above it is an EMF reader.


Shirley has been doing this professionally for about eight months now. He recently finished a 15-year career with the military and started 4 Element with his longtime girlfriend, Lindsay Urry, back in January. They don’t make any money doing this, they just love working with ghosts. In fact, they even have their own live in-ghost. Yes, a ghost in their house … and they’re okay with it. “It started at our home in Fort Drum, New York,” claims Urry, “We were hearing kid’s laughter upstairs so one day we decided to place a digital recorder up their while we ate breakfast; sure enough, we could hear a voice. We talked to him through a Spirit Box -- basically, a radio-frequency scanner -- and he said he was 6 years old and his name was Jim. Urry says that the two of them would play with toys together, and once Jim even recited the ABCs and 123s with her. “ I was freaked out for awhile, but it became a regular thing -- talking to Jim. When we decided to move to Utah, I felt bad just leaving him, so I asked if he wanted to come with us and he said yes. When we settled into our new house, we asked Jim if he was here and through the Spirit Box we heard a child’s voice say, “I’m here.”’

Back on the fourth floor of the City & County Building, Shirley and I were still trying to communicate with the two dead kids and I started to wonder why I was there. Besides the LED light being turned off (which could have been a mechanical error), we weren’t having any luck. While we walked up and down the halls, I asked him, “So, what exactly is a ghost? Shirley pondered this for a second, “I think some might be an emotional imprint on an environment. Like, if you work somewhere for a long time and passed away, you can leave an imprint there." When Shirley said this, I instantly imagined myself as a ghost sitting at my desk in the City Weekly office, hunched over my computer for an eternity. “I’m gonna haunt the hell out that place,” I thought.

We reached the halfway point of the night and it was time for everyone to reconvene on the first floor. We met up with Urry’s team and she informed us that they may have communicated with the late Mayor R.N. Baskin, who was the mayor at the time when the City & County Building was completed. This is how she explains it: “We were on the other end of the hall and we heard someone say the name Robert through the Spirit Box. I asked if the last name was Baskin and we got a “Yes.” So, we kept walking down the hall and didn’t hear anything else until we were in front of a huge painting -- that’s when we heard the voice say, “Stop.” We looked up and we were standing in front of the painting of Mayor Baskin. 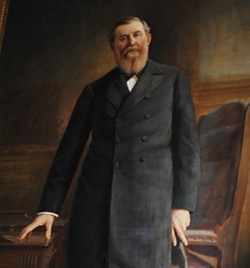 Like every politician, Baskin will do anything to stay in office.

Some of the other team members mentioned that they felt cold spots and smelled a women’s perfume. Batteries from the equipment were drained and one person claimed that her hand was touched. Nobody saw any ghosts. “It’s very rare to actually see a ghost,” pointed out Shirley, “It takes a lot of energy for them to appear, so it’s more likely to hear them or pick up their presence on things like an EMF device or a Spirit Box.”

I honestly had had enough ghostin’ for one evening, plus it was getting late, so I parted ways with the ghost hunters. Now, I’ve always been a skeptical person, and when I left the City & County Building, I was thoroughly convinced that I still don’t believe in ghosts and probably never will. Nothing has been scientifically proven on the matter and, to me, everything should be backed by science.

However, a few days after the investigation, Urry e-mailed me a soundbyte that was recorded from the fifth floor. “To me, it sounds like the voice is saying, “Can you help me?” said Urry over the phone. I know for a fact that there were zero ladies on the fifth floor that night and it certainly sounds like a woman’s voice. I have to admit, science or no science, this creeps me out.

To me, it sounds more like "eat bleu cheeeeese."