The Day My Friend Was Edited Out of a Nas Video

Being in a Nas video when the legendary NYC rapper was in his prime would certainly account for someone’s 15 minutes--nah, 16 friggin’ minutes -- of fame. Sucks for Adam Bateman that he was probably too white for “Made You Look.”---

My friend and local contemporary sculpture artist recently told me a story about his near miss at fame. And I thought this might help you get primed for Nas at the Twilight Concert Series, where there will be so many folks like that that it would be impossible to edit them out of a live video, if Nas were so inclined to shoot one.

“One day, I’m walking home from school at PRATT [Institute, a private art college in New York City], and I get to the corner of Putnum and Gates or, maybe it was Fulton -- they all meet at a triangle -- and, right as I walk past, a van pulls up and a crew is pulling cameras out the the van,” Bateman says. He gets curious, but nearly keeps walking past.

“There’s a big group of guys that are standing around all of the action -- the type of guys sitting on stoops chillin’ that I pass every day as I go to school. I say, ‘What’s up?” and one of them says, “That’s Nas.” So, of course, I stick around.”

It was the filming of Made You Look, and the focus of the video has Nas bouncing to the different boroughs in the city. When Bateman chanced upon the shoot, they were in Brooklyn, where Bateman lived. “It was right on my street, my corner,” he says.

There was a group of maybe 12 people (read: Nas’ crew, not PRATT students) standing there, he adds. As is often the case in hip-hop videos, the crowd was dancing and carrying on. No one told Bateman to leave, although he probably looked kind of like this.

“We were sticking our hands in the air and going along to the beat. I stayed there the whole time with my bookbag on. Then, they wrapped everything up and took off.”

“I thought it was crazy -- like, did that happen?” he says. Eventually, the video premiered on MTV, and Bateman was shocked. .

Check out the crowd shot at 2:01 and the few minutes that follow. “And there I’m not. I know I was there the whole time,” Bateman says.

He was snuffed out of the video, he thinks, through the magic of post-production editing.

But seriously, how freaking cool would it have been to be in a Nas video? At least, there’s some hope in it all for Bateman.

“One day, I hope to be famous enough as an artist that I’ll be in a VH1 Pop Up Video for the song. The bubble will say something like, ‘Artist Adam Bateman was here ... and edited out,’” he says with a laugh. 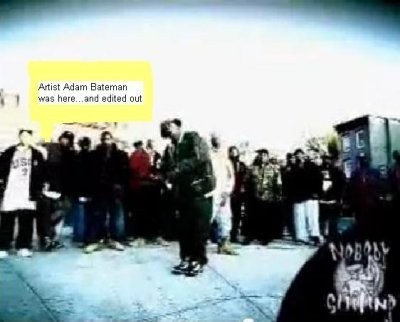