More on the Rare, Elusive "Goatman" Near Ogden | Buzz Blog

More on the Rare, Elusive "Goatman" Near Ogden

What's weirder than finding a man dressed as a goat in the middle of nowhere? Absolutely nothing. What started as an innocent hike up Ben Lomond Peak to look for some mountain goats resulted in one Ogden man stumbling across what appeared to be either a hard-working scientist or a guy who lives with goats, as a goat, in a shitty goat costume.--- The surprised hiker is Ogden resident Coty Creighton, who posted his hilarious tale of "goatman discovery" a couple of days ago on the social-sharing site Reddit. Though humorous, the original story is somewhat skimpy on details, so I messaged Creighton for a full breakdown.

"This happened Sunday morning, July 15, at precisely 10:21a.m.," Creighton said to me via e-mail, "I know this because I was texting a friend from atop the mountain, telling him he was missing out on the find of a lifetime. I was heading to Ben Lomond Peak, but this technically happened on the slopes of Willard Peak, just to the North of Ben Lomond. At first, I was just watching the goats, but there was the one odd shape that just stood out. It was bigger and a brighter white than the other goats. I tried getting a better view with my camera but I didn't have a telephoto lens with me, so I still couldn't quite make it out. I could see it wasn't walking the same, and it seemed clumsy in comparison to the other goats. I was racking my brain trying to figure out what other type of animal it could be. An albino bear? Honky Sasquatch?" 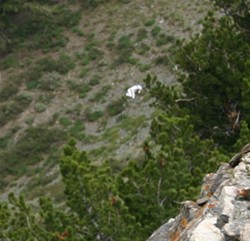 Here is the Goatman on all fours, probably doing some goat-related activity.

I assumed it had to be some sort of deformed goat. I stopped on the trail, pulled my pack off and rummaged for my binoculars. Once I pulled them out, I could make it out very clearly. It was a dude, hanging on to the side of the mountain, in a homemade goat suit!"

He didn't have binoculars or a camera, so he couldn't have seen me too well, but he just stayed there, propped up on all fours, staring right back at me. After a few minutes I was sufficiently freaked out so I grabbed my pack and hiked off around a bend behind some trees. I then pulled my camera back out to take some more photos of him. I think he knew I was still there so he got off his hands and knees and instead just sat on the hill. To me, it appeared as though he was pouting. I almost felt bad."

Strangley enough, when the Goatman is tired he sits like a human.

After a few more minutes, he went back to work, slowly crawling on hands and knees down the hill. Occasionally, he would stop, pull the mask up to reveal his face and would hold what appeared to be a mobile phone. Maybe he was snapping photos? He definitely didn't have any real photo equipment with him, and there was no pack in sight, either."

There are three ways up that mountain: an eight-mile hike from North Ogden divide, a six-mile hike from Liberty, or a three-mile hike from Inspiration Point if you drive all the way up the canyon. I was coming from Inspiration point myself, and my vehicle was the only one in the lot, so he wasn't coming from there. That means this guy either hiked six to eight miles in a goat suit, had a family member willingly drop him off at the canyon in a goat suit or he lived up there. Any of those situations was pretty disturbing to me. I really wanted to talk to the guy, but I also didn't want to be alone with him, miles from another sane person. I figured my best bet was to stay clear and let him go about his business."

I finished my hike to Ben Lomond Peak and made my way back several hours later. I kept my knife handy as I trekked through the area I first saw him, but he wasn't to be found. I stopped, pulled out the binoculars again and scanned the hillside. The entire herd of goats had vanished. I can only assume the goat man and his surrogate family had headed off back to their cave for an afternoon nap. I've thought about this encounter every day since. At the time, I was kind of freaked out -- it was obvious this wasn't a teenage prank or someone being funny, this was serious and odd; now I wish I would have stayed and watched longer. I need to know more. I need to go back to that peak and find answers."

So far, no one knows who this guy is or what he was doing dressed as a goat in the middle of nowhere, but usually the simplest explanation is often the best explanation. Dedicated naturalist? Goatman? Elaborate hoax? If anyone has any information on this guy, please let us know.