Neil Diamond in Concert: He Sang I Said | Buzz Blog

Neil Diamond in Concert: He Sang I Said

Back in my halcyon hippie-chick days, the poptastic albums of Neil Diamond did not figure prominently in my record collection. --- I knew about the consummate singer/songwriter of our time, famous for his Russian General eyebrows and sparkling V-necked shirts that mesmerized his lady listeners. Yet, despite his cheesy pop legend, I found that many friends, workmates and family members were more than a little crazy about Neil Diamond -- men and women, I might add. Gradually, I got roped into liking the man.

A shy co-worker once invited several of us over for a dinner party. Upon greeting us at the door, he directed us to a "stereo room" that featured a wall of speakers. After placing a stiff cocktail before each of us on TV trays, he dimmed the lights and played Neil Diamond albums at full blast for the next hour and a half. Neil Diamond turned out to be the ultimate icebreaker.

Another woman I know seems to experience a type of religious ecstasy when she sees Diamond perform. She's convinced he is the reincarnation of one of Christ's apostles, that he "preaches" through his music. I reminded her that he's the "Jewish Elvis" from Brooklyn but she remains convinced he's an old soul on a spiritual quest.

By the books, his soul is old: 71 years in this particular earth suit. But no one told his eyebrows -- they can still do the heavy lifting, as was evident Saturday night (July 28), when he belted out 21 of his most enduring songs at Rio Tinto Stadium. His sound machine somehow transformed a vacuous outdoor soccer stadium into a pulsating music venue. His voice was strong -- certainly no worse for the wear, "full of gravel, potholes, left turns and right turns" (as he's described it elsewhere). In black shirt and pants, he sang and strummed while every so often reaching out with his expressive hands to the crowd. With the backing of a tight 14-person band, he managed to make the audience long for and anticipate the whiskey-soaked cherries of his five decades of songwriting.

Chirpy songs like "Forever in Blue Jeans" were balanced against the nostalgic "Hello Again" and melancholy "Love on the Rocks." As the sun set on the stage and the moon rose in the sky above the stage, Diamond sang "Play Me," whose lyrics "I am the sun, you are the moon, you are the words, I am the tune, play me" sent a magical chill around the arena. 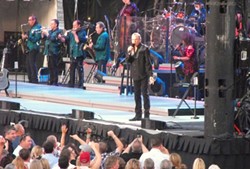 While the Monkees may have made "I'm a Believer" a pop hit in 1966, Diamond was the evil genius who wrote it. On Saturday, he performed it as a slowed-down

ballad, perhaps the version he always intended, noting he wished he'd have written the song for his new wife of two and a half months. But, he said, laughing (or was it bragging?), she wasn't even born when he wrote it. The soulful rendition was followed with a rowdier rock 'n roll version that brought the crowd to their feet for the umpteenth time.

He sang "You Don't Bring Me Flowers" as a duet with backup singer Linda Press. Afterward, he commented that nearly every woman at the concert knew what that song was about. But not the men, he said. They're busy wondering how the stage lights work. "I barely understand [the song] and I wrote the thing," he said, in a surprisingly sensitive aside.

He wrapped things up with a slew of hits from his Hot August Nights album recorded live 40 years ago. "Holly Holy," "Sweet Caroline" (with four encore choruses), and "I Am I Said" brought the concert to a close. For an encore, Diamond brought out "Cracklin' Rose," "America" and "Brother Love's Traveling Salvation Show" that included a plea to buy merchandise so that proceeds could be diverted to the survivors of the Aurora, Colo., shooting tragedy.

Diamond thanked Gov. Gary Herbert, who apparently was in the audience with his wife, for proclaiming July 28 as Neil Diamond Day. Diamond asked the governor, rhetorically, what does having a day named after you mean? Does it bestow special powers or privileges for a day? Nah, it's just some "Beautiful Noise" (yes, he performed that one right out of the gate after "Soolaimon").

Finally, I never found out if City Weekly's music editor, Austen Diamond (who's off camping this weekend), was joking when he told me to "say hi to Uncle Neil." But I can only assume if Austen were Neil's nephew, we would have all traveled to Rio Tinto in Uncle Neil's limo, instead of me parking several blocks away and traipsing across a dusty field and muddy stream to get to the stadium. Why is parking such an ordeal at this recently built stadium? 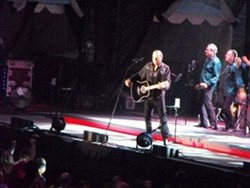 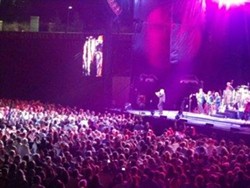