Today, I've got a mix of material that crept in under the radar, as well as a few release shows for you to check out over the weekend. --- I'll start with the latest from The Rose Phantom, the solo ambient electro-rock project from longtime Salt Lake City musician Ted Newsom. Newsom is actually a jack-of-all-trades with his work in photography and video production, not to mention his other projects Revideolized and Slip Slid In, so it should come as no surprise that his latest album, Picking Up The Pieces, is very well produced and sounds rather ethereal throughout. Of course, the album itself is only two tracks, both coming in at roughly 17 minutes a piece, so it's definitely a challenging listen. You can pick up a copy for $5 off his Bandcamp page.

Next up is the debut release from the two-man project known as DØNE. The band is made up of Cache Tolman (Iceburn, Rival Schools) and Andy Patterson (SubRosa, Top Dead Celebrity), who have combined their efforts to make a stoner-metal sound that, much in the vein of '70s punk bands, rocks a shortened set list of songs under 2:30 minutes; in some cases going less than a minute long. Those quick songs have made for some interesting shows, where in theory they could play an entire album before their set time is even up, and made for a quickly produced debut album: Done One, Done 'Em All. The duo will release the album on cassette sometime in the next month or so, but for now you can buy a digital download for a “name your price” tag on Bandcamp. This one is definitely worth a listen.

Moving on to a bit of pop/rock, this week saw the release of the debut album from Change To Fire. The Orem/Oklahoma City hybrid band formed in the spring of 2011, headed up by Blue Chandelier, playing what gigs they could in Utah County. The band had quickly formed a full set and immediately started cranking out recordings, but setbacks such as member changes and equipment failure affected their studio time. Depending on whom you ask, this album took anywhere between six months to a year to finally complete and get to market with all the final additions needed, but Build And Fall Apart is finally available. You can download a copy for a “name your price” tag off Bandcamp. 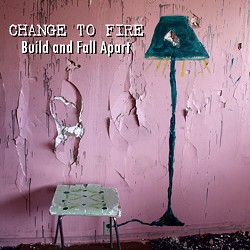 Getting a little more current, last night was the release show for the Salt Lake Spitfires. The group got together this past fall, quickly becoming favorites of Burt's Tiki Lounge and Liquid Joe's, being just an energetic punk-rock band trying to keep the crowd entertained. Last night, the band put their debut EP, Chaos Baby, out with an awesome show at Joe's. I haven't really heard any tracks of the album, but if the live shows are any indication, it's at least worth a list. Track the band down and pick up a copy!

Moving on to current shows, tonight will see the sophomore release from The Awful Truth. I actually don't need to speak much to the album Birthright, because City Weekly's Austen Diamond already didso  in his Liner Notes post this week. So, go read that, and when you're done, go to the show tonight at Urban Lounge, where you can pick up a copy and watch them play along with The Devil Whale and Sayde Price. $5, starting at 10 p.m.

If you can't make it in to SLC, perhaps Provo would be your destination tonight, as Muse Music will play host to the debut release from Velocirapture. A four-piece band put together from members of bands that broke up and collapsed around the same time, the group have only been together for roughly four months. They may not have a grand following, but they do have a good set that they were able to hammer out rather quickly into their debut release, We Live In This Machine. You can see the group perform live tonight along with Ghosts Of Glacier. $5, starting at 8 p.m.

And while speaking of Muse, let's skip a few days to talk about the release from Jordan Hix. The Illinois transplant moved to Utah County a few years ago and immediately became inspired by the rural landscape and general environment of our state to create a different kind of music than that which he had previously been tooling away on. Shrinking his projects down to being an acoustic singer/songwriter, Hix (seen above) became a recognizable name with the coffee crowds and opened for many folk shows. It's taken him two years on his own to put together his debut EP, Gentleman Of The Rail, which from what little I've been able to listen to sounds like one of the better acoustic albums you'll find this year. You can get a copy of it yourself on Aug. 7 when Hix plays Muse Music along with Crazy Old Maurice and The Lucky Crickets. Just $5, starting at 8 p.m.