The summer rages on, and much like the hot winds, August marks the time of year for zombies to take over downtown. --- The fifth annual SLC Zombie Walk will take place this Sunday, giving fans of the horror genre an opportunity to deck themselves out in their finest torn rags and cake themselves in dried “blood” to limp their way down the streets of Salt Lake City. The gruesome parade has attracted hundreds in the past, and this year organizers are hoping to break the 1,000 marker and have their biggest turnout for an anniversary some thought they might not reach. 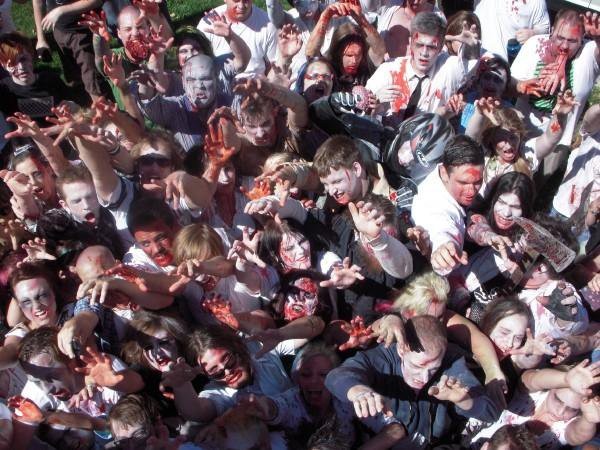 Today, I'm chatting with head organizer Liz Hansen about her experience with the walk, taking over this year, plans for the event and the route, for those of you looking to participate! (Photos courtesy of Liz Hansen.)

Gavin: Hey, Liz. fFrst thing, tell us a little bit about yourself.

Liz: My name is Liz; I live in Salt Lake City with my husband and cats. I have a full-time job, and I ride public transportation. My favorite superhero is the Flash, my favorite food is sweet-and-sour anything, my favorite sport is Roller Derby and I love zombies. 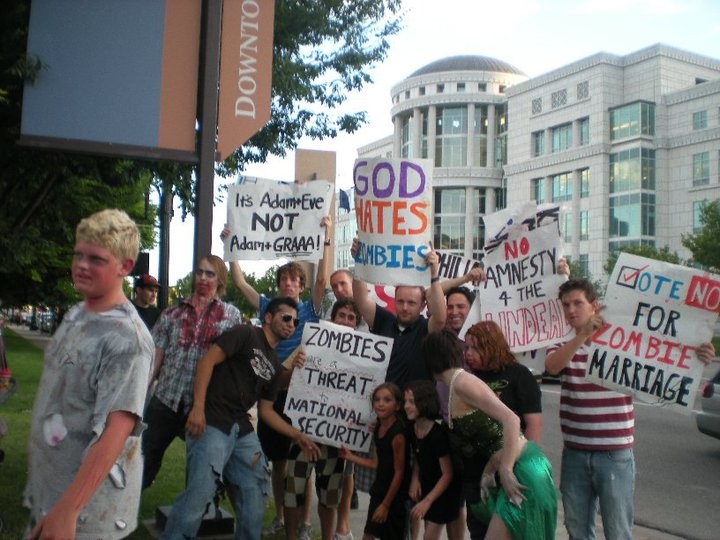 Gavin: What drew your interest toward zombies and caused you to become a fan of the genre?

Liz: I’ve always been a big fan of the horror genre in general, but to be honest, I didn’t have a particular interest in zombies until after my first SLC Zombie Walk. Since then, I’ve become a really big fan of the sort of silly, campy, old-school zombie movies.

Gavin: Tell us what a Zombie Walk is and how someone can participate.

Liz: A Zombie Walk is a semi-organized “zombie outbreak,” taking place in a metropolitan area. Since it is meant to be a surprise, the date and the route are usually not released until a matter of weeks or even days before the event. We’re like an undead flash mob. All you have to do to participate is show up in costume, stay in character, be safe and most of all, have fun!

Gavin: When did you first get involved with the SLC Zombie Walk, and what was it like for you taking part in it?

Liz: My mom somehow found out about it in 2008 and she knew it was something I would want to do. I had a blast, and I haven’t missed a year since.

Gavin: What were your first impressions of the walk and fan participation?

Liz: “Holy crap, I need more gore next year!” I was really impressed by the commitment of some of the participants. 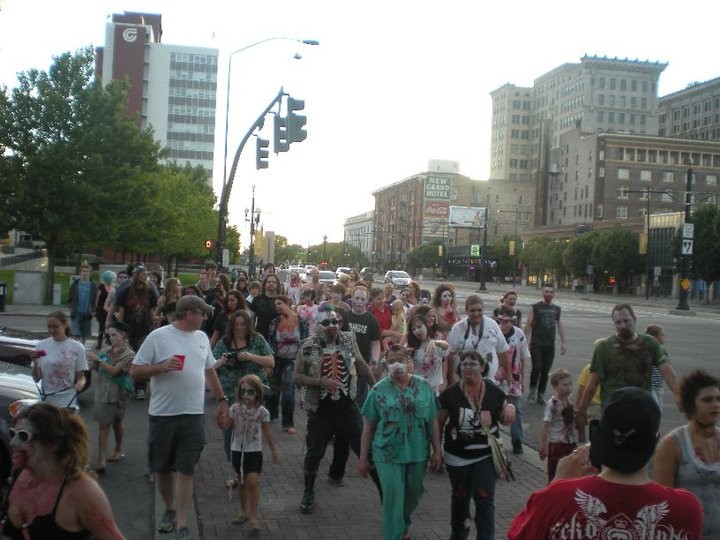 Gavin: What are some of the most creative costumes and interactions you've seen on the walk?

Liz: The first year there was a young lady with a baby doll hanging from between her legs; that one was a hoot. My favorites are always the zombie children, though, especially when they get in character. We also have an increasing number of zombie hunters armed with water or nerf guns. Last year, we saw some zombie protesters holding signs that read “God Hates Zombies,” “No Child Left Behind ... Alive” and “Don’t Trust The Living.” I hope to see more this year.

Gavin: What made you decide you wanted to take charge, and how did you become the organizer this year?

Liz: I first took charge in 2010. Sarvas, the original organizer, had moved to Chicago and it was too hard to organize from outside Salt Lake. All I really did was ask when it was going to be, and he asked me if I thought I could put it on myself. I said yes, he gave me a handful of social-media passwords and I basically threw it together in a few weeks. 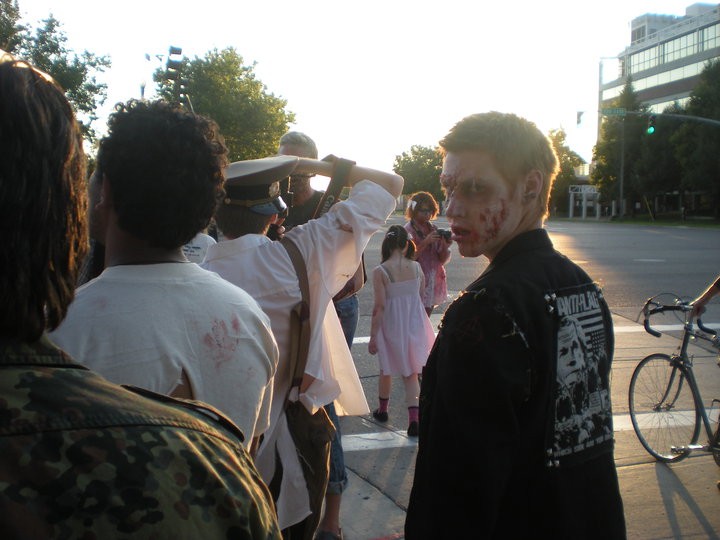 Gavin: As a former participant, what lessons have you learned from the past that you intend to correct on this year's walk?

Liz: I have learned that people will not memorize the route, so this year I plan to have someone at the head to direct foot traffic. Also, I have learned that there is no way I can keep an eye on over 800 people, so I’ve got a few wonderful volunteers to help keep us on track and remind zombies not to destroy anything.

Gavin: In the past, there hasn't been much organization with the city, seeing how you use sidewalks and are respectful to the businesses in town. Has there been any thought to taking this into the streets and running it like a major parade?

Liz: We’ve thought very briefly about it, but I think the nature of the walk would have to drastically change. If we ever get in trouble, we’ll consider it again, but we have pretty-well-behaved zombies.

Gavin: What was the plan behind this year's route and what major spots does it pass by?

Liz: I wanted to do something a little bit special and nostalgic, since it's our fifth year. We'll be treading a lot of the same ground we did year one, and passing a lot of great Salt Lake City landmarks.

Liz: All I ask is that you have your privates covered, you try not to make a mess (we had a few complaints of bloody hand prints on windows last year), and you respect personal space. But I should mention that any hunters will have to have their weapons inspected before we head out. We do also have a FAQ page on Facebook that goes over some guidelines. 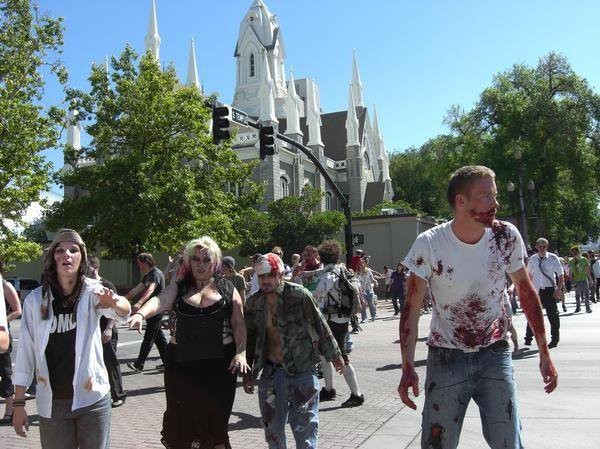 Gavin: What should spectators know and where should they set up without getting swept up in the walk?

Liz: Spectators should know that the zombies have been told to leave them alone unless they want to be turned into a zombie, in which case they only have to indicate so. The safest place to set up would probably be across the street, or in the bicycle lane in places that there is one. Photographers are encouraged and very well liked. As a side note: Climbing trees or ledges makes for a great vantage point and produces very interesting shots.

Gavin: As a final note, is there anything else people need to know about this year's walk?

Liz: As I’ve said, I do have more volunteers this year than any other year, so be prepared for that. They’ve been told only to interfere if they absolutely have to, so they will, hopefully, not be very noticeable. Other than that, just make sure you know the meeting place, and try to get there early. We rely enormously on the expected respectful behavior of all of our zombies. This event is in the hands of those that participate. As long as they cooperate and follow the guidelines, then we can continue to do this. It would be a shame to have to stop just because of the actions of a few inconsiderate people.

Liz: So many things! I’ve liked to think of myself as being good friends with the Ogden Zombie Prom -- Aug. 25 -- which is a charity event benefiting research for juvenile diabetes and is so much fun, I go every year. Then there’s the Ogden Zombie Crawl -- Oct. 20 -- the night of the running dead, which is a Zombie 5K. Anyone looking to hone their Nerf skills should look up Zombies of Zomb, and lastly, the Zombie Pub Crawl, which has already taken place this year but watch out for it next year. I’d also like to throw a shout-out to Castle Of Chaos, who not only let me work for them on one of the Friday the 13th's, but also lent some volunteers to me; and to the Ghost Busters, who are also lending a few volunteers this year.