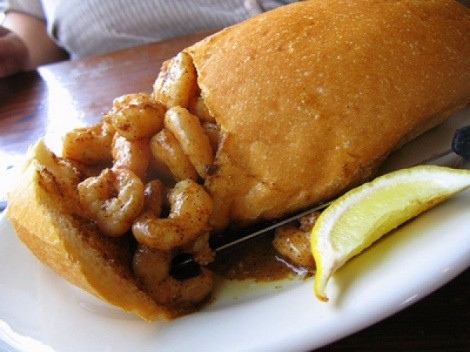 There is no shortage of incredible food to be found in New Orleans. However, Liuzza's By the Track is the one place I always return to when visiting NOLA. It's a funky little neighborhood joint near the Fair Grounds --- that serves the best shrimp po-boy I've ever tasted.

The BBQ shrimp po-boy at Liuzza's is amazing, although somewhat misleading. If by "BBQ" you tend to think of tomato-based barbecue sauce, well, this isn't that. And, the shrimp don't go anywhere near a BBQ grill. But for some reason, in New Orleans people understand that by "BBQ shrimp" you're actually talking about shrimp that is sauteed or baked in a decadent and tangy butter-based sauce.

I've searched high and low to try to find a recipe for Luizza's BBQ shrimp, without much success. There are a lot of copycat recipes, but I haven't found an "authorized" recipe anywhere. The key to Luizza's amazing BBQ shrimp po-boy is the molten-lava hot sauce that comes with the shrimp. At Liuzza's, they hollow out a French "pistolette" and stuff the shrimp and sauce into it.

I think the recipe I've created here is pretty close to Liuzza's. But, you'll have to go to New Orleans and discover the magical BBQ shrimp po-boy yourself to make that judgement. Meanwhile, enjoy this version of a NOLA BBQ shrimp po-boy.

Note: This recipe will make enough sauce for about four po-boys. The photos here show quantities for two po-boys. Figure on using about 1/3 to 1/2 lb. shrimp per person or per po-boy. Also, I've seen recipes that utilize large or jumbo shrimp. At Liuzza's, they use small shrimp, which are perfect for stuffing into the pistolette rolls they're served in.

Before you begin cooking, cut the ends off of the rolls you'll use for the po-boys. In New Orleans they use French bread pistolettes. Here, you could use your favorite hero, sub or hoagie roll. After you've cut the ends off the rolls, hollow out most of the bread using a wooden spoon or your fingers. You could also make this recipe and use hollowed-out bread bowls for serving.

Add the shrimp to the skillet and stir into the sauce. Make sure the shrimp are evened out in one layer.

Lay the lemon slices on top of the shrimp and give any extra slices or the end lemon pieces a squeeze over the shrimp.

Cook the shrimp in the oven, uncovered, for about 5 minutes, until just done.

When the shrimp are finished cooking, remove and discard the lemon slices and garlic cloves.

Spoon the shrimp and sauce into the hollowed-out bread (careful -- it's HOT!) and serve immediately.

If you have any insights or secrets about how to make Liuzza's BBQ shrimp po-boys, please share them!