I left early. Here’s why. But, hey, at least my photographer captured the highs and lows of the evening.---

With thousands of people -- what seemed like two-thirds of the 18,603 in attendance -- murmuring over Sam Beam playing solo to start the Iron & Wine set, the ambient noise drowned out what could have been a beautiful collection of songs. Your mileage may vary at Pioneer Park, depending on where you stand. Lacking the ability to hear the show from my vantage point and surrounded by folks who couldn’t give two fucks for the tunes, I might as well have left to see a funk show elsewhere. So, I did.

What follows is a brief report on my frustrations with these events. First, though, I don’t want to invalidate what Casey Jarman and his crew at the Salt Lake Arts Council do or the countless, thankless hours they spend putting this series on -- this year and for 24 years prior. Thank you all, but the beast of an event is beyond what I’m willing to venture into (there might be a rare handful of exceptions to this statement). My point is: I don’t care to deal with it any more -- as a music fan.

I want to like these evenings in the park, I really do. I even argued before the season started that it was an excellent idea to charge the new $5 entrance fee. But as a music junkie, you realize you get what you pay for -- a crowd, by and large, not gathered for music.

Since I moved to town six or so years ago, the shows have always seemed overcrowded. However, I have had a few exceptional music experiences. But when I’m wedged between a dozen people texting up front or getting told, “Fuck you” by not one, but two teenagers during the My Morning Jacket set last week -- once for inadvertently cutting in front of someone in the port-a-potty line, the next because homeboy’s girlfriend ran into me -- I’m over it. I would have rather of seen Iron & Wine behind a cage with adults drinking beer, like I did when the band played In the Venue in 2011 -- and neither was that my “ideal” situation. Thursday evenings at Pioneer Park are just not enjoyable for me anymore.

I am left wondering if there are any solutions. Yes, I go to see a band, but I see bands all the time. I would prefer to have that on top of an evening outside amongst friends, one that doesn't become hostile or, at a minimum, annoying. Is it too late to revert to hosting a free event with smaller-name bands? Is it important for the bookers to continue on this trajectory of getting bigger and bigger acts that attract more and more folks? I certainly don't think it would be a good idea to further increase admission; that just gets farther away from the ethos that the arts council began the program with. I don't have any answers, just questions.

Apparently, the 14 bands that have played during the series’ 25th anniversary season haven’t felt the same way. “[I’m] very happy with the series thus far, particularly that every band has been blown away by the audience and their overall experience at the concerts,” wrote program director Jarman in an e-mail this morning.

So, maybe I’m the only one who feels so annoyed it manifests physically, and that I’m cranky the next day; maybe some people just don’t even go, because they learn faster than me; and maybe, quite possibly, some people had the greatest night of their life last night.

I left early to check out local band The Chickens and Funk Ark -- a D.C.-based funk band signed to Thievery Corporation’s Eighteenth Street Lounge Records -- and arrived to an amazing set performed to a dismal turnout at Bar Deluxe. I was watching the seven-piece alongside members of the opening band, one friend I convinced to meet me and a few stray funk-o-files -- too bad, indeed. Last night just seemed ass-backwards, overall.

Anyway, here are some photos from the night. 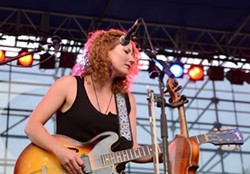 Kathleen Edwards opened with a set of sleepy songs that she said 10 people in the audience probably recognized. She also told several stories, including one of Journey's Neal Schon drinking all of her beer and groping her in the green room after her first gig in Salt Lake City.

Let me get up here and block everyone's view so I have a better place to see my Facebook feed.

I tried to close my eyes with the thought that if I couldn't see all the talking people, I wouldn't hear them. Then, I just realized I had drunk to much to cope. 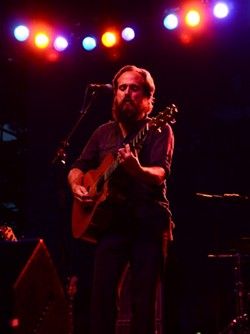 Beam asked the audience, "So, what do you want to hear?" several times during the first few songs. Whoa, that's a can of worms most artists don't open up. The set began with "Jezebel" and went into "Such Great Heights," during which Beam forgot a few lines and afterward told the audience, "Wow, you guys sang better than me."

OK, so there were some fans (not around me) who listened to the music.

Beam was later backed by a band, who emerged one by one to fill up the stage. "Naked As We Came" was accompanied by only a slide guitar. Iron & Wine also played "Mary Anne" and a few new tunes as I was on my way out the gate.

A view from far, back where I was watching the show.

Funk Ark: A more roomy concert experience -- a little too roomy, unfortunately for the talented musicians.

All photos by Meredith Newsome, except for the last one.