5 Kitchen Items Every College Kid Must Own | Buzz Blog

5 Kitchen Items Every College Kid Must Own 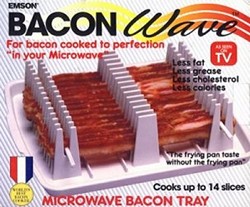 While riding TRAX up to the University of Utah the other day, a wide-eyed and overwhelmed freshman sat down next to me. This time of year they’re easy to spot -- look for the trademark lanyard around the neck with a single dorm room key attached at the end. I felt sorry for the guy -- not because he has absolutely no idea how much weirdness is about to go down in the next four years, but because he had just purchased a brand-new George Foreman grill.---

Some people swear by ‘em, but with so many decent options in the zone of college culinary crap, why the hell are people still buying George Foremans? I feel strongly about this topic because when I was in college, I made this very same mistake. Since I couldn’t cook my way through a pop-tart, my parents figured I should probably own of these little bastards. It got used once. After my first attempt at a grilled cheese, I realized that somehow this $20 pile of suck manages to punish the flavor out of anything that graces its black, soulless surface. Eventually, the Foreman became a neglected relic, slowly petrifying into a crusty shrine of mediocre meals. Actually, I should mention that all of my roommates had one, which resulted in a stack of unused Foremans in our kitchen closet.

But I guess that’s what college is all about. It’s about making dumb mistakes and repeating them over and over until eventually someone smarter than yourself tells you what to do. I didn’t want to be that guy, so I chose not to lecture the kid on why I hate Foremans. Instead, I went home and polled all of my old college cronies on their most influential college plug-in items. There really aretoo many to choose from, but for this list we attempted to stay in the same price range as Foremans and we purposely didn’t mention anything your parents want you to have, i.e. hotplates and crap. Here’s what we came up with:

Pros: The options are infinite with a mini-deep fryer. Corn dogs, fried chicken, corn dogs stuffed inside of chicken. For a while, I used mine as a microwave of sorts. Instead of nuking a couple of slices, I’d just toss a toss 'em in the deep fryer. Extra bonus: it’ll make your house smell like Applebee's. 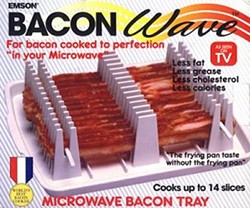 Pros: What we’re dealing with here is a customizable hot-pocket maker. Like the Fry Daddy, you can put anything in this beast. All you need is a bread-like substance and something to stuff in it, like left over spaghetti or Tostitos mild queso sauce. Try microwaving a frozen pizza for 30 seconds, fold it in half and put the whole damned thing in the Snack Master. You will not be disappointed.

Cons: With a contraption this incredible, one should be wary of overzealous stuffing. Like crafting a perfect burrito, you must leave room to close the sandwich; otherwise, you’ll have a serious overflow problem.

Pros: One of the reasons we didn’t mention plug-in frying pans was because of this beautiful specimen. The website states, “The Bacon Wave cooks bacon so well in the microwave that there's no telling it wasn't cooked in the frying pan. Only you will know.” In other words, this tray creates instant secret bacon.

Cons: I’m not gonna get all preachy on you, but access to unlimited and speed bacon will more than likely kill you. This graph demonstrates the theory nicely.

The Back To Basics Breakfast Machine $59.99

Pros: I've never owned one, but the concept is genius. From what I understand, it’s basically like a simplified version of the breakfast machine featured in Peewee’s Big Adventure only without the 50-pound anvil. It makes perfect breakfast sandwiches and, best of all, it even has a little meat warmer.

Cons: Unfortunately, the science doesn't exist where it would be possible to get the timing right. I guess the ingredients are never cooked at the same time, causing an inconsistent sandwich.

Pros: I like hot dogs but I hate the hassle of fire and scorching hot water. This is where the Hot Diggity Dogger comes into play. Don’t be fooled, this shit isn’t a toaster -- well, it is, but it’s designed for encased meats. All you do is slide a couple of meat tubes into the meat holes, cram a couple of buns into the bun holes and you’re jamming on hot dogs in no time.

Cons: Never, under any circumstance, attempt to fit fatter sausages into this thing. If you do, they’ll swell up and you’ll have to use a fork to fish them out, running the obvious risk of puncturing the sausage … and electrocution.

Next Week: What the fuck is going on with midget wrestling?