The Red Kool-Aid Stand: Many Paths to Tampa | Buzz Blog

The Red Kool-Aid Stand: Many Paths to Tampa

A legislator, a TV anchor and an ambassador all walk into an airplane. It may sound like a joke, but it was just the beginning of the parade of Utah dignitaries, notables, and political hacks boarding my flight. --- Snoring legislators on the plane didn’t seem as out of the ordinary as KSL TV’s Rich Piatt in Bermuda shorts and a straw Tyrolean hat that he had recently picked up at the Park Silly market. It really was a cool hat, though. 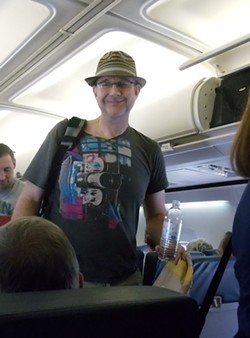 Sunday morning, the Utah crew was part of the 70,000 delegates, media, guests and protesters descending on Tampa.

Most convention-goers came by plane. One special one came by Greyhound bus. As we were loading the motor coach to go from the hotel to the welcome event, in bounds George Zinn. To many politicos, George is as ubiquitous as Forrest Gump. He shows up at every big event, and even though he’s never been an official delegate, he has been to every GOP national convention since New Orleans in 1988 for Bush/Quayle.

George always comes by Greyhound, he says—it is more economical and he gets to see the country. “I saw The Book of Mormon musical in Denver on the way,” he told me excitedly, “toured Dealey Plaza in Dallas, and found the brick with my name on it in Atlanta at the Olympic Park.” Yes, George had also made his way to the 1996 Olympics.

Born in Greece, adopted at age 2 by an Ogden family, and a protege of J.D. Williams when he attended the U, George loves politics. “I’ll swim, I’ll hike, I’ll do whatever to get to the conventions every time,” he says. “And with Mitt, this convention means more to me to be at than any of the other six I’ve been to!”

Two weeks ago, John McCain spoke at the Utah Cultural Celebration Center in West Valley City and, not to my surprise, George was there. When Gov. Gary Herbert saw him there, he shook his hand and said, “George, of course you are here!” Because of George’s near-magical ability to show up at every big event, some have nicknamed him one of the Three Nephites (a Book of Mormon reference to three men who were given the power to live forever). The governor said, “George, where are the other two Nephites tonight?” To which George good-naturedly replied, “Maybe they became Democrats.”

The welcome event was held in the huge arena of Tropicana Field, where the Tampa Bay Rays had just played baseball the previous day. We were greeted by baby alligators, pirates and live pink flamingos. The buffet tables were bounteous with free food, from lobster mac & cheese to Cuban sandwiches. But with all of the free alcohol flowing, I don’t think the teetotaling Utah delegation got their money’s worth (although Gordon and Carlene Walker’s “ginger ales” sure looked suspicious).

But what good resident of Deseret needs alcohol to party anyway? Certainly our Republican national committeeman and committeewoman didn’t. While Nashville star Rodney Atkins sang onstage and the Tampa Bay Buccaneers cheerleaders strutted their stuff, Bruce Hough and Enid Mickelsen were dancing a mean country swing. After the big welcome party, Enid, a former congresswoman, smiled at me excitedly and said, “Now I can say I’ve danced with a Hough!” Bruce, in addition to being our national committeeman, is also the proud father of Dancing With the Stars sensations Julianne and Derek Hough.

And for all of us in Tampa, the dance is just beginning!

Mike Winder is mayor of West Valley City and former candidate for Salt Lake County mayor (he came in second to Mark Crockett in the recent GOP primary race). He also made a name for himself recently writing under the infamous pen name of Richard Burwash, as a Deseret News writer, a lapse he hopes to atone for in his forthcoming reports from the RNC convention.