This past weekend was filled with events like Art Meets Fashion and the Utah Undie Run, both of which you can check out in photos galleries I snapped here on CityWeekly.net. --- But aside from covering events we partially sponsored or promoted, I also got out to check out some concerts including an all-local show at Urban Lounge this past Friday. The show included Amazing Massive Mass, Birthquake, Green Aarow (the latest project from Will Sartain and company; we'll cover them later) and Giraffula.

Today, I chat with the main man behind Giraffula, Seth Cook, about his music and more -- all with pictures of the show for you to check out in this gallery here.

Gavin: Hey, Seth. First thing, tell us a little about yourself.

Seth: Hmmm ... Well, I was born and raised here in the Salt Lake valley. I'm currently in my senior year at the University of Utah; I'm a film and media arts major. I make music as a hobby, my one-man-band name is Giraffula.

Seth: Growing up I would listen to whatever my older brother and sister where into at the time. My dad always had really good taste in music, too; he would show me stuff all the time. But as I grew up, my own musical taste began to take over, I listened to a lot of Millencolin in middle school and that's when I started going to shows regularly. When I was in high school, I used musical software and pre-recorded loops to create songs -- it was kind of a joke but I really enjoyed doing it. That kind of paved the way for my current looping project. Some of my more major influences include: Pinback, Modest Mouse, The Helio Sequence, Jack White, Why?, Menomena, 31 knots, Radiohead. The list goes on ...

Gavin: How did you come up with the project Giraffula, and where does the name come from?

Seth: I had been accruing instruments, and slowly developing skills with them over the years, but it was never anything I took seriously. I jammed with friends occasionally, but nothing really developed. All of that changed when I got a loop pedal. I began constructing songs out of my riffs and making music became a lot more fun. I started to play more, bought more equipment and all of the sudden I had a few songs. I came up with the name Giraffula sort of randomly. I was brainstorming name ideas and began picturing characters; the idea of vampire giraffe just sort of stuck.

Gavin: What was it like for you coming up with the kind of music you've been producing, and what made you decide to be a one-man band rather than put together a backup band?

Seth: I just play what sounds good to me. Sometimes, I hear a melody in my head and then I try to find the right ways to express that with my instruments. I try to just let the parts flow out naturally, and when something isn't working I usually just move past it, or let it rest a while. A lot of the songs are constantly changing; some of the first songs I wrote are just now being developed into there final state. So far, the one-man-band thing has just been sort of a convenience. I like to work on my own schedule and I enjoy the control. That being said, I would like to start introducing additional members; I would especially love to have live drums at some point.

Gavin: Do you find it easier performing alone, or does it become a hassle when performing shows and doing everything live by yourself?

Seth: I think the one-man-band thing makes for an interesting show, and it's something I really enjoy doing. I wouldn't say it's a hassle doing everything myself, but it can get a bit repetitive at times. There are definitely ways I could improve my live show -- when I play things tightly and the way I picture it in my head, I feel really good about the songs. But, because it's only me, small mistakes can slow things down. I look forward to future projects with people.

Gavin: Back in March, you released your debut album, Sounds By: Giraffula. What was it like for you putting that together, and what issues did you run into along the way?

Seth: It was an incredible experience putting the album together. It's my first time recording and I learned a lot during the process. Originally, I was just going to release an EP, but I enjoyed recording so much that I decided to just hammer out the whole thing. When the songs were recorded, I heard them with an entirely different ear, I found it difficult to consider it complete. I put in a lot of work and I'm proud of the final product.

Gavin: Most solo artists in your position tend to record their own stuff, but you chose to work with Andy Patterson and have it done professionally. What made you go that route?

Seth: In the future, I'd like to record my own songs, but I'm just not there yet. I wanted the album to be legit; I wanted to release the best possible versions of my songs. I'm fortunate enough to be friends with Andy. He's a legend in the local music scene; once he was on board, it just didn't make sense to go any other way. The man is a wizard; it was incredible to work with him.

Gavin: What did you think of the initial reaction to the album and the airplay it received when it finally came out?

Seth: It seemed to be received fairly well. I think a lot of people were pleasantly surprised. I had a good turnout at my CD release show, lots of support flowing in from the people around me. I was just happy to have evidence of all my hard work. When I first heard a Giraffula song on the radio, it was a really awesome feeling.

Gavin: Are you looking to tour anytime soon or will you just play in Utah for now?

Seth: It's a dream of mine to do some sort of touring, I feel like the I have some things to tighten up a bit. That is something I will consider more seriously next summer when I'm finished with school. I'd like to do weekend trips and play in places like Boise soon, but for now I'll be sticking around Salt Lake City.

Gavin: Moving on to statewide stuff, what are your thoughts on the local music scene, both good and bad?

Seth: The local music scene is pretty sweet right now, Salt Lake has plenty of talented musicians and incredible bands. We've started to see more local music festivals, I think that kind of stuff is great. It surprises me sometimes that there aren't more people at some of the shows. I think if people gave more local bands a chance, they'd be pleasantly surprised. I'm excited for The Shred Shed to open, a new all-ages venue downtown; lots of good things on the horizon. 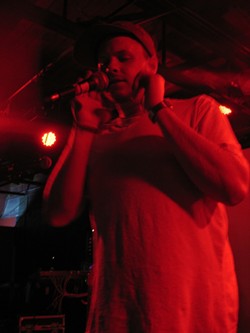 Gavin: Not including yourself, who are your favorite acts in the scene right now?

Seth: The Palace of Buddies, Shrugboat, Birthquake, The Devil Whale, Green Arrow, Gridlee, I don't know if they've been playing lately but Laserfang is awesome. I know I'm forgetting some.


Gavin: What's your opinion on the current airplay on community radio and how it affects local musicians?

Seth: KRCL is pretty awesome about playing local musicians; I don't really listen to much else on the radio. The more airtime local artists get, the more people they will reach. We can use all the help we can get in that department.

Gavin: What do you think of file sharing these days, both as a musician and a music lover?

Seth: I think file sharing is a really good thing. As a musician, it's nice to know that there is a way for my music to get to more people. That being said, artists do put a lot of work into their music so I do feel that they should be compensated appropriately. I try to buy things that I really want, and go to shows to support bands. Personally, though, I feel like music is meant to be shared -- the more people listening, the better.

Gavin: What can we expect from you over the rest of this year?

Seth: Some local DJs and producers are working on remixes of my tracks. I plan to release them as an EP called Reinterpretations Of: Giraffula. The artists currently working on tracks include Gravytron, Custom Model, Flash & Flare and Shrugboat. Additionally, I'm working on starting a new project with a friend of mine; hopefully, we'll get it rolling in the next few months.

Seth: Watch for details about future shows on my Facebook page, and you can listen and download my album for free at Bandcamp.