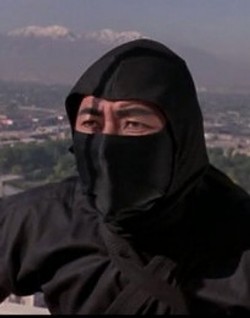 This weekend, Sept. 16, marks the 29th anniversary of one of the most underrated films ever shot in Salt Lake City: Revenge of The Ninja, 1983. It's a solid action-packed homage to the early '80s -- you know, back when Utah was overrun by one-eyed informants, disco thugs and, of course, a crap ton of ninjas.---

The film was actually part two in the strangely unpopular Ninja trilogy, starting with Enter The Ninja and wrapping up with Ninja III:The Domination. Essentially, Revenge of the Ninja is supposed to take place in southern California, but the director, Sam Firstenberg (who went on to direct such gems as Breakin' 2: Electric Buggaloo and Cyborg Cop II), made zero effort to hide the fact that he was filming in downtown SLC. In fact, in almost every scene you can see Utah license plates, and there are plenty of shots of the Wasatch Front and the Beehive State skyline. In the final ninja showdown, the scene was filmed atop of the American Towers condominiums on 44 W. Broadway.

The film wasn't in any way groundbreaking and the special effects were awesomely bad. However, it was one of the first ninja movies to incorporate supernatural powers. For example, in one of the first scenes, our hero, Sho Kusugi, is attacked by an army of foot soldiers equipped with bows and arrows. Like the badass he is, he manages to catch every arrow with his bare hands and even one in his teeth. Then he rolls up on an archer and stabs him in the jugular. Not a big deal? He did all this while wearing socks with sandals:

Miraculously, Revenge of The Ninja managed to pull in $13 million. That meager amount may seem like chump change, but hell, I'd take that any day over John Carter's negative-$84 million (also shot in Utah). If anything, this movie is a cult-classic and it makes perfect sense why people still love it -- there are ninjas, drugs dealers and, come on, what other films features chic fashion-conscious gangs cold chillin' in Liberty Park?

Revenge of The Ninja is currently streaming on Netflix.