The Hack Stamp: TROUBLE WITH THE CURVE | Buzz Blog

The Hack Stamp: TROUBLE WITH THE CURVE 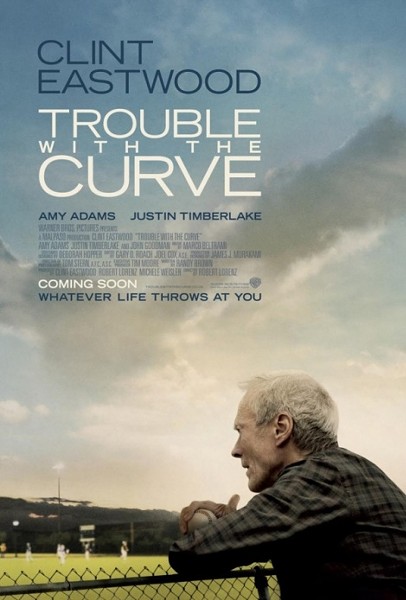 For Clint Eastwood's latest, critics couldn't wait to step up to the plate and take a big swing at every possible lazy baseball metaphor. ---

For some of this week's Hack Stampers, it was the irresistible allure of talking in terms of ineffective pitching:

“…the drama telegraphs itself like a pitcher who unconsciously tips off his curveball.” – Marshall Fine, Hollywood & Fine

“Hobbled by a plot in which every development is as obvious as a hanging breaking ball from a washed-up middle reliever.” – Marc Mohan, Oregonian

“It's a softball straight down the middle.” – Rafer Guzman, Newsday

“Trouble with the Curve pitches softballs to power hitters. It has major league players and a bush league script.” – Nell Minow, Beliefnet

“It is a baseball movie with a script full of underhand lobs, easy for actors to hit … No fun, but probably a hit despite the errors.” – Steve Persall, Tampa Bay Times

“…does nicely enough but could have used a few curveballs of its own.” – Joanna Langfield, The Movie Minute

Then there are those who prefer batting, which allows for every possible permutation on describing its success or lack thereof:

“Clint Eastwood and a superb cast hit it out of the park.” – Pete Hammond, Box Office Magazine

“Clint Eastwood plus America's pastime should have been a grand slam, but the tender yet predictable drama Trouble with the Curve is more of a stand-up double.” – Justin Craig, FoxNews.com

“If Moneyball was a stand-up triple, Curve is a ground-rule double—but predictabilities aside, it’s an enjoyable and heart-warming trip round the bases.” – Mike Scott, Times-Picayune

“The good news is that this daddy/daughter reconciliation story connects with the ball. The not-so-good: It’s a blooper.” – Carrie Rickey, Philadelphia Inquirer

There are those who try hard to appeal to old-school baseball aficionados:

“ … may not be the Game 6 of the 1975 World Series, but it's a fine afternoon or evening at the ballpark.” – Charlie McCollum, San Jose Mercury-News

And then there are those who don't even seem to understand baseball well enough to craft a metaphor that makes any sense:

“While Trouble With the Curve isn’t a grand slam of baseball movies, it’s a solid pop fly and double that gets the job done.” – Jim Judy, Screen It!

Special congratulations to this entry for stretching the baseball references into what feels like the entire review:

“… a baseball dramedy that telegraphs its pitches, an amiable, meandering character study whose big plot points hang there like the curveballs of its title. We see them coming a long time before they cross the plate. … it will have all but Eastwood’s most diehard fans staring at their watches before the seventh inning stretch.” – Roger Moore, McClatchy-Tribune News Service

Of course, there was another obvious current-events reference point for a movie involving Clint Eastwood:

“Clint Eastwood makes his infamous chair speech look like chapter one of a season of self-parody.” – R. Kurt Osenlund, Slant

“[Eastwood] doesn’t argue with an empty chair, but he does kick the crap out of a coffee table.” – Geoff Berkshire, HitFix

“If Eastwood's recent ‘trouble with the chair’ at the Republican convention doesn't keep Democrats away, Warner Bros should have a sizable fall hit.” – Pete Hammond, Box Office Magazine

But I've gotta tip my baseball cap to someone who manages to include both baseball and Republican National Convention references in one sentence: