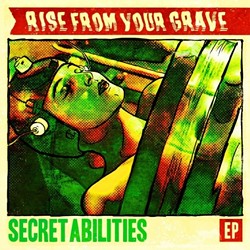 “Our music is like making yourself a nice, warm, heaping bowl of mac-n-cheese with cut-up hot dogs and pouring yourself a tall glass of lemon-lime Kool-Aid on a mildly cloudy September afternoon,” writes Secret Abilities on their bio. Front man Davin Abegg takes us deeper into the sound and talks about several tracks off of the band’s forthcoming EP.---

The local four piece ventures into sonic terrain reminiscent of mucky, simple, fun San Francisco Bay Area rock (think Fresh & Onlys), then dives head first into more bluesy and driven rock like Hanni el Khatib and finally emerges to dab a little indie-pop punk a la Smoking Popes on their palate to round out their sound.


The band formed in 2007 and has released one full-length album, and now follow it up with this EP, Rise From Your Grave.

“Four out of five songs on this EP are about dying or being dead, but none of the songs are depressing,” Abegg says. It’s a simple and easy-to-enjoy album, with no song reaching more than three minutes. The title was taken from the opening sequence of the old Sega game Altered Beast, “because it matches the theme really well and it’s a really great game.”

“Decapitated” was the first song written for the album. Secret Abilities covers Groovie Ghoulies songs all the time. This song was completely inspired by their simplicity and energy. It's a song meant to be easily remembered -- mostly because of the bouncy chorus break. It's good for dancin', too.

"I Stopped Loving You Tonight"

The lyrics to this song were directly inspired by George Jones' "He Stopped Loving Her Today" ... except with a twist. I wrote this song to be on our full-length album, Love and Monsters, which came out last year, but the music I wrote for it didn't go over well at all with the band. You can hear the original demo as a bonus song on the “Decapitated” single found on our Bandcamp. Anyway, I forgot all about the song, and a while back, I was organizing some things and found the lyrics again. Having forgotten the melody or chord progression, I re-wrote them and took the song back to the band and it ended up fitting in really well.

"Death From Above (A Love Song)"

Another song about death and, again, inspired directly from someone else's song. I really love the ‘50s crooner chord progression and melody of the Smoking Popes’ "Need You Around." I first just wanted to cover that song, but I decided I really just wanted it as my own. When this song was first written, it sounded almost exactly like the Smoking Popes’ song just with different words; it was too close to ripping it off. So, we changed a few key things and it morphed into what it is today.