Salt Lake Acting Company is kicking off its official season much the same way it left off its last season: with a bold political musical. --- After Saturday's Voyeur the local theater company held readings of Love, Loss and What I Wore as a fundraiser production to sell-out crowds, but quickly got to work on the '12-'13 season opener with the highly anticipated Bloody Bloody Andrew Jackson, which has started the company's new initiative to incorporate college actors into the experience and give them a taste of professional theater. Today, I chat with the show's director as well as two of the actors from the play before it kicks off tonight at SLAC! (All pictures courtesy of SLAC.) 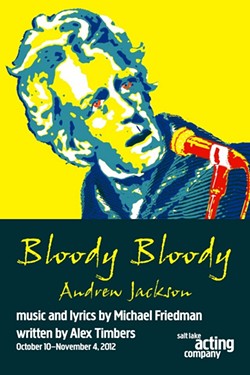 JC: My name is J.C. Ernst, and I am playing Andrew Jackson in SLAC's production of BBAJ. I am a graduate of the U of U and hold an MFA from the American Conservatory Theater in San Francisco. I currently live in New York City and have founded a theater company called The Crook. The mission of The Crook is to showcase the talents of new to the city artists.

Gavin: What are some of the projects all of you have worked on in the past year?

Chase: Started a theater company: Warboy Theatre Projects. Directed: Shackled; asst. directed Cato and How to Succeed, and acted in Crazy For You, Elephants Graveyard and others.

JC: I have done many SLC shows in the past with the University of Utah including Vince in TAPE, Joshua Bradley in Bright Ideas, and Philip in The Shape Of Things, Hale Centre Theatre Big Josh in BIG, and The Egyptian Theater Seymour in Little Shop Of Horrors. I have also worked with Salt Lake Shakespeare, Tooth & Nail, and Black Dog in the SLC area. San Francisco credits include File in The Rainmaker, Oberon in Midsummer, Eugene Marchbanks in Candida, Jamie in The Wendy Play, Fred in A Christmas Carol, Leandre in The Reluctant Doctor and Agamemnon in The Tantalus Cycle: Cassandra. New York credits include: Pink -- lead -- in a staged version of Pink Floyd's The Wall, Anthony in The House Of Yes and Matty in Plunge.

Keven: Salt Lake Acting Company just closed a sold-out run of Nora Ephron and Delia Ephron' s play Love Loss, and What I Wore. It was an amazing theatrical fundraiser event held over three weeks, with a different cast for each show and featured over 80 prominent women from the community. The energy of these women was out of this world.

Gavin: Keven, how did you first come across BBAJ, and what were your initial thoughts on the production?

Keven: Cynthia saw the Broadway production in November of 2010, loved it, and said, "SLAC has to do it!" I bought the CD and fell in love with the music. Then we started to work getting the rights to BBAJ. So, two years of planning, and finally it is opening night!

Gavin: What made you decide to bring it to SLAC and direct it, and how much work was involved bringing it to Salt Lake City?

Keven: Cynthia and I really enjoy nontraditional modern musicals and have been looking for the right one to produce. BBAJ fit the bill. It is sexy, funny and, above all, clever!

Gavin: Along with this production, this is the first year you'll be working with local universities to bring in college talent and give them a major theater experience. What inspired the program and how has it been working out so far?

Keven: Salt Lake Acting Company is delighted to join forces with local Utah universities in an effort to give young theater artists the opportunity to perform at a professional theater company in preparation for successful acting careers. SLAC will mentor, nurture and give these students the opportunity to audition, rehearse and perform in a professional atmosphere, expanding their talent to the highest standard as performers. We believe in the power of this program to enrich each university’s department, its students and the theater community as a whole.

Gavin: For the actors, how did you first find out about the musical and what were your first thoughts after reading it?

JC: I first heard SLAC was producing BBAJ from a friend in SLC. I was able to contact SLAC and they allowed me to send in an audition tape from NYC. I had not seen or read the show previously, and when I read it, I was excited, scared and confused. 1. The music and comedy are really great in this show, and high-energy, highly physical comedy is one of my favorite things to do onstage. 2. The role of Andrew Jackson is HUGE to the point that it is a bit daunting. I knew that the fast pace of the show was going to be very demanding. 3. The comedy is broken up by little bits of really honest and tragic moments. I knew it was going to be a task to figure out how to walk that fine line of comedy and still make the characters, who are larger than life, real; to make the audience care about the characters and their journey through the play, while still preserving the humor; and to give this show heart.

Gavin: What was it like for each of you auditioning and eventually getting the parts you have?

Chase: I think that the directors did a wonderful job casting me. Anyone would tell you that I belong in the roles I am in. I found out about auditions from a good friend and thought it would be a fun experience. I felt really good about the auditioning process and knew I was right for a few parts.

JC: I had never done a video audition before, but I couldn't be happier with the outcome. Playing Andrew Jackson is a once-in-a-lifetime opportunity, and I jumped at the chance to play it, even if it meant leaving NYC for a few months.

Gavin: What are your thoughts on the particular characters you're each playing, and how has it been getting into those roles?

JC: Getting to know this rocked-out version of our former president Andrew Jackson has been truly amazing. At first glance, you think that this guy is not scared of anyone and won't back down from any challenge. And that's true. He is a definite DUDE, and projects a man full of machismo and testosterone and confidence. Things get interesting when you delve into his dark side. Why is he driven to do these things, some of which are so terrible it's hard to imagine that this same man was elected president? He was fiercely devoted to his wife and the common man of America. I think it was this love and devotion that drove him. He was scared of failing, scared of not making an impact, not making a difference, not making things better. The real Jackson is mostly remembered for how he handled the American Indians, which resulted in The Trail of Tears. And this production does not shy away from this gruesome part of history. I believe he did what he thought was right for America's future. In his eyes, he didn't think anyone else was going to have the balls to do what was necessary to solve "The Indian Question," so he told the people he would, and he did. The outcome was disastrous to American Indians, but I think he didn't believe he had a better option, and you have to remember that these were different times. I often think of it along the same lines as Truman deciding to drop atomic bombs on Japan to end WWII. People at that time were saying that invading Japan was going to cost millions of casualties on both sides, so he dropped the bombs and killed hundreds of thousands of innocent people. Now, people look back at that choice and see only the destruction, horror and death that was the result, and criticize. But at the time, there was just not an easy, clear-cut, right-and-wrong choice.

Chase: Working at SLAC is a different experience than all of the directors I have worked with. It took a while to get into the feel of the production team, and LET GO. When that happened, it started to become a really nice discovery process. Each character seems pretty easy to find because they are such stereotypes. I would say that it is much more difficult to play seven characters than it would be to play one, because they do not all have identities the way that Andrew Jackson does. They are, in a way, Ambiguous Stereotypes.

Gavin: Considering that this is a musical, how much harder or easier has it been for you to put this together as a group, compared to a regular play?

Keven: It has been very fulfilling experience working with the students alongside the professional Actor's Equity members. Cynthia Fleming, choreographer and Dave Evanoff, musical director, have helped these student grow into totally professional theater artists.

Gavin: How has it been for everyone during rehearsals, interacting with each other and shaping the play?

Chase: Again, I think at first it was a little unsafe for a lot of people. But after some time, things have gotten a lot less tense and a little more free.

JC: Working with this cast has been nothing but a pleasure. They are all very talented, and it's amazing how on top of it they are even while going to school full time, and even having other jobs on top of that.

JC: My thoughts going into opening night are all centered around one thing: "Don't screw this up!"

Chase: Come see the show. Try not to pee your pants in JOY!!!

Gavin: What can we expect from each of you over the rest of the year?

JC: I'll be heading back to NYC directly after closing night. I've helped produce Macbeth with my theater company, The Crook, out there. It's a gender-bending twist on the Shakespearean classic tragedy that is full of horror and dark comedy. Demons, witches, and zombies make it the perfect Halloween treat. The Crook Theater Company is a nonprofit organization devoted to showcasing the talent of new-to-the-city artists in New York City. It's a way for some people who maybe don't have that many connections in the city to get their foot in the door and be a part of a true production, rather than just a two-minute monologue showcase. If you'd like more information about The Crook Theatre Company or you're interested in supporting them, check out our website.

Keven: Manning Up, the second play of our season, runs Nov. 7 through Dec. 9 -- a fun peek inside an average man cave where two soon-to-be-first-time dads question whether they are up to facing the challenges of fatherhood. A National New Play Rolling Network World Premiere. A Turquoise Wind, a free reading of Kurt Proctor’s play, on Monday, Oct. 29 at 7 p.m. at SLAC.