Geek-related art has become such a staple of the art community these days, there isn't a month you can't go to one of the many art events in this state and find something with a hint of Doctor Who or Star Wars gracing a canvas. --- Artists with a passion for what they grew up with and still watch today are paying loving homage to their fictional idols by bringing them to life in various forms and giving fellow fans unique art that you'd NEVER see licensed by the original owners. 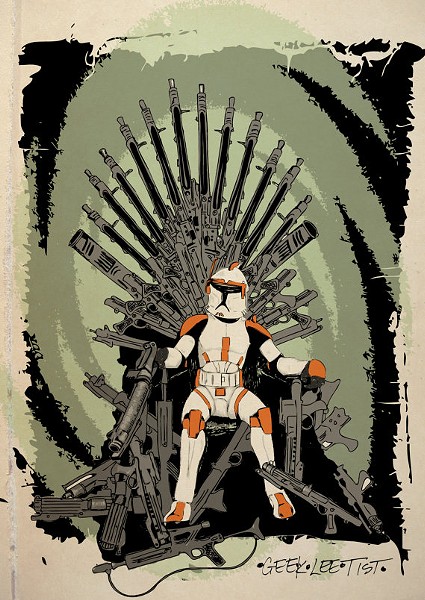 One of the more prominent artists creating these works is Dave Styer, based out of Salt Lake City, with most of his work being seen at underground spots like Copper Palate Press. His work has become so popular over the years -- and also because of  his own fascination with the genre -- that he launched his own website to highlight it and promote what he generally enjoys. Today, I chat with Styer about his art and website, along with thoughts on the rising genre and the local art scene. (All pictures courtesy of GeekLeeTist.)

Gavin: Hey, Dave. First thing, tell us a little bit about yourself.

Dave: Well, I'm a 39-year-old, bald-headed, near-blind nerd with a hankerin' for all things food and pop-culture oriented. I was born and bred here in the SLC/801, REPRESENT. Day job: designer of Y-shirts. Night job: artist/blogger aka GeekLeeTist.

Gavin: The last time I chatted with you was a few years ago with Blackhole. How have things been with the band lately?

Dave: Sadly, the band is now defunct and I'm not doing much in the way of music these days. It's not that I don't want to -- just difficult to find people willing to put up with my bullshit.

Gavin: Recently, you guys put out a limited release, which essentially is a single 46-minute track that you wanted people to share. What's the reception been like from the community about it?

Dave: You know what? I have no idea!! I hope it went over decently but ... God, like I said, other than the initial word of mouth stuff ... I didn't hear anything good or bad about it. That's good, right?

Gavin: What influenced you to start creating gee- related artwork, and how did you first get into making your own designs?

Dave: I've always been into art, etc., but initially, I started making pin-ups mashing up the lady form with various Star Wars helmets. These were just for myself, to see if I could and to make a few prints. However, these shits were received very well; ya know, like bacon-wrapped olives. I thought to myself, "Well, let's see what the world -- Internet -- thinks of them." To this date, they're still some of my best sellers.

Gavin: When did you decide to start showcasing your works and getting involved with the art scene?

Dave: I'm not sure exactly how that happened ... I think that getting noticed online and having T-shirts printed through "shirt of the day" sites gave me a little local notoriety -- is that the word? I really don't wanna sound like a pretentious art fucker, 'cause those kinda folks leave a bad taste in my mouth.  Honestly, I don't really know. I was hesitant to showcase my work locally. I really didn't think SLC would receive my "art" the way the toobs did; there didn't seem to be much interest. However, I was lucky enough to have a solo show at Copper Palate Press last October, which, much to my surprise, was super successful -- at least, I thought so, and when there is a show locally that fits with my "thing," I do my best to see if I can get involved.

Gavin: What were some of the early reactions to your works, and how were you received by both the art community and the geek community, as well?

Dave: Here is the thing about the "art" community: There seem to be rules, guidelines and restrictions. For instance, I've heard the following: "You made that on the computer. That's not real art!" And plenty of other jabs of the same ilk. So, really, the art community, although inviting sometimes, can be a bit of a downer at others. As far as the "geek" community: YES, nothing but fucking accolades and assistance from those cats!! LOVE YOU GUYS!! Without you nerds, I'd just be another dude that makes crap people don't like.

Gavin: How did the idea for GeekLeeTist come about, and how was it launching the website to the public?

Dave: Drugs. HAHAHA ... during a session the name came to me. I couldn't believe the name wasn't taken or the URL ... and TAAAAADAAAAA!! Sadly, with any handle you may regret it later. For instance, it makes me sound like I'm some sort of elitist asshole, like I mentioned earlier. But... you're stuck with it after people get to know who you are by that handle. Website is a huge success and, again, I thank my NERDS!

Gavin: What's the process like for you in choosing your subjects and creating the piece?

Dave: Oh, no process really. For me, it seems to be more about an inside joke or a name for a piece that I come up with. I'm just trying to have fun with what I can do.

Gavin: Do you usually stick to the original joke or does it tend to evolve into something else along the way?

Dave: HAHAHA ... yeah, sometimes shit can totally change. But if the joke is solid, you have to keep plugging away at it until you can make the joke funny visually.

Gavin: You do a lot of stuff that touches on things like Star Trek, Firefly, Riddick, Dr. Who, but your biggest focus over time has been Star Wars. What is it about that specific franchise that inspires you and draws you in?

Dave: I've talked about this quite a bit, and I think I've got it narrowed down to how impressionable I was in my youth. When that shit came out and I was a little nerd, there wasn't a single thing in the entire world that was cooler or more inspiring. That's just carried through to the now-a-day times.

Gavin: How has it been for you working with places like Copper Palate Press to produce and sell some of your works to a bigger local audience?

Dave: It's been absolutely fantastic. Period.

Gavin: Your website has branched off in recent months to become more than just a shop for yourself, but also for art and pop culture you find entertaining. What influenced the change?

Dave: Oh, it's always been like that! Initially, GeekLeeTist was just a blog showcasing artists from around the globe that make my pants tight with the pop-culture-related pieces, shirts, sculpture, etc. My own art wasn't part of the website until I got the balls to throw it out there to the world.

Gavin: SLC is going through a kind of geek-art renaissance at the moment, with galleries opening themselves up to more of these types of works. What are your thoughts on the work coming out of the scene, and do you feel we're seeing enough art or could we be seeing an overload in the future?

Dave: With "geek" being so chic, I fully expected this. But I say RAD! There are some AMAZING geek artists here in town and it's always a pleasure to work with them or be shown on the same wall. Oh, of course, there is/will be an overload. I'm sure many of your readers already think that. Let's take Star Wars, for instance. Not a single fucking day goes by without some new sort of Star Wars product being released. NOT A SINGLE DAY! Personally, I think I'm losing interest in the canon as a result. Same goes for Dr. Who/Walking Dead ... the entire world is being covered in Nerd. I'm more curious to know what you "norms" think of that.

Gavin: Are you looking to expand your pieces beyond simple art and move  into merchandising or limited prints, or do you feel good making what you're creating now?

Dave: I'd love and welcome any change/merchandising that comes my way. I've created for various websites, etc., but nothing exclusive has popped into my lap. I'm just gonna keep doing what I'm doing; since it's really just an outlet that just so happens to be cool currently doesn't mean it'll always be like that. But here is the thing about me: You don't like me? Fine. You like me and what I do? Awesome ... come over, we'll draw! So, like I say: This art is the nerd shit that bangs around in my skull and I need ta get it out.

Dave: Well, the year is almost over. Fucking winter is coming, as well as the dreaded holidays. But I'll be blogging like crazy, and I've set a goal for myself: one new thinger a week, artwise.

Dave: Monster Show and Blonde Grizzly Friday, Oct. 19. I co-host the Because Why Not? Podcast, where we talk about all things nerd. Also, any of you nerds who ever feel the need to get that tattoo you've been wanting from your favorite fandom: Jon McAffee of Heart Of Gold Tattoo!!! Check out my sites via Society6, Etsy and my Tumblr.