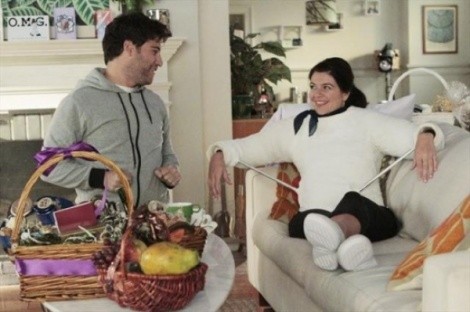 Happy Endings (ABC) Season Premiere: Sure, Tuesday nights between Dancing With the Stars and Private Practice seems like a cushy new timeslot, but this means Happy Endings and Don’t Trust the B in Apt. 23 are going up against like-minded Fox comedies New Girl ---and (eventually) The Mindy Project—glass half-full, they’ll collectively crush Go On and The New Normal (or My Family Recipe Rocks!, locally) on NBC. Glass another quarter-full, this moves ABC’s raunchiest/funniest sitcoms away from the staid likes of The Middle and Modern Family on Wednesdays. As Season 3 opens, exes Dave (Zachary Knighton) and Alex (Elisha Cuthbert) are doing it again but keeping it—new catchphrase alert—“cazsh,” and Penny (Casey Wilson) is in a full-body cast, because how else is Max (Adam Pally) going to reenact Misery on her? Good times.

Don’t Trust the B in Apt. 23 (ABC) Season Premiere: The surprise hit of last spring only had a six-episode first season—will Don’t Trust the B in Apt. 23 hold up for 13 to, dare to dream, 22, this time around? It will once we get this out of the way: Against Chloe’s (Kristen Ritter) advice, June (Dreama Walker) convinces pal James Van Der Beek (James Van Der Beek) to stage a … Dawson’s Creek reunion! No sign of Katie Holmes, but at least Busy Phillips shows up, as do non-Creekers Mark-Paul Gosselaar (Saved by the Bell) and Frankie Muniz (Malcolm in the Middle). The ’90s are just a blur to me, anyway, so this makes complete sense.

Sons of Anarchy (FX) According to show boss Kurt Sutter’s tweets (@SutterInk), tonight’s Sons of Anarchy will not only feature the tunes of Soundgarden and Iggy Pop, but also guest star Joel McHale getting “fucked up.” Sold! Also: After a couple of weeks stuck in the bar, Sons of Anarchy is back in the theater and on the big screen at Brewvies Cinema Pub (677 S. 200 West; 21+) tonight at 8 p.m., presented by City Weekly, True TV, Brewvies and whatever I’m drinking (most likely a Bohemian Pilsner).

TV Culture Happy Endings Don’t Trust the B in Apt. 23 Sons of Anarchy Video
Prev
Next