The Utah Blaze Had Open Tryouts ... I Didn't Make The Cut | Buzz Blog

The Utah Blaze Had Open Tryouts ... I Didn't Make The Cut 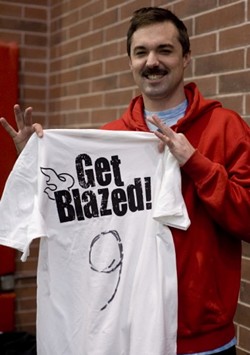 When I received an e-mail from the Utah Blaze announcing open tryouts, I immediately thought of the movie Invincible starring Mark Wahlberg. In a nutshell, it's about a schlub bartender who tries out for the Philadelphia Eagles and, despite remarkable odds, somehow makes the team. —-Since people have always told me I’ll never amount to Mark Wahlberg, I knew this was my one chance to prove them wrong and achieve a lifelong dream of mine. Or, at least a dream I’ve had since I read the e-mail announcing the tryouts.


Do I know anything about arena football? No. Did I ever play football? No. Did I train? Jog? P90X? No, no and, of course, not. My only preparation involved a warm-and-cheesy Egg McMuffin, a cup of coffee and a quick viewing of that Under Armour commercial where a ‘roided-up meathead yells, “We must protect this house.”

Upon arrival at Spence Eccles Field House last Saturday, I realized that I would not be protecting anyone’s house. If anything, I was a bit shocked at how insanely fit and focused everyone was. Since I’m tall and lanky, I figured the only position I had a chance at was wide receiver. But when we divided into groups based on positions, I realized it didn’t matter. To put it in layman's terms, there were a few players in my group who could have easily kicked my ass … with their ass.


Most of the guys had played college football or at least high school ball and a few were even ex-NFL players… and then there was me. I played soccer 12 years ago. Skinny, out of shape and having no idea what was going on, I felt like a kid who was only there because of a grant from the Make A Wish Foundation. But don’t get it twisted, I gave it the old Wahlberg try. The following video sums it up nicely:


Like the Presidential Fitness Test, tryouts were a beast. The afternoon was spent doing physical tests like the 40-yard dash, broad jumps, shuttles and position-specific drills. For some, it might be their last shot at professional football. While in line for the 40 yard dash I overheard a group of guys discussing how long they've been training, blurting out numbers like 10 months, a year, forever. "How about you man?" One guy says to me. "How long you been training?" I shrugged my shoulders and said, "Uhh, today." Once I realized how important the tryout was to these players, my goals quickly shifted from screwing around to staying out of their way, trying not to look stupid and no matter what, at all costs — to not get seriously injured.


Unfortunately, I accomplished all of these goals except the stupid part. At one point, Utah Blaze quarterback and 2012 AFL MVP Tommy Grady pulled me aside and said, “Your mustache is slowing you down, buddy.” I responded, “Naw, man, if anything, it helps the balls gravitate to my face.” I immediately regretted that statement.


Despite my ball-'stache and inability to do anything well, I made the first cut. This decision was an obvious assist by the coaches to help me write this story. But nonetheless, I proceeded to run the routes and attempted to catch passes from Grady and a few others. Not surprisingly, I only managed to haul in one pass, and when it hit my bare hands it stung like a bag of bees.


It was becoming clear that my time at the big dance was coming to a close. I wasn’t gonna make it past the next round of cuts. Basically, my wide-receiver skills were garbage, my fitness scores were crap and the coaches wanted to start focusing on “real” players. To illustrate my point, I made a graph with my puny writing arms. All of my physical tests were completed twice, so my best attempts (in pink) are shown below. Plus, to give the graph some scale, my stats are side-by-side with NFL defensive tackle Dontari Poe’s numbers from the 2012 NFL Combine (side note: he’s 6'4" and 346 pounds).

After I was cut, I chatted with Utah Blaze owner, Kristen Murdock. We talked about arena football and about how she'll never allow her players to wear white pants at away games (when they get sweaty they become see-through—she is not OK with that). But eventually the conversation turned to ripping my self esteem to shreds. She told me, “When I got here, I looked at all the players, and I thought ‘Well, this is a good group.’ Then, from across the field, I saw these skinny, little, pasty-white legs, and I was like, 'Who the heck is that?!”


“Really? You were blinded by my pasty legs from 100 yards away?” I asked. “Yeah, yeah,” she said, laughing. “Well, you don’t look like a football player, and you’re just not very good.” Normally, I would be upset if some random lady insulted my calves. But Murdock’s brutal honesty only confirmed what I already knew: I’ll never be Wahlberg. And to be honest, I’m OK with that. I may have lost a little dignity that afternoon, but I now respect the hell out of arena football. Who knows, maybe someday I can fulfill my other dream... professional mascot.