It's The Most Spookiest Time Of The Year | Buzz Blog

It's The Most Spookiest Time Of The Year 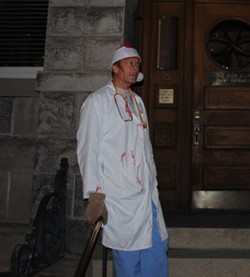 We've all heard the famous Christmas song, “It’s the Most Wonderful Time of the Year” by Andy Williams. I’ve never thought much of this jingle because for the longest time I didn't know the words. ---But did you know that there’s a line that goes, “There'll be scary ghost stories and tales of the glorious Christmas' long, long ago?” Yes, you read that correctly, it says “scary ghost stories.”

I suppose I’ve neglected this line because whenever it came on I just washed it over with whatever was on my mind at the moment. “They’ll be merry crunch berries of glorious Christmas’ long time agooooo!” Anyway, when I realized this song wasn’t referring to stale kid’s cereal, the only scary story I could think of was the Christmas Carol, or maybe that tale of the pink-faced fat man who busts into your house and eats all your junk food. Other than that, who the hell tells ghost stories at Christmas?

Well, with very little Interneting, I discovered that the tradition of telling holiday ghost stories actually dates back to Victorian-era England. I’ll try not to bore you to death with a bunch of history mumbo jumbo, but here’s what happened: A long time ago, the Christians dropped an elbow on paganism. So, in an effort to make them feel better, they adopted some of the pagan-y junk they thought was appropriate for church, i.e., holly berries, yule logs and, of course, Santa Claus. But when it came down to the pagan tradition of spooky stories about winter-solstice murder gods, the Christians were a bunch of party poopers. I’m partially OK with this, because I’d rather not sit down to a 24-hour TNT marathon featuring this thing: 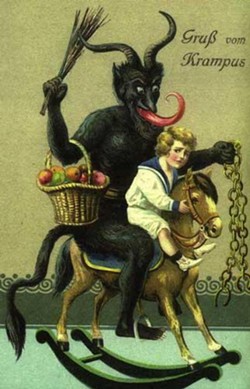 Forget about coal. This old bastard goes by Krampus and he drags bad kids off to hell to spend Christmas in his stomach. Photo via Wikimedia Commons


So, where does that leave us? Well, instead of a jolly old Christmas Satan, we’re stuck with a candy-coated holiday and an outdated jingle that doesn’t makes any sense. However, it's time to praise Krampus because there’s a ghost-tour company in Salt Lake that’s trying to bring “the most wonderful time of the year” back to its true pagan roots. It's called Grimm Ghost Tours and it recently launched a Christmas Ghost Tour of Salt Lake City.

I met up with Grimm’s last Friday for its inaugural tour. Our guide was a local actor named Kory Koontz, who, when in character, goes by Dr. Kor Daver. For an hour and a half, Dr. Kor Daver guided myself and roughly 10 others on a historical tour of Salt Lake City’s most nefarious locales.

Now, it should be said that you don’t need to be a paranormal enthusiast to enjoy this tour. For me, the best part wasn’t the ghosts (even though we didn’t see any). If anything, this is the only tour I’ve been on in SLC that is actually packed with real history… well, Salt Lake City’s weird and disturbing history. But it’s great. Dr. Kor Daver spills the beans on SLC’s best murders while you sit comfortably in a warm bus and listen to Christmas jingles. So, without wasting anymore of your time, here are a few spooky highlights with some Andy Williams background music:

Energy Solutions Arena -- Besides being haunted by the ghost of Karl Malone’s cologne, the arena, it turns out, may be near an ancient burial site for the Fremont Indians. Back in 1998 while excavating South Temple for the TRAX line, construction workers found an American Indian corpse between 300 West and 400 West). Word has it, if you go down to the basement of ESA you can hear their drums. This explains why the Jazz lost in the 1998 NBA Finals and have yet to win a NBA championship.

The State Capitol Building -- “Often, this building is used for school dances,” pointed out Dr. Kor Daver “and when kids sneak off to make out in its many corridors, there've been reports of hearing footsteps sneaking up behind them. We think they’re dead senators.” As scary as this is, senators creeping up on underage kids doesn’t surprise me at all, especially in a Red state.

The Farm House at This Is The Place State Park -- Brigham Young had 27 wives; one of them was Anne Eliza, and she was actually the only one to divorce him. She was also a great cook, and every once in a while, it is said you can smell her cooking at the farmhouse. Basically, Brigham Young was so pissed off at her, he banished her to the kitchen for all eternity.

The Governor’s Mansion -- Despite common belief, the electrical fire of 1993 wasn’t started by faulty wiring to the Christmas decorations in the Grand Hall. Nope, it was started by the ghost of the old groundskeeper, who apparently didn’t like Gov. Leavitt’s taste in tree decorations. Either that, or it was the ghost of Democratic nominee Stewart Hanson. Both theories seem reasonable.

The Alta Club -- Back in the late 1880s, this private gentlemen's club was filled with powerful businessmen and community leaders. That said, the club also had its fair share of prostitutes. On the outside of the building, you can still see the scorch marks from a fire started by an old man’s cigar that almost burnt the place down after he fell asleep. Allegedly, the fire resulted in his death as well as a few "ladies of the evening." Oftentimes, residents can smell the cheap perfume of all the ghost 'hos and even smell the guy’s cigar smoke.

Remember, if it were up to the pagans, we'd all be scared shitless this Christmas, so for more info on tickets, schedules and all the other Grimm tours, visit its website.