In the wake of GoGo37 closing down, two things were made very clear about parts of Southern Utah: Local government needs an enema and those cities need music venues. --- The music scenes in both St. George and Cedar City have been on a steady rise, but with few options for a local spot to check out music, much of the area is left with musicians being forced down to Mesquite or to trek north to Provo. Neither is really a viable option for those with little cash, so the move to make easily accessible venues for local music got a shot in the arm with GoGo. 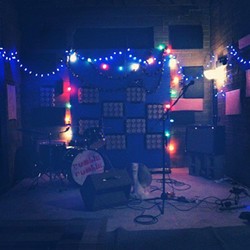 The latest venue to enter the fray is a Cedar City location called the Busta Crack Shack, a small venue in a section of town they're hoping to revitalize with some local music. Today, I chat with the two men behind the new venue, Jared Montgomery and Kourt Osborn, about starting up the Shack and their goals for the place. (For this interview, both men chose to answer as a group. All pictures courtesy of BCS.)

Gavin: Hey, Kourt and Jared. First thing, tell us a little bit about yourselves.

BCS: We met one day at Princess School when Jared commented on the astounding beauty of Kourt's tiara. Likewise, Kourt adored Jared's matching shoes and handbag. From there, we decided to form a band so the world would know the plight of being a pretty-pretty-pretty-princess.

Gavin: How did you first take an interest in music. and what were some early influences on you both?

BCS: This is a good question. Jared's parents got him a snare drum and fostered a love of progressive rock. Kourt's mom had lots of CDs. Most of them sucked -- early '90s pop music, no Paula Abdul.

Gavin: What drove each of you toward local music, and who are some bands and musicians you've come to appreciate out of the local scene?

BCS: Pure animal magnetism. Kourt started playing open mic nights a long time ago. He sucked. There was little-to-no music scene in Cedar City for anyone under the age of dirt. Then he roped others into his scheme for open-mic suck, and slowly formed a band and made friends. Suddenly, we started throwing our own shows. The local record store, Groovacious, definitely got us into the community surrounding local music, particularly by introducing us to some of our favorite local bands such as The Kris Special. They are from L.A. but we saw them play at Groovacious and fell in love with them. They play out here all the time, and have influenced our aesthetic and ethic.

Gavin: How did the idea come about to start up a music venue, and where did the name come from?

BCS: The Crack Shack was our practice space, and everyone was not wanting to play in Cedar City. We ran out of room in our apartment for all the people that came to the shows, like, all eight of them. The Crack Shack is this abandoned garage behind our apartment. Crack heads have literally lived in there. Everyone called this magical place the crack house. One special day in January, Arroyo Deathmatch started a Crack Shack chant. It has been the Crack Shack ever since. It was a free space on our property. It was a win-win-win-win-win. We all win!

Gavin: Considering all the locations across Utah, why did you decide to stay in Cedar City and open a new one there?

BCS: We go to school at Southern Utah University, God knows why.

Gavin: What was it like turning the building into a venue, and what kind of challenges did you run into during the process?

BCS: This is also a very good question. Our front wall fell over in a mediocre windstorm in the fall of 2011. Jared and Kourt were both nearly killed in the process of repairing it, after a rogue garage door decided to enact his hatred. Since the building is all brick and concrete, it was hard to soundproof the space; we are still soundproofing. All the windows are broken, and the roof leaks in the Green Room. Did we mention that people did crack back there? Also, asbestos. We think people do that, right -- asbestos? I can tell, they do. As far as what it was like, it has been like a time. 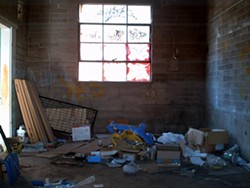 Gavin: You opened the Shack earlier this year. What was the response like from the community?

BCS: We had been throwing shows in and around the Busta (our apartment building) for a while. And by "we," I mean someone. Throwing shows out back in the Crack Shack was an easy transition.

Gavin: Who are some of the bands who have come through and played since opening, and what has the response been like from visitors from the Provo and Salt Lake City scenes?

BCS: S.L.F.M., The Kris Special, The Mooks, Cuddleslut, JAWWZZ, Arroyo Deathmatch, Hug-of-War, Run-on-Sunshine, Burn the Gallows, Fort Wilson Riot, Trap Her Keep Her. PJ Franco and the Burnouts. We think they like us. Some of them have come back -- well, at least the ones that the Crack Shack didn't kill for ritual sacrifice. They never left us.

Gavin: Considering some of the issues other venues have had operating in Southern Utah, what have you done to make sure your place has some longevity?

BCS: We are completely under the radar for most of the population of Cedar City. We also aren't operating a business. It is just about music.

Gavin: Are there any plans on your part to expand beyond what you're doing with the place yet?

BCS: Our lawyer says we shouldn't comment on this. 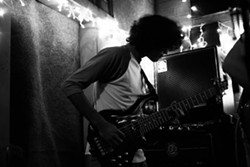 Gavin: How can people who want to perform at the Shack get a hold of you?

BCS: They can e-mail bcspresents@gmail.com with the subject "booking." We also accept smoke signals, and semaphore, but not Facebook messages. Mark Zuckerburg eats them and we never get to read them.

Gavin: Moving on to statewide stuff, what are your thoughts on the Utah music scene, both good and bad?

BCS: Anti-fun laws. Kids literally could not dance at the former GoGo37 in St. George. Cedar City, luckily, doesn't have those type of laws in place. However, there is a "reasonable noise" ordinance in place, which can make it difficult for new venues to open in town. We happen to be lucky that there are no regular residential lots surrounding the space, save for our own apartment building. It has been difficult to incorporate all the small music cliques in town, i.e. the hardcore scene, ours, and the old bar guys. Throughout the state, it can be hard to throw house shows because of local noise ordinances and uptight neighbors. We started our space because there was no place in town for DIY and independent bands to play. Or, in a different version, there were no places to see weird bands. Since Cedar City is small, it was easy for us to gain a following fast.

Gavin: Who are your favorite acts performing both in Southern Utah and from around the state? 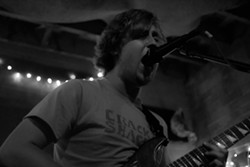 BCS: Not a lot. Meaning, we don't think about it a lot. There aren't any labels really operating down here in the hinterlands.

Gavin: What can we expect from the Shack and the two of you over the rest of this year?

BCS: The Kris Special. They are the best band in the world. Also, if you are in Cedar City, buy some records at Groovacious Records, also on 100 West. Dry the Wetlands!