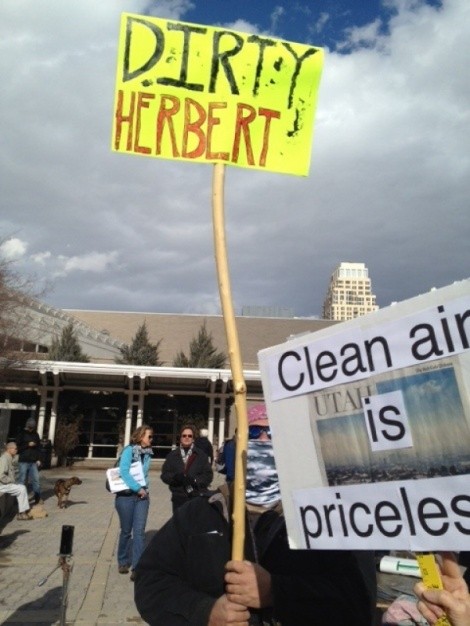 Attendees of Gov. Gary Herbert’s Energy Summit were welcomed this morning by protesters with fake pitchforks and torches. During the summit, more than 100 persons rallied outside and listened to speakers blast the governor’s fossil-fuel-favoring energy policies.---

Ralliers took picket signs reading “Don’t frack with Utah!” and “Your Children Are Breathing Your Mistakes,” as they challenged Gov. Herbert’s summit held at the Salt Palace Convention Center Thursday by raging against everything from planned Green River nuclear-power plants to tar sands mining to Utah’s smog-ridden and gravy-thick air.

It was a rally that presented many different critiques and presenters appealing to a wide variety of Utahns fed up with a lack of state leadership on environmental issues. Caroline Gleich, a Utah native and pro-skier, challenged that climate was hurting Utah snow and damaging Utah’s vital tourism industry as a result, arguing that “snow equals money.”

“2012 was the warmest year on record and, personally, we saw the lowest snowpack here [in Utah] in over a decade,” Gleich says, adding, “We don’t want our ‘Greatest Snow on Earth’ license plates to be a relic of the past.’”

Jay Banta of the Utah Back Country Hunters and Anglers group argued that Utah’s rich heritage of fishing and hunting is threatened without “clean air, clean water and pristine habitats.”

Matt Pacenza, director of HEAL Utah, the advocacy group that orchestrated the rally, railed against the idea of nuclear reactors in southern Utah, while Claren Alldredge, a physician and member of Utah Physicians for a Healthy Environment, likened Utah’s air pollution to cigarette smoke, pointing out that Utah’s air pollution could take two years off a person's life, compared to eight years of life lost for a person smoking a pack of cigarettes a day.

“Air pollution is at least as evil as second-hand smoke. We were among the first to pass an indoor-clean-air act, now we need to clean up our outdoor air,” Alldredge says, before listing off more than a dozen ailments linked to air pollution including birth defects, lowered intelligence, autism and attention-deficit disorders.

While the speakers argued for the state to give more than token considerations to renewable energy and to stop expanding coal plants, among other topics, they all united in their lack of enthusiasm for the leadership example of Gov. Herbert, leadership that Pastor Erin Gilmore of the Holladay United Church of Christ says requires “strong moral will.”

“It requires a sense of responsibility for the health and well-being of all people, for this generation and future generations,” Gilmore says. “And it requires courageous leadership, and that’s not what I’m see coming from our elected officials.”