No, thanks, I don't need any weed today | Buzz Blog

No, thanks, I don't need any weed today 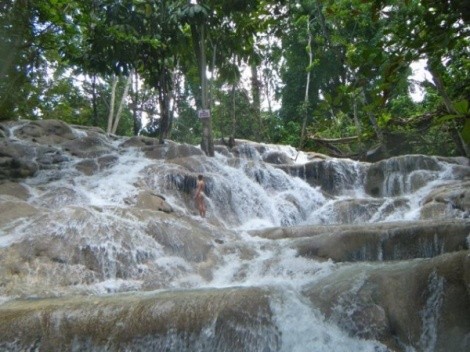 If Dunn’s River Falls in Jamaica didn’t actually exist, some theme or water park would have had to create them as the ultimate way to entertain their guests. The area just outside of the port city of Ocho Rios features water running just fast enough to be interesting, but just slow enough to allow people to get through it. --- That water runs over rocks sloping just gently enough upward to make it an interesting climb, but not so difficult as to require any special equipment. There are various pockets and pools of water along the way where you can stop and let the falls run over you or simply soak in the sun and scenery. As if that weren’t enough, the falls are beautiful, surrounded by tropical greenery and running into a stunningly blue ocean. It’s as if God said to himself, “I want to create something that’s fun and beautiful and that most people can do.” 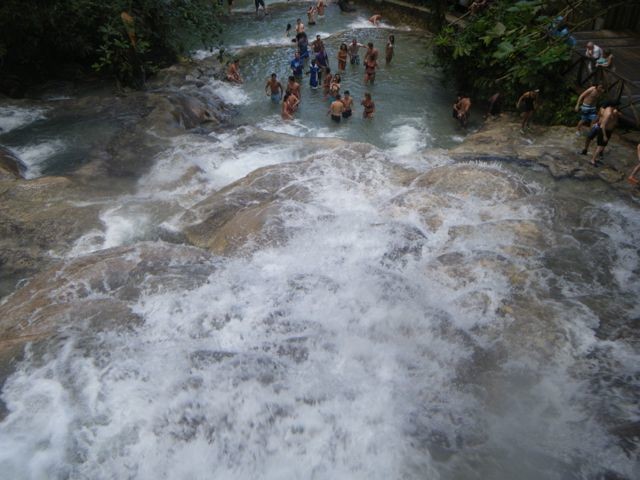 The climb itself takes around an hour, gradually moving about 600 feet with stops in the pools and time to take pictures. The falls is a sort of national park for Jamaica and they will only let you do the climb as part of a guided tour, which makes things safer, but also takes away some of the sense of adventure. The falls can also get pretty crowded at certain times of the day. Despite such “touristy” aspects, it’s still so incredibly beautiful, it’s one of those things you just have to go see if you’re in the area. The main reason something becomes a big tourist draw is because “nobody else has one,” and that’s the case here.

Part of the fun when we went last week was getting to take a catamaran from Ocho Rios to the falls -- there are other ways to reach them -- with reggae music blasting all the way. On the beach before and after the climb, we were approached several times by young men. One veteran visitor told us, “Watch, the questions come in threes.”

First question - “How you doing, mon?”

Second question - “You like this?” This question comes while some trinket is being offered.

Yes, we were in Bob Marley’s home country, and we’ve had similar experiences with other drugs being offered at other beaches in other nations, but the whole thing can still seem a bit bold to most Americans, particularly when it happens time-after-time in one place. A person we were with suggested that we could make a fortune at the port selling T-shirts to tourists that read, “No thanks, I don’t need any weed today.”

Despite declining the ganja, there was still plenty of fun to be had on the catamaran trip back, as the crew began doling out free rum punch followed by getting people on the front of the boat for dancing. You pretty much can’t avoid having fun somehow in the home of reggae.