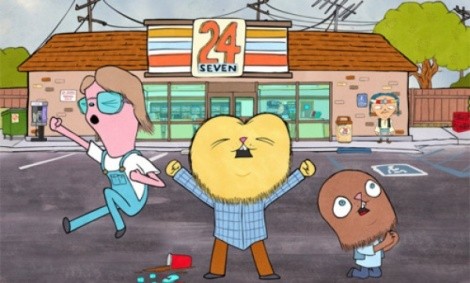 What’s new on the happy screen this weekend:

Out There (IFC, tonight) Series Debut: After Portlandia, it’s the kinda-premiere of new animated series Out There, about small-town kids who look like weird, brightly colored blobs. ---But, if you like it, you’ll have to wait till February for more episodes. Great plan, IFC—almost as good as pulling all the video promos offline … dumbasses.

Cyndi Lauper: Still So Unusual (We, Saturday) Series Debut: In this new reality series, we learn that ‘80s pop star Cyndi Lauper is not only still so unusual, but also still alive.

The Golden Globe Awards (NBC, Sunday) As you may have heard, this year’s GGs are hosted by Tina Fey and Amy Poehler. So just fast-forward to those parts.

TV Culture Out There Banshee Girls Shameless Video
Prev
Next