Hello to all you scarf-wrapping, shovel-digging, salt-sprinkling, tire-chaining, why-the-hell-does-everyone-forget-how-to-do-this-every-year enthusiasts! --- It never ceases to amaze me that every year in this city, an area prone to heavy snowfall, we find ourselves digging out of the snow for a couple of days and we still haven't figured out how to behave and get our shit in gear to be courteous and help each other out in what is essentially a city-wide crisis. Take five minutes and think about how you drive, or shovel someone out, or just throw some damned salt to help the rest of us out! In lieu of a 337 update, which doesn't look like it will be updated anymore, here's a City Council pin I recently acquired that I'll be wearing around town for a while as I petition to get the park near me have its named changed to “Sheehan's Spot.”

A couple of things to address, if you're a local musician: Get off your ass and submit an application to the Utah Arts Festival! Every year, this festival gets better and better on the music front and is one of the best chances a lot of local musicians have to make an impression on the state as a whole. What better show than to perform in front of potentially thousands of people in a short time span with lots of art around you? As a matter of fact, ALL of the applications are currently open for areas such as Fear No Film, Street performers, Dancers, Literary and Culinary arts. Just go apply for whatever you fit into, but most of all, I want to see a flood of local bands this year take over the stages! Head to their official website, click 2013 Applications at the top and fill out a form.

While we're talking about filling out forms, you may have seen from all the ads on the website that the 2013 City Weekly Best Of Utah Awards are now open for voting. This is your chance to voice your opinion about what you believe is the best this city has to offer! Now, you're going to see a lot of pandering for categories out of people and businesses on Facebook and Twitter over the next month, and, yes, I am in the running for Best Local Blog again. But, you know what? I'm not gonna harass you for your vote. Vote for who you believe best deserves the award, and if you believe that's me, awesome. If not, that's cool, too. But no matter whom you vote for, at least vote and make this our biggest online turnout to date!

Switching to a bit of literature, the latest edition of the Sugar House Review is out: Volume #7, covering Fall/Winter '12. This edition includes works from local writers and poets like Jay Hopler, Laura Scott, Rob Carney and Matthew Ivan Bennett. As always, the book is super-cheap at just $7, filled with dozens of works to inspire, influence, and, of course, evoke emotions. You should check out a copy; you can get them at most local bookstores or online in a PDF format for just $2.

Getting to events, this Monday at Brewvies will be the fourth installment of the Channel 801 series. As we talked about with them last month, submit your short film to run in its series, where winners will be chosen from the local film community who are voted to have the best of the batch. Even if you don't enter, the evening's films should be fun to watch.

As usual, I won't be doing ANY film festival coverage over the next two weeks, so don't even bother asking. Instead, I'll highlight some local hits you should be checking out, like Provo's Muse Music's Speak For Yourself Poetry Night happening this Thursday. You can either sign up and speak your mind at the event, or pay $5 to kick back and watch. Either way, it should be a good time, as these events have started to gain popularity.

While we're in Provo, Jan.18-19 will be Velour's 7th Anniversary showcase -- two nights of music to celebrate one of the most well-known venues in Utah County, and home to many local bands who have gone on to do great things on the national scene. This year's festivities include Desert Noises, The Moth & The Flame,The New Electric Sound, Parlor Hawk, Toy Bombs, Deadtooth, Grey Fiction and The Mighty Sequoyah. Head over and check out these shows and celebrate Velour's impact on the community. 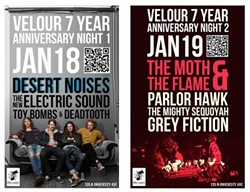 Also on January 19, The Sugar Show will take place at The Rose Wagner. A joint effort between the theater and the Sugar Space, the fifth-annual event will showcase its finalists in the Blackbox in front of a packed audience for a grand prize of $1,000. This year's finalists include Tara McArthur, Sarah Hurwitz/Hula Hoopology, Monica Campbell, and Michelle Player/Tami Whattcott. The show starts at 8 p.m.; get your tickets while you still can.

Most of the following week is dominated by the festivals and surrounding events, but as we enter the clearing, we'll have The BeaST of SB Dance on Jan. 25. Every year, the dance company puts on what it calls the “mega-cluster-combo” of performances, showcasing eight dancers, two actors and the band Totem & Taboo for you to check out as the best the company has to offer from its recent past. Tickets are $15, but for local dance fans, that's a treat as they're literally combining pieces from several shows into one evening. 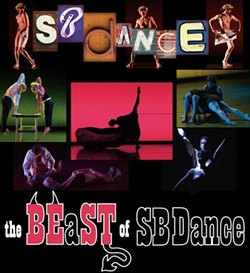 Finally, two weeks from now will be the People's Market Seed Swap, a chance for all you aspiring gardeners and healthy-food fanatics to bring all your unused seeds from the previous year and find something new to grow. Even if it's just flowers, you'll find several potential trades at your feet from people looking to grow something fantastic this coming season. This year's swap will take place at the Sorenson Unity Center from 2-6 p.m.

As for the blog: The next couple of weeks are up in the air, as the snowstorm didn't just hinder traffic, it actually killed some interviews and canceled a concert I was planning to cover on Friday. So, a lot of what I have planned is up in the air. The next two weeks will mostly focus on art, podcasting and brand-new performances. As always, we'll see what happens.