Don't throw out those Zoobas just yet -- there's a far worse fashion trend that is poised to destroy the world of pants as we know it. What I'm talking about here is men's leggings, street name: Meggings.---Note: If you came here to say men have been wearing leggings since the dawn of kilts, then you'd be correct. Lots of people enjoy leggings. But meggings aren’t worn in the same way as your typical jockey, male modern dancer or even Batman-style tights. No, they’re used as straight up pants. Yes, men are wearing stretchy pants ... to work ... like the Scarlet Pimpernell.

Start off by imagining a grown man wearing typical guy clothes up top. Now, as your eyes move south, they rest on a bulgy pair of lady leg; basically, something like mid-eighties Rod Stewart. Originally spawned from Japanese hipsters, the word "meggings" plays off its older brother "jeggings" (or tights that look like denim). They’re designed to simultaneously piss off xenophobes while creating an illusion of a tighter-fitting skinny jean.

Over the past month or so, you may have noticed celebrities like Lil Wayne, Justin Bieber, Russell Brand, Kanye West and any other person you’ve ever wanted to punch in the face sporting meggings:

Skip ahead to 2:50 to see Beiber's leopard-print meggings -- or don't.

I should point out that I've never had anything against meggings and the people who choose to wear them. Except for everyone I just mentioned above, I'm pretty sure they are all literally made of shit. But in truth, it takes a lot of brass to walk around in public with your camel tail on full display. Whether you hate 'em or not, there's no denying that spandex pants are comfortable, supportive and you get a full range of mobility typically reserved for short-shorts.

I suppose I’ve always hated the word ... meggings. It implies that men have "megs" instead of legs. It’s awful. If the fashion industry really wants these babies to catch on, they should change the name to something like Tactical Urban Leg Garment. Because you know if that were the case, we’d see grizzled old men carving canoes in TULG’s this very moment.

So, to fully understand the ins and outs of male pants ambiguity, I decided to go against my better judgment and wear my girlfriend’s leggings, err meggings, for an entire day. Aaaaaand, here we go:

Once I got to work, I eased into meggings by starting off with the shorts-on-top look. There’s something about meggings that makes you want to stretch constantly. I mean, really, the meg-stretching is amazing. 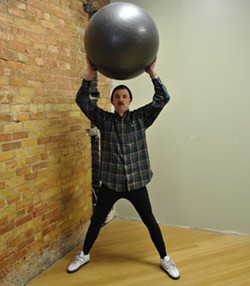 In the afternoon, I ditched the shorts and I was feeling good. But, I was definitely apprehensive to go outside. I could visualize people across the street saying, “Whoa, look at that guy’s urethra.” 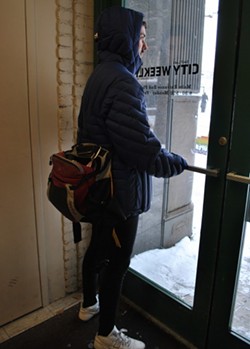 At first, wearing these things in public was tough. But the meggings were surprisingly warm and ended up being a trusty ally against snowstorm Gandalf.

After a while it dawned on me -- why are women always wearing yoga pants in public? Because they’re are really damned comfortable. In fact, meggings almost feel like you’re wearing nothing at all.

Later on, I questioned whether or not I was really pulling it off...

Then I saw myself in the mirror ... and I looked awesome. 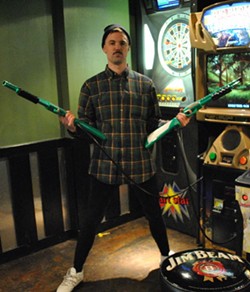 After a beer or two, I was ready to see what these babies could really do.

In a pair of ice skates, the meggings felt right at home.

As for wearing them for a full day, I wouldn't recommend it. After work, I went and saw Django Unchained (which is three hours long by the way); about halfway through the movie the itching began. The pants turned from comfortable to suffocating. I considered ripping off the meggings and sitting in the theater pantless, but that was not an option. So, I just sat there, riding it out while vowing to never make this mistake again.

Will meggings ever catch on? We'll never know. Questions like this will be answered by our children and our children's children. But if we've learned anything from Star Trek, eventually, men and women of the future will  be wearing the same outfits -- tight-fitting leggings with matching tops and communicator pins. If meggings are the first step to dressing up as Capt. Kirk, then perhaps we shouldn't write-off meggings just yet.