While much of the stand-up comedy is based out of Salt Lake City, we forget that both Provo and Ogden have become comedic hubs in their own right, producing comedians who have created big laughs at the clubs and on the indie scene. --- Many of the Ogden-based comedians have taken full advantage of having a Wiseguys location along 25th Street, including Josh Fonokalafi, who has earned a name in his hometown and become a mainstay to the most northern of the clubs. Today, I chat with him about his career and thoughts on the local stand-up scene. (Photos courtesy of Fonokalafi.) 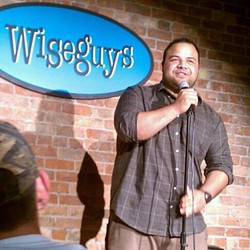 Gavin: Hey, Josh. First thing, tell us a bit about yourself.

Josh: I’m the youngest of four siblings, and I moved back to Utah after being dumped again and crying a whole lot. You want to ask me anything else regarding reasons I cry?

Josh: My family is only good at expressing two emotions: anger and happiness. Both events are met with lots of noise, and I’ve been told that my family are really good laughers. When I was 6, my dad brought home a VHS copy of Bill Cosby: Himself. I was impressed with how one man could be the source of so much laughter and happiness. I think that’s the earliest memory I have of wanting to make people laugh; also, to stand on a lifted platform above people. In middle school, I was introduced to Brian Regan’s comedy and he quickly became my favorite for years. In high school, Christopher Titus and Mitch Hedberg were added to that list.

Gavin: What officially brought on the decision for you to attempt comedy as a career?

Josh: There wasn’t a lot of encouragement for me to continue comedy when I first started. Really, the main support came from my sister Lesila. It wasn’t until I made my dad laugh at a showcase in downtown Portland when I thought I might actually be somewhat good at comedy.

Josh: When I started, everyone told stories about how hard it was to get noticed. I would read articles and watch interviews of comics talking about how many years they did open mic before they got noticed to start hosting or to do a three-to-five minute spot at the end of a show. That was not my story. I started getting offered time from Keith Stubbs at Wiseguys to open shows about a month and a half into doing open mic. I remember one of the first shows I was asked to do was a benefit for the Amber Alert Organization. Jeff Clayson, the other comic, told me we were supposed to split 30 minutes. I asked him how he felt about doing 25 minutes.

Josh: There are a lot of comics out there ready to offer advice, pointers, and lessons. Some might not be relevant to everyone, but the few I’ve learned to be pretty universal are: Don’t chew gum, wear your hat high, move the mic stand, talk into the mic and check your zipper before you go onstage. I don’t think you can check your zipper enough before you go on stage.

Josh: Well, it depends on the jokes. Sometimes, I’ll have a really dumb joke about farting or pooping that’ll get a better response than a joke I feel is more clever and personal. In those times, I hate people. Either way, I think it’s hard to decide a joke doesn’t work and throw it away.

Josh: I think, in Utah, the comedy scene is very different from other places. Granted, I haven’t been to every comedy scene in the country; the ones I have been to don’t carry the amount of comradery I’ve seen here. It doesn’t matter if the other comic is a friend, or a person you’re slightly jealous of because he started after you and is seeing way more success than you -- Andy Gold -- you’ll still go hangout at Village Inn after open mic. I’m kidding, of course. Comedy isn’t like a football game or a wrestling match; we’re all friends. Even the competitors are friends.

Josh: I don’t think there’s much difference between Ogden and Salt Lake regarding comics and audiences. I feel, like, if someone is funny then they’re going to be funny and the location doesn’t matter ... unless that location is Provo. People refer to a thing called the Provo bubble, and to a point it does exist. I can’t say that every single person is this way, but generally, if you meet someone from Provo you shouldn’t expect there to be a lot of laughter to happen. Comics from Provo are usually accepted instantly because they know how to cater to the audiences there. Comics from the outside have just as hard a time going to Provo as comics coming out.

Gavin: Are there any plans down the road for you to tour, or are you sticking close to home for now?

Josh: For now, just sticking around here and working. I don’t think I’m ready to do any tours.

Gavin: Going local for a bit, what's your take on the stand-up scene, both good and bad? And is there anything you think could be done to make it more prominent?

Josh: I think the scene here is great. Local comics have a chance here to move up the ladder faster than they probably would other places. Keith Stubbs and Wiseguys give opportunities to people before they’re even ready, and I don’t think that’s a chance other places are willing to take. A bad thing I would say is how few open mics there are here. Open mic is a place for comics and people starting comedy to come and work on things, polish their acts. Without open mics, you just have crappy shows.

Josh: Steve Soelberg, Andy Gold, Guy Seidel ... there’s a huge laundry list of people I could name and I think there’s a few I would still miss. I think, in Utah, we have an awesome concentration of talented comedians. A good place to go Wednesday nights is the Trolley Square Wiseguys for their open mic. A lot of good comics and comics coming up can be seen there.

Josh: I think it’s great when a comic who’s known nationally comes through town. I feel, like, at this point in time no one’s going to come to a show starring Joshua Fonokalafi just because my name appears in lights. But people will come to see me open for Louie Anderson.

Josh: Hopefully, more shows. I’ve also been toying with some YouTube projects, but we’ll see how that goes.

Josh: Probably just my Twitter page. I don’t have many followers and I’m kind of interested to see what it’s like to have a ton of people unfollow me.