We've got a couple of new albums already out, and then three release shows all happening tonight. --- First up on this list is the latest album from Steven Stucki, an acoustic-pop singer based out of American Fork. Stucki has been a fixture in the Provo scene since 2004, but hasn't seemed to break from the Utah bubble yet, which doesn't matter with the fanbase he has there. Last time we heard from Stucki was in late 2010 with his By Myself EP, but last week, he released his fourth album (a full-length, no less) titled Hip & Nerve. You can download a copy off iTunes today.

Earlier this week, the band Koala Combat finally put out their debut album after having a couple of setbacks over the past two years, which included a breakup/revamp, depending on how you want to look at it. Those changes came across last year, making the progressive-metal band with a love for MST3K more focused on the tasks at hand. This past Wednesday, they put out their long-awaited album, Yeah Right. Sadly, there is no online location for this, so you'll have to find a physical copy in person.

Moving to release shows happening tonight, first we start in Logan, where we have the debut album from Little Barefoot. The band is a two-piece effort, with additional interchangeable members who come and go depending on the song but aren't officially a part of the band. The group have been gaining traction up north and have been working on their debut full-length called A Hundred Different People. You can catch them live and pick up a copy tonight at Why Sound in Logan as they play with Goose Chase and Bronze Museum. Just $5; starts at 7. 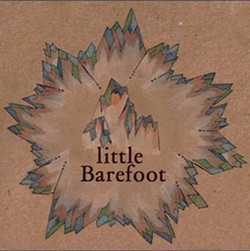 Meanwhile, back down in the valley we have two shows less than a block from each other. The first is from The Pagan Dead, a four-piece metal group out of SLC. The band (seen above, photo via their Facebook) have had a long run in town, going back to 2001. They have had some full-length albums out over the years on a couple of different labels, always changing it up and not allowing themselves to become stale or overplayed. The band has returned with a brand-new full-length release called The One Of The Black Goatskin. You can pick up a copy tonight at Bar Deluxe, as the band plays with Visigoth and Yaotl Mictlan. Just $6, starts at 10.

Then, down the street at Burt's Tiki Lounge we'll see the release show for The Tuxedo Tramps. The rockabilly garage band have been growing over the past few years, making an impact on the rockabilly scene as one of its major players, so it was only a matter of time before they finally put out an album. You can read more about it in the CW Liner Notes post this week from Austen Diamond. The group will be playing their release show tonight with Slick Shifters and Glinting Gems. Just $6; starts at 10.

Finally, a bit of an oddity, a band by the name of Heart Of Gold somehow came across my desk, but I can't find anything on them. They're apparently releasing a three-track EP called Actions & Reactions, which you should be able to download from their Bandcamp page tomorrow. At least, that's what I'm guessing.