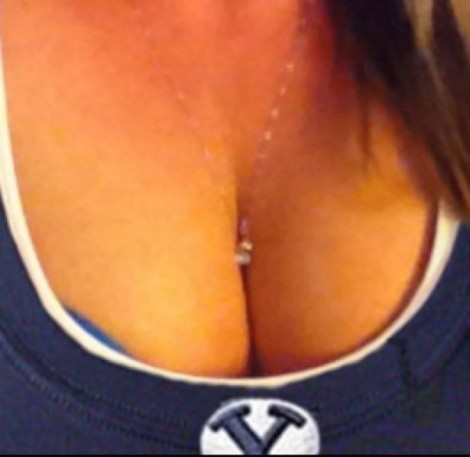 It seems Brigham Young University and the University of Utah are taking their in-state rivalry to new and uncharted territory with the launching of head-to-head Twitter accounts, UU Boobs and BYUBoobs. Though both accounts are not officially related to the respective schools, the concept is to see which school has more "spirit" by seeing who can get more boob pics of women in Utes or Coug gear.---

Though completely inappropriate and wrong on every level, it's not hard to imagine a couple of University of Utah guys sitting in a dorm room hatching up a boob-themed master plan. As for BYU's account, it was probably spawned in some sort of Large Hadron Collider for keywords that could never co-exist in their natural state. "It'll never work! It's too dangerous!" the professor said as he pounded his fist against the dusty chalkboard. "I'll try it," said a soft but confident voice from the back of the laboratory. "I'll make the Twitter account."

BYU and the UofU aren't the first schools to do this. Apparently, it all started with University of Kansas students asking girls to tweet pics in support of the KU men's basketball team. Buzzfeed explains it nicely with a timeline of KU's boobs-for-sports twitter-plosion.

Both BYU's and the U's accounts are only a few days old: The U account was created Jan. 15 and the BYU account was born Jan. 16. So far, both accounts have only duped a few girls dumb enough to send them photos. We'll see how long this lasts. In the meantime, I think both schools could learn something from Seann William Scott's character in the film Role Models: