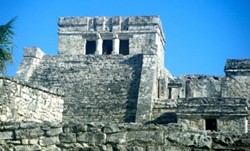 Tulum, on the Yucatan Peninsula, just a couple of hours south of Cancun, is a an archaeological site where you can find stunning architectural wonders left by the Mayans - and, oh yeah, all you have to do is walk down some steps from the ruins atop the cliffs to be at a stunning Caribbean beach. Either the ruins or the waves on their own are reason enough to visit Tulum, but together they present a side-by-side comparison of what God can create and man can accomplish. --- 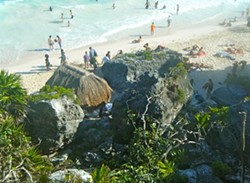 We were there shortly after the whole Mayan Apocalypse thing didn’t happen. The tour guide explained that the centuries old calendars weren’t meant to predict the end of the world, it’s just that 2012 was how far out they had planned things in their cycles, and compared it to when people were writing computer programs in the 1970s and didn’t get around to thinking about what would happen when the calendar turned over to 2000.

Whatever you think about the 2012 calendar, it’s hard to deny that the Mayans had some amazing achievements when it came to calendaring. They figured out how long a year was without a single computer on hand. The temple at the heart of Tulum has 91 steps on each of four sides and one more at the top. (You do the math.) They even found a way to build in a Leap day. You can expect to stand at a certain spot, at a certain hour on a certain day and expect to see the sun in a certain spot. When was the last time you found anything without a GPS smart guy?

The Mayans also had a calendar comprised of 18 months of 20 days each with another five built in. You can buy a plastic one for $1 in a sort of free zone full of shops between the parking lot and the ruins area actually controlled by the Instituto Nacional de Antropologia e Historia. If months and days aren’t your thing, you can also get a traditional Mexican poncho with a Steelers, Patriots or Raiders logo on it.

There are also places to get food and drink. Note that local tradition is to load up margaritas with the equivalent of about six shots of tequila, so you might want to avoid the phrase, “Uno mas, por favor,” unless you’ve got a ride.

We don’t blame the Mayans for what did or didn’t happen on Dec. 21. We’d rather just marvel at what they accomplished and then sit on a beautiful beach below their city.